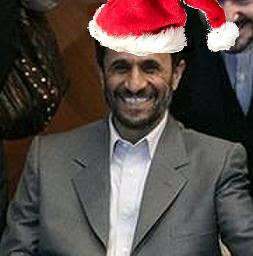 There's a great tradition in this country of banning Christmas decorations, nativity plays and religious scenes in case they "offend" followers of other religions. Of course, the Muslims and Sikhs and Hindus usually aren't offended, and quite often the stories themselves turn out to be exaggerated. The trouble is that there sometimes are council employees, teachers and other assorted do-gooding simpletons who genuinely believe that their scrooge-like attitude is the "right thing to do". There are also company bosses who are looking for a good excuse not to subsidise the annual piss-up.

Just the other day, Equality supremo (and occasional voice of sanity) Trevor Phillips was calling for more nativity plays as a corrective to misplaced political correctness. He railed against "ludicrous paths... populated with winter festivals instead of Christmas celebrations; anodyne messages of ‘seasons greetings’ and pointless embarrassment over biblical nativity scenes."

Perhaps, though, anti-Christmas multiculturalists will heed that respected world statesman Mahmoud Ahmadinejad of Iran, whose Christmas greetings to the world have been published on his much-frequented blog.

"Merry Christmas to everyone! " it begins.

My sincere congratulations to everyone for the Glorious and Auspicious Birthday of Divine Prophet - confirmed and authenticated by Gabriel, the angel of Divine revelation - the Obedient of Almighty God,

Jesus Christ, the Messiah (peace be upon Him)

There follows a lengthy discussion of the importance of Jesus Christ, and an analysis of international politics.

Today’s status quo of the world is obvious of everyone. In occupied Palestine, Iraq, Afghanistan, Africa, and South America and even in Europe and North America, due to the interests of despotic dominant rulers’ parties and clans and also for filling up their pockets, the dignity, benevolence, peace and tranquility of the human beings have been taken to abattoir and slaughtered. And then, lie and deception are positioned for honesty and truth.

Frankly, if Jesus Christ – the Messiah (peace be upon Him) was present today, how would He react?

But he ends on a conciliatory note:

While commemorating the birthday of the Prophet of amity, love and devotion – Jesus Christ, the Messiah (peace be upon Him and His beloved Mother) and congratulating the new year, I beg God – the Merciful, the All-Wise – a year of bliss, and health and a year replete of blessing, abundance, success, and affection for everyone, specially the Christians of Iran and the world.