Away with the manger

One of the Christmas "facts" about which last week's Theos report failed to discover widespread ignorance was that Jesus was born in Bethlehem. Everybody knows that: well, 73% of us at least, which shows that something is sticking, though whether it comes from junior school nativity plays, carols played ad nauseam in the temples of Mammon or something more explicitly religious isn't entirely clear. As that ineffable schmaltz-artist, Luke, puts it,

And Joseph went up from Galilee, out of the city of Nazareth, into Judaea, unto the city of David, which is called Bethlehem... to be taxed with Mary, his espoused wife, being great with child. And so it was that, while they were there, the days were accomplished that she should be delivered.

If you go to Bethlehem (not an easy journey, since it involves negotiating Israel's security barrier and taking your chances among the depressed and radicalised population) then some among the town's dwindling number of Christians will show you a cave with a silver star on the floor where, according to long-established tradition, the Word of God took on human flesh. 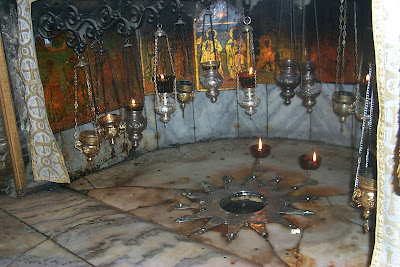 So what, I wonder, is the Vatican playing at this Christmas?

In a radical departure, the official Vatican Christmas Crib has shifted the action to Jesus' home town of Nazareth. Out go the shepherds, the ox and the ass, even the manger. In come a carpenter's workshop, a "covered patio", and "the inside of a pub, with its hearth".

"It was time for a change," said a spokesman "and a return to St Matthew's gospel".

Which is even stranger, since Matthew quite clearly says that Jesus was born in Bethlehem, where, it would appear, Mary and Joseph had been living all along. They only left because of Herod, who is supposed to have massacred all the male children in Bethlehem in a failed attempt to do in the Christ child. Joseph had however been warned by an angel, and took the family into Egypt. It was only some years later, with Herod safely dead, that the family moved to Galilee and "came and dwelt in a city called Nazareth."

Could the new Nativity setting actually be a tacit acknowledgement of one of Christianity's open secrets, that the evidence for the traditional story is non-existent? Jesus was almost certainly not born in Bethlehem. There was no census, no donkey, no fully-booked inn, no massacre of the innocents, no shepherds abiding in the fields. It's all hogwash.

Luke, who claims in the introduction to his gospel to be supplying "the certainty of these things", must go down as one of the most careless historians on record. "This census was first made when Quirinius was governor of Syria", he writes of the event that supposedly brought Mary and Joseph to Bethlehem. Small problem, Quirinius became governor in 7AD, by which time Jesus would have been at least ten, and quite possibly fourteen. And Herod had already been dead 11 years.

And what shall we make of this contradictory passage, from John chapter 7:

But others said, shall the Messiah come out of Galilee? Hath not scripture said, that the Messiah cometh of the seed of David, and out of the town of Bethlehem, where David was?

Which strongly implies that people who knew Jesus were well aware he had never been anywhere near Bethlehem.

It's quite clear what is going on in all these stories. There was a perception, based on the prophets of the Old Testament, that the coming Messiah would be born in Bethlehem. Any would-be Messiah who didn't come from that town would therefore be at a severe disadvantage. If you believed that Jesus was the Messiah you had to account for the discrepancy. Easy: just say that he was born in Bethlehem after all. Make up some plausible story about a census to explain the otherwise inexplicable fact that a family from northern Palestine travelled all the way to the Judean equivalent of Windsor for the happy event.

These facts are easily available to anyone who bothers to find them, and few serious scholars of the New Testament, devout Christians included, dispute them. But officially, churches continue to promote the traditional story. Perhaps the Vatican's Crib redesign is a pre-emptive step, just in case the truth becomes more widely known. Or perhaps the complexities of Middle East politics have a hand in it.
Email Post
Labels: catholicism Christianity Christmas culture history religion