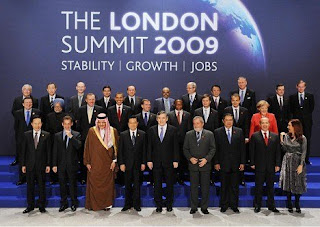 "The Chancellor of the World Exchequer. That is how Gordon Brown appeared today as he delivered his global budget speech at the end of this G20 summit."

Did Robinson think up that absurd comment all by himself, I wonder, or was it written for him by one of his Downing Street handlers? When he began as BBC political editor, he seemed such a refreshing change from the ludicrously biased Andrew Marr. He appeared - to me at least - to be writing his own reports rather than, as Marr invariably did, reading out the Downing Street spin and presenting it as his own analysis. But just recently he has been inserting himself ever further up the prime ministerial rectum, as is comically obvious in this latest dispatch from will surely go down as one of the over-hyped and unnecessary summits since the Field of the Cloth of Gold.

Robinson actually goes on to admit that despite the "nice round headline-chasing figure" of trillion dollar global fund there was no big new stimulus package. Brown, for his part, announced (again) that "the old Washington consensus is over". But as for the "London consensus" he wanted to succeed it, the "chancellor of the world" was full of the usual bluster. "Global problems require global solutions", "trade must once again become an engine of growth", "essential action to rebuild confidence", "no quick fixes". Some changes were announced - in the IMF structure, for example, or the status of tax havens. But nothing that could not have been achieved over the phone. Most of the announcements, whether of money or regulatory changes, came as no surprise. This is modest tinkering with the current system, not a new paradigm, certainly not a "new world order".

The cheerleaders for this budget speech were, though, not Labour backbenchers but world leaders. They have been full of praise for the prime minister - not least the man who's still the most popular politician in the world: President Obama.

That will do Gordon Brown's political standing at home no harm at all.

As what? A good host? An international schmoozer? In truth this summit will soon be forgotten. The expectation - whipped up mainly by the World-Chancellor himself, of course, and his cheerleaders in the BBC - was that the London G20 summit would mark the start of a new economic consensus, a fundamental change in the nature of the world economy. That may still happen, of course. But it didn't happen today, and it won't happen because of this summit. The fact that there were no rows, no walk-outs, no deadlock is proof enough that little of any consequence was decided. In fact the final communiqué looks remarkably similar to the one leaked by Der Spiegel the other day strongly suggests that the G20 summit was about as uneventful as - well, your average G8 summit.

In particular, the argument over regulation hasn't been settled either way. The summit has left sufficient room for wiggle and fudge that Spiegel can claim that Angela Merket and Nicolas Sarkozy "appeared to be getting everything they asked for" while, in the Telegraph, Iain Martin can write that "mercifully the French did not get what they want". A typical diplomatic pudding, then: as Martin also says, "pretty much a giant public relations con".

So what was it all about?

Janet Daley in the Telegraph is pleased to note that "there will be no World Government today, thank heavens" and that the summit "failed to produce was the supra-national economic police force with fearsome punitive powers which Mr Sarkozy seemed to be demanding as the price of his cooperation".

There was talk about "naming and shaming" of states that would not cooperate on international financial regulation. There were some vague references to unspecified "sanctions" for countries that broke the (as yet unspecified) rules - but the substantive power to regulate was left in the hands of individual governments. And that, so long as we remain at all serious about democratic accountability, is where it belongs

Will Hutton, on the other hand, hailed the "extraordinary series of commitments from G20 leaders". He also thinks that "get rich quick capitalism" is now out:

For more than 30 years in economic journalism I have written about many summits. Their job has been to rubber stump the Washington consensus, and offer an illusory picture of collective action and grip – when the truth has been "market states" running up the white flag before the ever advancing battalions of global finance. This summit is decisively different – the most substantive of its type since 1944. It offers a break with the Washington consensus, free market ideology and financial turbo capitalism – and is assembling the world around a new order and set of ideas.

Surely they can't both be right?

The world economy long ago grew beyond the capacity of governments, even of international institutions, to control it. The current crisis may well prove some kind of turning-point - and the prominence at the G20 - at least in the group photo - of "emerging" economies is a powerful symbol of that change. But this summit was basically just a summit.
Email Post
Labels: economy Gordon Brown Politics

Letters From A Tory said…
If Nick Robinson's title for Gordon Brown means that we can blame him for everything that goes wrong around the world, I'm all for it.
3 April 2009 at 10:00