Counterfeits and the meaning of money

It's reported that up to one in twenty pound coins currently in circulation is a fake. According to the Telegraph:

Andy Brown, managing director at Willings, a company which tests coins collected at car parks and in vending machines, said the machines used by the Royal Mint to test for fakes were not accurate enough.

He believes the figure could be as high as 5 per cent, amounting to around 73 million coins. The Mint, by contrast, estimated last year that there were between 30 and 40 million counterfeit pound coins in circulation. Brown believes the discrepancy arises because their apparatus "can only find 30 per cent to 40 per cent of the fakes".

Whatever the actual figure, there are plainly a lot of fakes out there - and many of them are going undetected. Apparently it's a growing problem. In 2003 the Royal Mint estimated that "almost one percent" of coins were forgeries - and even that figure had increased substantially since the mid 1990s. 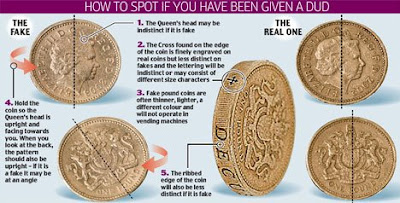 Some counterfeit coins are fairly easy to spot, if you look closely - but who scrutinises their change for tell-tale signs such as a badly-struck motto or a mismatch in the alignment of the obverse and reverse sides? Many are rejected by vending machines. But others are less obvious. Large numbers, it would appear, pass undetected through the banking system. The Telegraph report quoted Brown as saying: "We carried out our own sample and withdrew £2,000 in pound coins from the bank and we found 3 per cent to 4 per cent were fakes."

All this raises some interesting questions.

Unlike a banknote, which these days incorporates various clever anti-fraud devices, there is no reliable way of telling a counterfeit coin from a genuine one. It follows that only bad fakes are likely to be spotted. A truly accurate counterfeit, being virtually indistinguishable from the real thing, will, once it has been introduced into circulation, function in precisely the same way as a real one. Indeed, even the lower figure of £30 million implies that almost everyone, at some time, handles counterfeit coins - receives them in change, uses them to pay for small items. And Brown is claiming that a coin might be "counterfeit" even if it accepted as genuine by the Royal Mint!

It is only at the point that a coin is found out to be a fake that any loss occurs - and the loss to the person holding the final fake is caused, not by the counterfeiter, but by the refusal of the system to recognise what previously had been used without problem.

What, then, determines its counterfeit status? Not the material it is made of, since the forger may have access to a very similar alloy. From the point of view of intrinsic value, indeed, there will usually be little or no difference between the real and the counterfeit. All modern coins (except, in the British coinage, copper pennies and twopennies minted before 1992) are in one sense counterfeit, pretending to a value they do not possess. Unlike the gold and silver coinage of the past, minted from bullion, modern coins are mere tokens. They gain their value from their social acceptance as money, which is theoretically backed by the state. But that, too, is purely notional, since the quantity of cash in circulation far exceeds the meagre gold deposits kept in the Bank of England. So a fake coin is not like a fake Rolex or a fake Picasso. It is closer to an illegal download or an unlicensed performance of a play.

Counterfeit coins are typically produced by criminal gangs who, if they succeed in passing off their fakes, have profited at the expense of the money supply. Theoretically, their crime might be supposed to have an inflationary effect; but these days few large transactions are carried out using physical banknotes, still less using coins, so any economic effect from counterfeited currency will be negligible. Certainly far less than the effect of the counterfeiting operation currently being carried on by the Treasury through its policy of "quantitative easing". So who is the victim? Effectively, it's the poor sap who finds himself holding the dud. It may be asked, though, whether this unfortunate is a victim of the counterfeiter, who has long since disappeared. Is he not rather being deprived by the counterfeit-detector, whether it be a representative of officialdom or, like Mr Brown, a private operator?

Coins passing through banks - handed out by banks to their customers, like the ones Mr Brown discovered in his sample - have ceased to be part of any criminal operation. The forgers have already made their profit, and have escaped detection - at least so far as these coins are concerned. To all intents and purposes, the forged coins have become money - in that they have been accepted as a medium of exchange. They are counterfeit to begin with, and they are counterfeit once they are detected, but while they are in circulation they're no different to any other coins. Their fraudulence is in abeyance. Philosophically, then, it is hard to see how counterfeit money in circulation is not money. By declaring a coin to be fake, the fake-detector changes its status.

It might even be doubted whether it is in the interest of the authorities to clamp down too hard on the hard-to-spot fakes - which, if Mr Brown is correct, amount to more than half the counterfeit pound coins currently in circulation. For money, which exists only in the minds of people using it, is like any conjuring trick dependent upon a suspension of disbelief. Too much public awareness of the prevalence of forgery and people may cease to trust their coinage, fearing that any coin they handle might be a fake, rendered suddenly valueless through no fault of their own. Rigorous checking of every coin would have the greatest impact on the innocent - which is almost everyone. And, since no compensation is offered to people who hand in counterfeit coins, there would be considerable public anger.

In a short story - more of a comment, really - Baudelaire imagined what would happen were some "generous" person to give a large denomination, but counterfeit, coin to a beggar:

Might it not be converted into real coins? Might it not also lead him into prison? A publican or a baker might, for example, have him arrested as a counterfeiter or as a passer of counterfeit coins. But the counterfeit coin might also just as well serve as the seed for several day’s wealth, in the hands of a poor, small-scale speculator. And so my fancy played itself out, lending wings to the spirit of my friend and drawing all possible deductions from all possible hypotheses.

The fraudster, by putting a counterfeit coin into circulation, has created something out of nothing. He has performed an act of magic. But then so has a government printing extra money, or a banker issuing debt on the back of opaque products of financial engineering. The difference is merely one of degree - and in terms of the damage done when or if the fraud is found out for what it is.
Email Post
Labels: culture economy law

John B said…
I realise this isn't the main point of the post, but I'd be careful about believing PR 'survey' figures from a company that massively benefits from increasing the public's fear of counterfeit coins...
9 April 2009 at 10:04