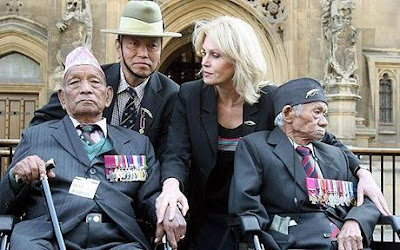 The BBC describes as a "surprise" the government's Commons defeat over the rules it intended to impose on Gurkha veterans wanting to settle in Britain. It didn't surprise me. The proposals - brought in after the High Court ruled the previous policy illegal - were cynically designed to be as exclusionary as possible. The right to settle was offered to soldiers who had served for twenty years, although the standard enlistment period is fifteen, for example.

Whether or not the government expected to lose, it's hard to see what they thought they were doing. The Gurkhas, with their near legendary status in the British army, proud history and romantic origins in the Nepalese highlands, have always been able to count on a vast reservoir of public goodwill. Once the campaign began to grant them equal rights with Commonwealth soldiers - fronted by the ever-popular Joanna Lumley - it was bound to attract widespread sympathy. Whatever points of cost or historic practice might be raised by the Home Office to keep them out were always bound to strike the average person - even allowing for the average person's general attitude towards immigration - as mean-spirited, ungrateful and cheap. I can think of few other foreign nationals wishing to settle in this country who would attract such wholehearted support from the Telegraph and the Daily Mail.

The Gurkhas, in short, are a Special Case, not just morally - they fight our wars, after all - but also politically. A wise politician knows how to choose an enemy. Margaret Thatcher had Galtieri and Scargill. Tony Blair had Slobodan Milosovic, Saddam Hussein (and Gordon Brown). Brown, meanwhile, goes into battle against a relatively small number of old soldiers who will always be far more popular than he is. He even justified the policy this lunchtime in the House of Commons, when it was clear that both Opposition parties and a fair number of his own MPs were supporting the Gurkhas. Is this not utterly insane? After his giggling YouTube performance, followed a few days later by an even more embarrassing U-turn, it certainly appeared that he had completely lost the plot. This latest fiasco proves it.
Email Post
Labels: Gordon Brown Politics

WoollyMindedLiberal said…
His political antenna does appear to be on the blink to put it mildly and I suppose this is what happens to those who think that a 'Moral Compass' is the last word in navigational devices.
29 April 2009 at 18:18

This is a victory for the Gurkhas and for natural justice. Nick Clegg has done a great job highlighting this issue and Brown is consistently now showing how tone deaf he is.

septicisle said…
It's seemed to me from the beginning that the government has decided that there is no difference between immigrants and asylum seekers; they're either all to be welcomed or all to be told to go forth. The current tendency seems to be that they should be all told to go forth, regardless of who they are, and then they're surprised when suddenly both the tabloids and the BNP decide that they'd actually not mind these particular immigrants settling down here.
29 April 2009 at 20:07

Martin said…
For a man who is supposed to lay elephant traps as a prime means of political conduct, you might have thought he could recognise one when he saw it

Blair would have got away with it somehow, so in a back-handed way I suppose that makes Brown better.

If you want a Manichaen image of the clash between light and dark, Joanna Lumley speaking on behalf of the Gurkhas versus Satan's Son of the Manse does it for me.
30 April 2009 at 09:06

John B said…
Not quite sure why 'being a mercenary who signed up in the full knowledge they'd get a giant sack of money and no British passport' ought to put one to the top of the 'British passport' queue - but even so, given that the wider public disagrees Brown's decision was about as politically witless as it gets.
30 April 2009 at 13:38

Heresiarch said…
A giant sack of money? For decades, one of the justifications for keeping the Brigade of Gurkhas, to many in the MoD, is that they were cheaper than British-born troops. (Plus they complained less and didn't get drunk.) Of course, the money is good by Nepalese standards, but the Gurkhas are more than worth every penny. Would you risk your life for what soldiers get paid? No? Sod off then.
30 April 2009 at 14:07

John B said…
Would I risk my life fighting for (say) the US for what the Gurkhas get paid? No.

Heresiarch said…
John B: I fear I didn't word that very well. I don't see it as in any sense equitable that people doing the same job should be treated differently because of where they're from. Nor do I see why being a "mercenary" necessarily makes you any less worthy, or brave, or moral than someone fighting "for their country". How much do you actually know about Nepalese ex-Gurkhas and their "millionaire lifestyle" anyway? If it were that great, why would any of them want to swap it for an old folks home in Britain?
1 May 2009 at 16:45

Lord T said…
Gordo has not lost the plot as everyone likes to say.

i) Gurkhas do get drunk. Very very drunk. Their favourite tipple is a type of rum made in India. They tend to chew tobacco rather than smoke it though.

ii) It doesn't matter how well paid a Gurkha is. If the government is finally getting the message that annual immigration needs to be finite, I'd rather have people who've been risking their lives for us (yes, even for money), learning to speak English and saluting the Queen,
than some bearded madman who only came here to abuse our benefits system and complain about our way of life, any day of the week.

Anonymous said…
Did anyone else feel utter nausea when Gordon ttried to justify telling these guys to piss off, cos it might be 100,000 extra people and a billion quid...

when Gordon & co have welcomed the Somalis who are terrorising the indian community to such an extent in Southall that the local Labout MP spoke out and named them (in 2004!), and that a gang fight recently lead to a killing in the A&E at Ealing Hospital that closed it for six hours?
4 May 2009 at 02:38