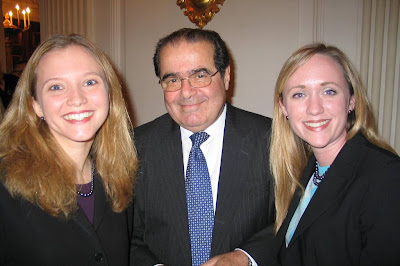 US Supreme Court Justice Antonin Scalia, the bench's most uncompromising conservative, looks uncomfortably like Tony Soprano. But as a case decided on Tuesday (pdf full judgement) made plain, he doesn't share the mobster's taste for four-letter words. At least on TV. Upholding the right of regulators to introduce a strict liability policy ("one 'shit' and you're out?) for TV companies, he asserted that "the pervasiveness of foul language, and the coarsening of public entertainment in other media such as cable, justify more stringent regulation of broadcast programs so as to give conscientious parents a relatively safe haven for their children".

The case involved a change of policy by the US equivalent of Ofcom, the FCC. Previously, they had allowed unintentional and fleeting use of swearwords (before a 10pm watershed) - as when some celebrity let slip an involuntary ejaculation of frustration or delight, and the show's going out live so it can't be bleeped. But repeated and deliberate use of such language might be expected to result in a fine. The policy went back to the Pacifica Radio case of 1973, where the Supreme Court - split, as in this latest instance, 5-4 - voted to uphold the FCC's fine for a broadcast of the late George Carlin's comic monologue, Seven Words You Can Never Say On Television. On that occasion, the court made a clear distinction between repeated and isolated use of language. They also made a distinction between "expletive" use of a word (sometimes OK) and "descriptive" use, which they considered a more serious matter. Thus "fuck" might be acceptable as a swearword, but not as a reference to sexual activity.

That was more than thirty years ago. Since then, as Scalia noted in his judgement, the FCC has taken a "gradually expanding" approach to enforcement, moving towards stricter and more prescriptive standards. The watershed, though, came when Bono collected an award at the Golden Globes in 2003, describing the accolade as "fucking amazing" (or "f***ing amazing" as Scalia renders it). The FCC were minded to let it pass, but such was the outcry from certain clean-speech campaigners and politicians that they revised their guidelines. It was this revised formula - as applied to the two shows in particular - that Fox were challenging here. Scalito was in his element.

Scalia summarised the offensive comments, and their context:

The first occurred during the 2002 Billboard Music Awards, when the singer Cher exclaimed, “I’ve also had critics for thelast 40 years saying that I was on my way out every year. Right. So f*** ‘em.” The second involved a segment of the 2003 Billboard Music Awards, during the presentation of an award by Nicole Richie and Paris Hilton, principals in a Fox television series called“The Simple Life.” Ms. Hilton began their interchange by reminding Ms. Richie to “watch the bad language,” but Ms. Richie proceeded to ask the audience, “Why do they even call it ‘The Simple Life?’ Have you ever tried to get cow s*** out of a Prada purse? It’s not so f***ing simple.”

Following each of these broadcasts, the Commission received numerous complaints from parents whose children were exposed to the language.

Scalia accepted that it was "conceivable that the Commission’s orders may cause some broadcasters to avoid certain language that is beyond the Commission’s reach under the Constitution". But that didn't seem to bother him unduly. Along with four other judges, he thought that it was perfectly reasonable for the FCC to change its policy without giving a convincing explanation. At the same time, he clearly found the commission's reasons for the change convincing. Here are some of the points that he endorsed:


That last quote raises an interesting question. It relates, of course, to the FCC's central claim that swearwords based on sexual or scatological terms necessarily allude to those activites. But as the veteran John Paul Stevens (who was there in 1978, when Pacifica was heard, and so was able - unsuccessfully - to correct Scalia's misunderstanding of the case) put it in his dissenting opinion:

The customs of speech refute this claim: There is a critical distinction between the use of an expletive to describe a sexual or excretory function and the use of such a word for an entirely different purpose, such as toexpress an emotion. One rests at the core of indecency; the other stands miles apart. As any golfer who haswatched his partner shank a short approach knows, it would be absurd to accept the suggestion that the resultant four-letter word uttered on the golf course describes sex or excrement and is therefore indecent. But that is the absurdity the FCC has embraced in its new approach to indecency.

Stevens J laments the illogicality of the focus on particular words. He finds it ironic that "while the FCC patrols the airwaves for words that have a tenuous relationship with sex or excrement, commercials broadcast during prime time frequently ask viewers whether they are battling erectile dysfunction or having trouble going to the bathroom." But in this, strange to say, it may be Scalia who has the greater insight. Stevens should pay attention to the cognitive scientist Steven Pinker, whose recent bestseller The Stuff of Thought devotes a comprehensive chapter to the subject. Which partly explains why the book became a bestseller.

Pinker points to the strange but undeniable fact that "for most of the past century the most famous legal battles over free speech have been joined not where history would lead us to expect them - in efforts to speak truth to power - but in the use of certain words for copulation, pudenda, orifices and effluvia." He further notes that:

To these guardians of decency, profanity is self-evidently corrupting, especially to the young. This argument is made in spite of the fact that everyone is familiar with these words, including most children, and that no-one has ever spelled out how the mere hearing of a word could corrupt one's morals.

Nothing if not thorough, Pinker enumerates no fewer than five modes of swearing: descriptive, abusive, emphatic, idiomatic and cathartic. Of these, only the "descriptive" sense is literal; indeed, in other circumstances the meaning of the taboo word is of less significance than the fact that it is taboo. "They substitute for one another in idioms even when they have no affinity in syntax or meaning". (For example, the apparently nonsensical "for fuck's sake" is a variation of "for God's sake"). Yet it is the literal meaning that gives them their peculiar force. They are uniquely charged, so that a speaker or writer "can use a taboo word to evoke an emotional response in an audience quite against their wishes". As such, swearwords belong to the category of "word magic".

He also draws on neurological studies which indicate that "taboo words", whether their reference are sexual, sacrilegious or scatological, can by-pass the normal speech centres of the brain, impacting directly on the emotions. Swearing "taps the deeper and older parts of the brain." It is this visceral quality, it occurs to me, that distinguishes "true" swear words, the sex-, excretion- (and, to some extent, religion-) based vocabulary, from that modern class of taboo words which are equally if not more socially unacceptable. Hit your thumb with a hammer and you may expostulate "fuck", "shit" or "Christ" more-or-less interchangeably. But no-one, in such circumstances, cries out "nigger" or "spastic". Or, indeed, "homo".

While poking fun at the absurdities of some anti-profanity campaigners, Pinker is not without some sympathy for their concerns. He notes, for example, that the aura of taboo, mystique and even fear that traditionally surrounds sex (and, by extension, words for sex) may benefit wider society. "Sex has high stakes", he writes. "Plain speaking about sex conveys an attitude that sex is a casual matter". The wider acceptability of sex-based swearwords in the past few decades has accompanied greater laxity in sexual mores - which, he argues, might not be an unmixed blessing. More generally,

Language has often been called a weapon, and people should be mindful about where to aim it and when to fire. The common denominator of taboo words is the act of forcing a disagreeable thought on someone, and it's worth considering how often one really wants one's audience to be reminded of excrement, urine and exploitative sex. Even in its mildest form...the lazy use of profanity can feel like a series of jabs in the ribs.

The US attitude to swearing on network TV, like the US attitude to nudity on television, often seems maiden-auntish even by British standards. But, as the split decision suggests, the debate is really a subset of the broader "culture wars", which encompass such matters as the teaching of creationism in schools, abortion, capital punishment, gun control and the treatment of prisoners in Guantanamo Bay. Scalia, who was once described by George W Bush as his ideal judge, invariably finds himself on one side in these decisions, Stevens on the other. There is, notoriously, a demographic and geographical factors at work in these debates: the difference between "red" and "blue" states, between the "heartland" and the coasts, large towns and small. Another dissenting judge, Justice Stephen Breyer, suggested that the stricter policy would impact most strongly on small broadcasters who might be unable to afford the latest bleeping equipment, and that this in turn could harm local communities, even democracy itself. This drew a hilarious rebuke from Scalia:

We doubt, to begin with, that small-town broadcasters run a heightened risk of liability for indecent utterances. In programming that they originate, their down-home local guests probably employ vulgarity less than big-city folks; and small-town stations generally cannot afford or cannot attract foul-mouthed glitteratae from Hollywood.

I love that glitteratae. Scalia has taken the (fake) Latin noun glitteratus and declined it in the feminine plural, just so as to stick the knife into Nicole and Cher (implicitly exempting Bono along the way). Whatever you think of the man's politics, that shows class.

If you've read through this far, you deserve a reward. So here is the late George Carlin with the routine that started it all: The Seven Words. Needless to say, it contains "strong language".