A festive tale tonight, ladies and gentlemen, although the themes we shall be exploring would be familiar at any time of the year. 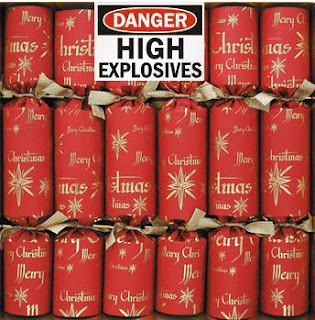 Yesterday in Parliament Michael Ellis MP stood up and complained about the "absurd health and safety legislation, which has reached such dizzy heights in this country that the chief executive of Sainsbury's told me last week that Christmas crackers are now category 1 fireworks, and cannot be sold to anyone under the age of 16." He invited the Prime Minister to "put a firework up the Health and Safety Executive" - something which David Cameron would said would give him "enormous pleasure". Indeed, he was looking forward to it. The PM didn't quite commit himself to putting this particular provision on the bonfire of regulatory inanities that the coalition is always promising but never quite manages to assemble. But he was happy to give the impression that classifying crackers as fireworks, and banning children from buying them, was self-evidently silly.

Most people would no doubt agree. I certainly would. I can remember, as a small and inquisitive boy, tugging carefully at the ends of Christmas crackers, extracting the explosive bit and seeing what happened if I let it off next to my skin. It never did me any harm. It wouldn't have done me any more harm if I'd bought the things myself. But the law and commonsense are not always perfectly aligned, and the latest Pyrotechnic Safety Regulations - promulgated earlier this year - do indeed ban the sale of crackers and other "indoor fireworks" to anyone under the age of sixteen. On the other hand, Ellis was wrong to blame the Health and Safety Executive. The HSE didn't write the regulations, and has no role in enforcing them. From what I can tell, the HSE spends most of its time these days trying to discourage the over-implementation of regulations and directives rather than thinking up new types of barminess.

I'm not sure if Ellis was acting on his own initiative, but his question coincided with a press release from the British Retail Consortium also lamenting the crackpot crackers ban and warning that "trading standards officers will now be monitoring how retailers enforce the law." The statement went on to urge customers to show "understanding" as stores (taking no chances) applied the full rigour of the Challenge 25 policy to demand photo ID from anyone under pensionable age who might want to buy a box of crackers. At the same time, the BRC called for "a sensible attitude to enforcement" - presumably that is aimed at trading standards officers, rather than the shops who will, customers are assured, be enforcing it rigorously - and for the rules to be urgently reconsidered, pointing out that the EU directive which the new regulations are supposed to implement had "a more sensible age limit of 12." The directive "should never have been gold-plated to become 16 in the UK" BRC spokeswoman Jane Bevis is quoted as saying. It is a "ludicrous restriction" that had "slipped through the net" despite government promises to rein in "health and safety" madness.

The Express, meanwhile, had a story about a six year old girl distressed by a cashier's refusal to let her hand over a box of crackers from her mother's shopping trolley. The cashier apparently believed that by taking the box from the child's outstretched arms she would would be breaking the rules and would end up going to prison for six months. Or something.

You'd be forgiven, then, for thinking that this is a new story. But like most cracker jokes it's actually an old one. Two years ago, the Sun brought us the tale of twenty-two year old Heather Welsh from York, unable to buy crackers in her local M&S because she couldn't produce any ID. A local newspaper elaborated. The store, it reported, had signs put up everywhere referencing the Fireworks Safety Regulations 1997 and even the Victorian Explosives Act of 1875 in support of the ban. A York trading standards officer, meanwhile, quoted the regulations of 2004 to the same effect. The problem, apparently, was that christmas crackers contain gunpowder. This led into a tangential story about a cracker exporter who complained that "Some carriers refuse to transport crackers – because they are ‘too dangerous’. Airlines won’t touch them. I have to send them by road." He blamed that other usual suspect (along with the EU and the HSE) in such stories - the increasingly pervasive fear of being sued.

Go back a further two years to 2006 and the Sun, again, had a story about 18 year old Hannah Thomas being turned away from WH Smith in Weymouth. I won't bore you with the details, except to note the Smiths spokesman who defended the policy as "responsible retailing" because of all that dangerous gunpowder. It's one thing to stoically implement a daft law because one must obey the law to the letter (and this country has never lacked an heroic cadre of petty officials who take special delight - or see especial virtue - in enforcing the most pettifogging of regulations.) It's quite another, I think, to convince yourself that such a rule might actually be sensible.

So how old is the rule banning 16 year olds from buying Christmas crackers? It first appeared, I find, in the Explosives (Age of Purchase etc.) Act 1976 - which didn't explicitly categorise Christmas crackers as indoor fireworks but rather related to all products containing gunpowder, as did the 1875 Act that it updated. In 1875 the age for buying gunpowder had been set at thirteen. That the age limit did apply was made explicit in the 1997 Fireworks (Safety) Regulations, which raised the age for buying most fireworks to 18 but exempted "any cap, cracker snap, novelty match, party popper, serpent or throwdown." The accompanying guidance (pdf) specified that these items "remain subject to the prohibition on sale to persons under the age of 16".

What do I conclude from all this? A number of things.

First, like Christmas itself, the crackers crackers ban comes round almost every year; and each time it is presented as something new and unexpected, to be blamed afresh on Elf n' Safety, Brussels or whoever happens to be in power.

Second, pace the BRC the 2010 regulations are not a case of British officials taking the opportunity sneakily to gold-plate an EU directive. Civil servants merely re-issued the old regulations with a few changes in wording to take account of the new directive. The most that can be said is that they failed to take the opportunity to make the existing regulations more sensible. This is more likely due to inertia than any deep belief in the necessity for an age-limit of 16. But it also shows that our government doesn't merely rubber-stamp EU directives - rather, where possible, it combines them with existing British rules. And that this practice often results in more stringent rules than would otherwise have been the case.

Third, although the rule is an old one it is probable that it is now being more strictly enforced. But then many things - and especially age limits - are much more strictly enforced these days than they once were. It may be that until relatively recently few retailers or local authorities knew or cared that Christmas crackers were covered by the Explosives Act; or if they did regarded it as legal curiosity rather than as something that that should literally be implemented. I haven't been able to track down any cracker-ban stories earlier than the middle of the last decade. The cracker-ban, then, is a symptom of an increasingly rigid, conformist, rule-obsessed society in which initiative and common sense are both objects of suspicion. A culture in which officials treat christmas crackers as fireworks is also one in which a light-hearted Tweet about blowing an airport "sky-high" is categorised as a security threat.

Finally, the age limit itself. It's striking that the Victorians were quite happy for thirteen year old to buy and handle quite considerable quantities of gunpowder (the Explosives Act only covered "indoor fireworks" by implication). But then that era of imagined childhood innocence also allowed children of that age to work, while the age of consent - inasmuch as it existed - was twelve. David Cameron used to accuse the previous government of "treating children like adults and adults like children", but only the second of these was actually true. I've lost count of the number of things I was able to do as a child that are now illegal, from taking a penknife into school to buying a goldfish. We even used to be allowed to buy glue. And if it was technically illegal to purchase Christmas crackers, no-one seems to have been aware of the fact. I'm not that ancient.

Are children more irresponsible than they used to be? They are certainly more protected, from themselves as much as from others; and of course forty years ago most sixteen year olds would have been in work (thirty years ago they would have been unemployed). Yet the prevailing narrative about childhood is that it is under threat - that under the pressure of commercialisation and a pervasively "sexualising" media children are being forced to "grow up to soon", to look and act like mini-adults. The response - more protection, more legislations, more restrictions on what they can and cannot do. The age of puberty may have dropped, but the age of responsibility just keeps on getting higher. And the same press that points out the absurdity of the cracker sales ban has fuelled a moral panic about teenage drinking even as the number of teenagers who consume alcohol has steadily fallen. Because, after all, youngsters really can't be trusted. Better keep them away from those crackers, just in case.