Elven Safety not a priority in Denmark 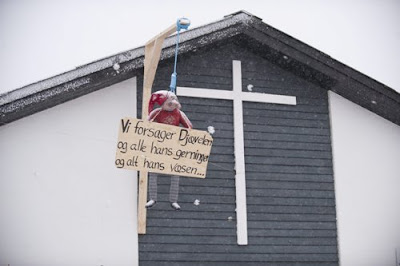 According to George Carey and co, our traditional Christmas is under threat from an unholy alliance of mililtant secularists and politically-correct multicultural commissars. This story from Denmark, however, suggests a more surprising source of anti-festive humbuggery. The Rev Jon Knudsen, the pastor of the Løkken Free Church in the Jutland town of Vendsyssel, has identified elves - in particular, the Santa-hatted Christmassy evles that decorate shops and homes everywhere at this time of year - as dangerous demonic threats.

Knudsen said that using elves as Christmas decorations was “comparable to decorating with Nazi flags”, and described elves of all sorts as “poltergeists that come from the devil and make children sick”. To make his point, he hanged an elf from his church roof with a sign round its neck reading “we reject Satan and all his works and all his empty promises”.

Not everyone was happy with the stunt. Some local residents demanded the elven gallows be removed. And a dozen gnomes came out in sympathy to protest outside the pastor's home. Knudsen was also deluged with letters from outraged members of Denmark's elf community. Fearing trouble, he posted a guard outside the church. But to no avail: on Monday afternoon while no one was watching someone rescued. The culprit left a message that the elf was being “kept safe until after the New Year”; although he confessed, police declined to press charges, saying they had more important things to deal with.