Qatar's FIFA success proves we are winning the war on terror 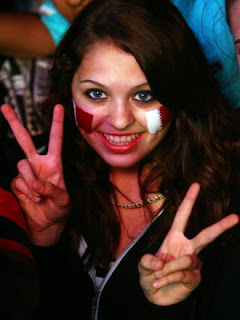 The award of the 2022 World Cup to tiny, gas-drenched Qatar has been greeted with an odd mixture of bemusement and outrage. Attention quickly focused on the inappropriateness of the choice. Qatar - the consensus seems to be - is too small, too hot, too undemocratic and too Muslim to play host to the quadrennial secular Haj (for it is written, is it not, that any true football fan must at some point in his life make the pilgrimmage to watch his country lose to Brazil or, in our case, Germany?) And of course they bought it. It's the only explanation. The only thing no-one is suggesting is that Qatar cannot afford to host the championship. So it lacks the infrastructure and the stadiums? No problem. They will just build some. It's small change, really.

Though it is discussed sotto voce, the Muslim dimension is the most troubling to many doubters. The idea seems to be that male supporters will be unable to drink themselves silly and that female supporters (if they are even let in) will be forced to walk around in burqas. And what is the point of a World Cup, we're meant to think, without booze and half-naked women? There's the football, of course. But the World Cup is about more than just twenty-two men kicking a ball around. It's the great global party, a collective carnival, the time when even those who normally can't stand football develop a temporary interest. What the Olympics were to ancient Greece the FIFA World Cup is to our global civilisation (apart from the Americans, of course, which is odd but also strangely telling). The modern Olympics, by contrast, are a yawn, an expensive waste of time. That's why, unlike the World Cup, the Olympic Games almost invariably lose money.

So: a Muslim country wants to get in on the act, wants to subsidise the decadent West's most decadent festival, will allegedly even pay bribes to get it. And people are outraged? We should be delighted. It shows, apart from anything else, that we are winning the global kulturkampf hands down. It is yet another indication of the strength, the universal attractiveness, of Western culture. And it will be a major triumph in the ongoing war against terror.

Qatar may not be a model democracy, and may have the usual anti-gay legislation, but compared with most of its neighbours it's a haven of liberalism. The woman in the picture was celebrating yesterday's news in Doha. Not exactly Saudi Arabia, then. Qatar's ruler is less corrupt, less beholden to fundamentalists, is more pro-Western and has a more visible wife than is normal for the region. Since he's sitting on the world's most substantial gas-lake, that's a cause for celebration in itself. But there's more. By hosting the World Cup, at vast cost, the Qataris are giving not just football but global secular culture the greatest possible plug. They are encouraging not just their own people, but all the inhabitants of that tumultuous region - Iraqis, Iranians, Saudis, Syrians - to plough their restless energy into a harmless game. And away from terrorism, fundamentalism and dreams of global jihad.

Football, to its fans, is a religion, or more than a religion. International sporting competition is also what civilised nations do instead of war. At one level, it was absurd to watch our prime minister and our future king abasing themselves before the decrepit and corrupt oligarchs who run FIFA. But at another, it was hugely reassuring. For they rightly recognised the galvanizing effect that hosting the World Cup would have had in England, just as it had in South Africa, just as it will have in Qater. But in truth, England doesn't need the World Cup. We have the Premiership and the Champions League for nine months every year. Some would say we have too much football as it is, and a World Cup would just be overkill. In the Middle East, on the other hand, soccer must compete with radical Islamism for the attentions of the young.

Football and the Jihad have a surprising amount in common, after all. Both have their pin-ups, their romantic warrior-heroes, their narrative of victimhood (the whole Israel-Palestine question boils down to little more than a prodigious case of "We woz robbed"), their irrational closed-minded team-loyalties, their hooliganism. Both are powerful vehicles for male bonding. The more football there is, then, the less terrorism there is likely to be.

The Qataris have done us all a huge favour. The emirate's most famous resident, Ken Livingstone's old mate Dr Yusuf al-Qaradawi, may be crowing that the decision marks the Muslim world's victory over the United States, but it really marks football's victory over theology, something he won't like one bit.
Email Post
Labels: Islamism middle east religion sport terrorism