A spanking model reads That Book 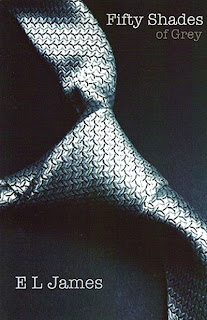 Last summer I went to see Sir Patrick Stewart in The Merchant of Venice. He played Shylock, a member of a minority subculture, in a work created by a writer from outside that subculture. The director performed feats of inventiveness to turn a play full of wounding stereotypes into a spectacular, memorable production. The play’s contemporaries would have had to make no such efforts: there weren’t many Jews in Shakespeare’s target audience.

Of course there's no real comparison between EL James and Shakespeare. Merchant is a work of genius. Fifty Shades of Grey is a black hole of literary merit: shelved next to other books, it sucks the quality out of them. That it’s a bad book is indisputable, but that in itself doesn’t matter. Many books are bad; to save on blood pressure medication, we literary snobs are well advised to ignore them.

Whenever I prepare to see a production of The Merchant of Venice, I brace for Shylock. While these days a production that isn’t culturally sensitive is unlikely to make it onto the stage, the play is what it is, the characters are who they are. Shakespeare’s genius notwithstanding, Shylock is a stereotype of a Jew, and, as far as much of Western culture was concerned, he was the only type of Jew that had ever existed.

While race isn’t the same as sexuality, kinky people brace for every mainstream portrayal of our subculture in a very similar way. We know what to expect, from heroes and villains alike: if a character is into BDSM, there’s usually either a flashback to childhood beatings (Exit to Eden), or allusions to a present-day mental illness (Secretary). And these are just the romantic comedies. As we travel across genres through drama (The Piano Teacher?) and romance to thriller , there are precious few examples of kinky characters who haven’t been served up from the same cauldron of lukewarm stereotypes. What a miserable, guilt-ridden, destructive lot we are.

- It’s acceptable to physically punish somebody even if they haven’t consented, as long as you’ve warned them in advance that you don’t like certain behaviours. (No, it’s still assault.)

- It’s acceptable for the submissive's limbs to become numb while in restraints. (It isn’t. If they are, the restraints are too tight.)

- “Lovers don’t need safewords” (There are circumstances under which people choose to suspend the use of safewords. True love is not what makes this safe. In addition, there are two universal safewords: “vomit” and “lawsuit”.)

- Dominants are strong, and are older. Submissives are weak, and are younger. (Spare me.)

- Switches, that is, people who enjoy both roles, don’t exist. (A position with which bisexuals may find it easy to sympathise.)

Still worse, Grey’s lifestyle is used to justify behaviour that’s possessive, stalkerish and emotionally abusive. He berates Ana (who isn’t even his girlfriend at this stage) for arranging a trip to see her mother, he billows puffs of drama whenever she talks to another man, and his jealousy of her boss is so profound that he arranges to buy the company she works for. (I realised that this was what must be happening with the NHS privatisation: perhaps Ana wanted to be a surgeon, and Grey had to buy it.) He throws his toys out of the pram when, newly married, she chooses to keep her name at work - and this is in the third book of the trilogy, in the midst of their “happily ever after”. Yet, it is not this bad behaviour that gets shaken out of him by the force of Ana’s love and innocence, but his perfectly mundane spanking fetish.

At the end of The Merchant of Venice, Shylock converts to Christianity. For an Elizabethan audience, this was a happy ending, for now he could earn his way to heaven. This is not how Jewish people would see it. As Patrick Stewart took off the trappings of Judaic religious dress, and said the words bullied out of him by the victorious heroes, nobody could have been left under any illusion that what happened to his character was anything but spiritual rape.

I’m sure we’re all looking to a faithful film adaptation.