For Mitt Romney, as for Churchill, England is a small island 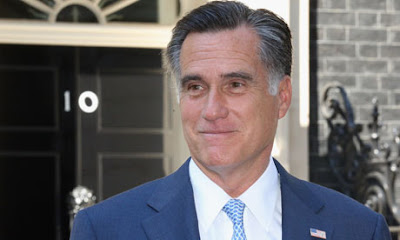 We must hope that Mitt Romney does not win the US presidency in November, because however positive his words about our shared "Anglo-Saxon heritage" (by which I'm sure he meant Magna Carta, the common law and Shakespeare rather than anything genetic) he's unlikely to forget the derision to which he has been subjected by much of the British press during his trip here. A series of gaffes, wittily and inevitably dubbed "Romneyshambles", have been gleefully seized upon by an establishment still locked into an unrequited love affair with the Obamas.

Not only did Mr Romney cast aspersions on the UK's preparedness for the Olympics in a TV interview before he left his native shores (but wherever might he have got the impression that there were any organisational problems, other than the British media?) Not only did he "insult" Ed Miliband by seeming to forget his name (but perhaps not: perhaps he believed that Mr Leader was the correct way to formally address a leader of Her Majesty's Opposition). It now turns out that in a book written two years ago he denigrated the entire British nation.

This is the full quote from that book, which has the charmingly inappropriate title No Apology, as unearthed by Foreign Policy:

England is just a small island. Its roads and houses are small. With few exceptions, it doesn't make things that people in the rest of the world want to buy. And if it hadn't been separated from the continent by water, it almost certainly would have been lost to Hitler's ambitions. Yet only two lifetimes ago, Britain ruled the largest and wealthiest empire in the history of humankind. Britain controlled a quarter of the earth's land and a quarter of the earth's population.

The first sentence is of course technically inaccurate. England is not an island, but part of an island; and the island of Great Britain is not small. Sark is a small island. Great Britain is the ninth or tenth largest island in the world, depending on whether or not one counts Australia as an island. But all this misses the point. In referring to England, Romney is not merely following an American convention (no more or less inaccurate than the convention of using "America" to mean the United States rather than to the two continents of North and South America). He is also speaking as Churchill almost invariably did, as Disraeli did, as the Irish-born Duke of Wellington did. Or as David Starkey still does today. The synecdoche that makes England stand for the entire United Kingdom might annoy Scots and Welsh (or even encourage nationalism) but it is correct in terms of history, politics and language. The United Kingdom has always been England with a few other bits tacked on.

And yes, Great Britain is not a small island. But it is - and this was surely Romney's point - a small country, geographically confined and modest in terms of population, overcrowded as the southern part of it may be. It is a country, moreover, whose people have often in their history - when it faced the Armada in 1588, when it confronted Nazi Germany in 1940 - used the idea of being a small island as part of the national self-definition. Churchill spoke of "the island race" and "defending our island" almost as often as he spoke of "England". Actually, it's not just in times of war that the small island mentality surfaces. It's one of the most consistent clichés of British identity. It provides a language of modesty and self-doubt but also a language of defiance and pride.

One of the commonest tropes - more popular, it is true, when Britain had an empire - was to contrast the "smallness" of the island with the great things that the British had achieved. Conquering a quarter of the globe, launching the industrial revolution, inventing the railways and the steamship, exploring unknown regions of the world. And this, of course, is precisely what Romney is attempting to do in the quoted passage. Yes, Britain ("England") is a "small island". Yes, its roads and houses are small (and to an American, its roads and houses most certainly are small, especially the houses). And yet "only two lifetimes ago, Britain ruled the largest and wealthiest empire in the history of humankind."

This is a remarkably British thing to say - or rather was, since celebrating the imperial sway of a century ago is now distinctly unfashionable. I don't know what the passage goes on to say: perhaps to contrast the relatively meagre resources with which the United Kingdom dominated the world with the much more substantial potential of the United States. But was nevertheless a sentiment of praise rather than of belittlement. There is, it's true, the suggestion that with a few exceptions Britain doesn't make "the things that the rest of the world wants to buy". And it doesn't, sadly, any more. The days of our manufacturing greatness were fading into memory a hundred years ago. Today it's China that makes the things that the rest of the world wants to buy. What does the UK "make" that the world wants? Dodgy financial products and smart advertising, mainly. And the demand for dodgy financial products is not what it was.

We should thank Mr Romney for pointing out these home truths. Not that anyone over here was unaware of them, of course.
Email Post
Labels: Olympics US election US politics