Lie Detectors: do they work, and does it matter? 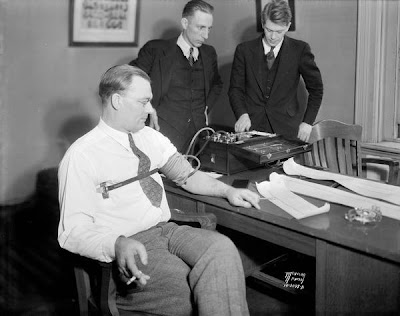 It's generally accepted that serial sex offenders may continue to pose a danger to society even after being released back into society at the end of their sentence. That, ostensibly at least, is why this country (like several others) maintains a sex offender register. As part of the monitoring process of those sex offenders deemed to pose a particular threat, the government is apparently proposing to subject some 750 of them to "lie detector" (or polygraph) tests. Enthusiasm for the scheme seems to come from the very top, given that quotes given to newspapers are attributed to "Downing Street sources" rather than to the Home Office, as might be expected.

The Downing Street sources are pointing to the supposed success of a pilot scheme that has been running in the Midlands. As evidence, we are told that offenders subjected to the tests were "more honest with their offender managers" and provided more information about any potential threat they posed. They made twice as many disclosures about prohibited behaviour (such as contacting victims) to probation staff as those not tested. And some said that undergoing the tests had "helped them manage their own behaviour more effectively". (A slightly puzzling one, that.)

David Cameron is said to be "impressed" with these results, and hoping that the use of lie detectors can be, as they say, "rolled out" across the country.

What the government does not seem to be claiming is that polygraph tests actuallywork, in the sense that they can detect lies and confirm truth within an acceptable margin of error. And indeed the scientific evidence for this appears to be slight, or non-existent. The most thorough assessment of the method's reliability, a 2003 report from America's National Academy of Sciences, concluded that it might produce better than chance results in many cases, but there was "little basis for the expectation that a polygraph test could have extremely high accuracy." Other research has been even less positive. For many Skeptics, polygraphs are about as scientific as one of L.Ron Hubbard's E-meters.

In questions concerning innocence or guilt, where someone's freedom is at stake (as opposed to, say, the Jeremy Kyle show) it would seem unreasonable to rely on something so inherently dubious. Especially as the apparently "scientific" nature of the test might lead some to give it more credibility than it is due. This would be a particular problem if it were being proposed that polygraphs be admitted as evidence in court. This does not seem to be the case here, though: we are talking about offender management.

At least I think so. There's an ambiguous statement in the Guardian's report that "offenders found to have broken their licence as a result of a lie detector test would be sent back to prison," which might imply that judgements would be made based on whether or not the subject passed the test. The Telegraph report is more circumspect, noting merely that the tests had "led to" some offenders being returned to prison. So it might simply mean that the offenders were being sent back to prison because of incriminating information that they had volunteered while taking a polygraph test, rather than because they failed one. It's an important distinction.

If I admit to having done something, because I fear that I am about to be found out anyway, does it matter if my fears were based on belief in a piece of possibly bogus science? The police have rarely been shy of using psychological techniques to extract confessions - for example, by alluding to conclusive proof that may not, in fact, exist, or suggesting that an accomplice has already confessed. "Come on, mate, we know you did it." If you've seen The Singing Detective, you may remember the scene where a schoolmistress identifies the boy who has shat on her desk by announcing that God will find out the culprit. The terrified miscreant (stand-in for a young Dennis Potter) recovers himself enough to point the blame on another boy, but only because he's so much the teacher's pet that she can't bring herself to believe the accuracy of her technique. But it worked.

What we're talking about isn't quite the same as a placebo effect. If that applied (and it might well do) then belief in the efficacy the test itself would cause a subject to pass or fail it. What the government seems to be relying on here is a pscyhological effect rather than a psychosomatic one. Seeing the wires of the polygraph prompts confessions, rather as (though for a different reason) seeing the instruments of torture prompted confessions in previous centuries. The more convincing the deception (which includes the self-deception of the examiner, whose belief in the process also matters) the more likely it is to produce the desired effect. That's why a "scientific" set-up, preferably with men in white coats deploying obscure teminology, will likely be more effective than, say, a cardboard box with "lie detector" written on it.

There are obvious moral problems with this idea (such as the undesirability of lying to secure confessions), and also practical ones: the longer the scheme goes on, and the wider its geographical spread, the more likely it is that offenders will become aware of the dodginess of the underlying science, and thus be unwilling to produce voluntary confessions. If they can't be sent back to prison on the strength of a negative test alone (and, given the state of the evidence, that would be outrageous) then this could destroy its long-term viability. And this isn't just because offenders will stop confessing. It's also because publicly backing known pseudoscience is likely to prove embarrassing for politicians.
Email Post
Labels: Crime police Politics science