Melinda and the Pope 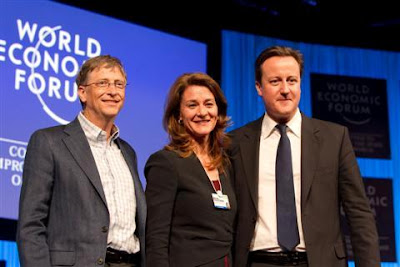 Some interesting thoughts from Melinda Gates, who is in London to promote contraception, especially in the third world:

Gates, who was a speaker at the London Summit on Family Planning organised by her foundation in conjunction with the UK government and the United Nations Population Fund (UNFPA), said that since she announced her new direction a few weeks ago she had been inundated with messages of support from Catholic women, including nuns.

"A church is made up of its members, and one of the things this campaign might do is help women speak out. I've had thousands of women come on to websites and say" 'I'm a Catholic, but I believe in contraception.' It's going to be women voting with their feet."

The identity of the "nuns" who are supporting her isn't revealed, but their existence isn't altogether inconceivable given the recent travails of the Leadership Conference of Women Religious in the USA.

As for Catholic women in general, it's no secret that many use artificial contraception despite their church's 45-year ban on its use. The degree to which their conscience is troubled by ignoring church teaching must vary. Gates' own Catholicism comes into play here in an especially pointed way, however, because this doesn't merely involve her private life. She is spearheading a campaign, and spending a great deal of money, promoting something that the leadership of her church continues to regard as sinful. She was asked about this apparent conflict of interest:

Now if you were, say, the Pope, you would probably have two things to say in response to that. First, that the Truth remains the Truth regardless of how many people believe in it, and that sin remains sin however many Catholics indulge in it. Catholic doctrine isn't a popularity contest. It isn't a matter of votes and debates, as in the General Synod of the Church of England. The deposit of the Faith shall stand for all eternity, et portae inferi non praevalebunt adversum eam. That's the first thing.

And the second thing is this. The whole of the faith is a self-sustaining mechanism. As Tim Stanley wrote recently, "its theology is like a delicate spider’s web: remove one strand and the entire structure would collapse. It can’t be done." The ban on contraception isn't just an eccentric add-on, but flows from and expresses the church's understanding of the sacredness of life, the need for Catholics to defend and preserve be open to the creation of life. So by saying that she wants to be able to pick and choose "amazing things" to believe in, Melinda Gates is saying, in effect, that she doesn't want to be a Catholic. Catholic means "universal". There's no such thing as a-la carte Catholicism. If you think there is, you've misunderstood the whole idea.

If you accept this, then you're faced with a choice: either it's all true, or none of it is. Richard Dawkins understood this clearly, when he wrote many years ago:

The newspapers are full of snivelling modern Catholics, whingeing over the fact that the Pope [John Paul II] stands up for his Catholic principles, demands obedience to himself and forbids contraception, abortion, homosexuality, embryological research and sexual enjoyment. They complain that he is illiberal, patronising, bossy, meddling, intolerant, bigoted, misogynistic, old-fashioned, dictatorial and ignorant. But what on earth do they expect? That is what the Church they have bought into is about. It always has been. If you don't like it, leave!

But it's not that simple. People like Melinda Gates exist in their millions. Most of them didn't ask to be Catholics: they were brought up that way, and, like Gates, relate to a great deal of it. They think and act more like Anglicans, in that obedience to the entirety of church teaching is less important to them than the basic principles of Christianity: they are Christians who happen to be Catholic. For them, being Catholic isn't primarily about signing up to what it says in the Catechism but belonging to families, communities, familiar and well-loved traditions. Millions live in countries where you have to make a considerable effort not to be a Catholic, at least nominally. And why should they leave?

It doesn't necessarily matter if bishops believe one thing and a large proportion of massgoers something else. But it matters a great deal if the bishops, as they have in the United States, claim to speak on behalf of Catholics as a group, and to threaten politicians accordingly, for example in their campaign against the Obama adminstration's contraception mandate. Through her philanthropic activities, Melinda Gates may help improve the lives of millions of women in Africa. She may also go a long way to restoring the credibility of Catholicism in the modern world.
Email Post
Labels: catholicism Politics religion sexuality