On hating the Olympics 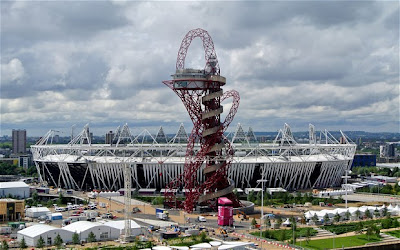 A lot of people have been getting rather upset over recent weeks - but especially over the past twenty-four hours - about certain aspects of the Olympics. Like the fact that spectators are being banned from bringing in "excessive quantities" of food, or T-shirts bearing political or commercial slogans, or large hats, or more than 100ml in liquid. Or news that a butcher in Dorset was told to remove a display of sausages in the shape of the Olympic rings from his window, on the grounds of copyright violation. Or the men arrested in a dinghy for sailing too close to the Olympic canoeing venue (later released without charge). Or the kid knocked off his bike for cycling too close to the sacred flame.

Or the banning of on-site caterers from serving chips in any non-piscatory context so as to preserve McDonalds' Olympic chip monopoly, even though McDonalds' do not and never have served "chips" with anything, preferring "regular" or "large" packets of something called "French fries", which neither look nor taste like what we earthlings call a chip.

Or the 13,500 troops that are being drafted in, turning the Olympic park into a version of Baghdad's Green Zone. Or the special lanes that have been set aside for Olympic officials and their limos. Or the missiles stationed on the roofs of local tower-blocks without so much as a by-your-leave: an outrage upheld by the High Court. Or the café that has had to stop calling itself the Olympic Café, as it has done for years, but the Lympic Café instead, which makes it sound like it trades in slightly dodgy herbal infusions. Or the suggestion that magazines have been warned not to use Olympic logos or Olympics-related codewords or offend the sponsors or risk being pulled peremptorily from the shelves of WH Smith. Or the fact that it will be difficult, for the duration, to get a train from Ramsgate.

"Olympic fascism," says Cranmer. "The Olympics belong to the world: they are the people's games."

"What is being played out in London reflects a legacy of the war on terror and deregulation of unbridled corporate power – both elite blunders that have ended in failure," says Seumas Milne. (Although, as someone Tweeted me, Seumas hates everything except Noam Chomsky and Uncle Joe Stalin, so this doesn't come as too much of a surprise.)

The dissident ex-ambassador Craig Murray suggests that visitors from Gulf and Central Asian dictatorships will feel right at home in "martial law Britain", especially given the "contempt for the ordinary citizen" shown in the prioritising of all persons and things corporate, official or military.

To complete the left-right chorus of boos, Delingpole thinks that all these assaults on freedom of speech and movement in the name of security and corporate profits are somehow un-British.

We haven't been invaded and conquered since 1066... And we're, what, expected to give up our ancient freedoms in order to sate the Nero-like whims of a bunch of pampered, greasy, crypto-fascist sports administrators in return for the dubious privilege of forking out billions of our taxpayer pounds to watch our athletes get thrashed in all the serious track and field events, while only picking up gold for the really weird sports that no one cares about?

Everybody complaining about it but going along with it anyway?

Un-British? Well, at least we can rely on the rain.

As a sports event, the Olympics is obviously overrated. It's too big and diffuse. It lacks a theme. It will never stir the heart the way the football World Cup can. Many of the sports are obscure, or boring, or both. The Olympic "ideal" was absurdly pretentious long before it became irrevocably linked to the vainglorious dreams of politicians or the self-interest of corporate sponsors. The notion of spectator sport as an engine of individual moral improvement, of the harmony of nations and of economic growth or as a cure for national couch-potatodom was always unrealistic, as a recent report from Theos (pdf) set out. There was always an air of pure bollocks about the Games, as these words from Baron Pierre de Coubertin make plain:

O Sport, You are Peace!
You forge happy bonds between the peoples
by drawing them together in reverence for strength
which is controlled, organised and self disciplined.
Through you the young of the entire world learn to respect one another,
and thus the diversity of national traits becomes a source of generous and peaceful emulation!

He said that in 1912. Two years later he turned out to have been a trifle over-optimistic.

The sentiment continues to be trotted out, however, and when applied to what is now a festival of purest commercial self-interest is bound to enrage. Two articles in the Guardian earlier this year gave a more realistic picture of what is going on. On the one hand,

what many legal experts consider to be the most stringent restrictions ever put in place to protect sponsors' brands and broadcasting rights, affecting every athlete, Olympics ticket holder and business in the UK.

and on the other

London is also being wired up with a new range of scanners, biometric ID cards, number-plate and facial-recognition CCTV systems, disease tracking systems, new police control centres and checkpoints. These will intensify the sense of lockdown in a city which is already a byword across the world for remarkably intensive surveillance.

The gigantic security budget, though, is part of a trend: in the midst of auserity and global recession, the past few years have seen an unpredented boom for the "loose confederation of defence, IT and biotechnology industries" that make up the domestic security sector. The Olympics operation belongs in the same realm as the government's monstrous proposals for email surveillance, now the subject of lacklustre Parliamentary scrutiny. As for the draconian protections - many legally novel and outrageous - enacted in the interests of corporate sponsors, these too are scarcely out of keeping with zealous copyright laws that see a young British student facing extradition to the United States for offences allegedly committed in his own bedroom.

The Olympics merely provide a uniquely public and unavoidable demonstration of the world, and the country, we have become.

(Or as a brilliant Tweet from Rob Lyons summarised it, after this went up, "All modern Britain's bullshit, turned up to 11.")