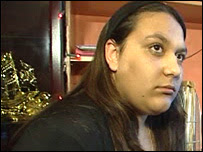 Here we go again. A teenager has been sent home from school for insisting on wearing a symbol of her faith. This time, it's a Sikh, 14 year old Sarika Singh, and the offending article is an iron bangle, or Kara, which Sikhs are supposed to wear as a visual reminder not to commit sins. As such, it might be compared to the "purity ring" which 16-year old Lydia Playfoot from Horsham wanted to wear as part of a campaign to discourage others, and presumably herself, from engaging in sex. She took her case to the High Court, you may remember, where she lost. Equally unsuccessful was Shabina Begum, whose campaign to wear an all-enveloping "jilbab" was backed by Hiz b'ut Tahrir. Sarika and her parents hope to do better.

Sarika, who is half-Welsh, has become increasingly devout over the last six months. She says, "The Kara is a very important Sikh symbol and a constant reminder to me to do good, and that God is One. I am very disappointed that my school does not recognise my right to wear the Kara."

She has the support of Welsh equality supremo Ron Davies (yes, that Ron Davies) who believes that the school is in breach of the 1976 Race Relations Act - Sikhs, even half-Welsh ones, belong to an acknowledged ethnic group - as well as more recent human rights legislation.

Meanwhile the following ominous statement issues forth from Cardiff: "The Welsh Assembly Government will shortly be issuing guidance on a range of issues associated with school uniform policies and the wearing of school uniform including equality, health and safety and discrimination issues."

At least Aberdare Girls School in South Wales, which Sarika attends (or rather doesn't), is consistent. It bans religious symbols of any kind, including crosses, turbans and (with more courage, perhaps) the hijab. Headmistress Jane Rosser, said, "We have a strict and clear code of conduct that has been in place for many years... We use this established code of conduct to ensure equality between all pupils."

Lydia Playfoot's school, by contrast, permitted both hijabs and Sikh bangles, while having a zero tolerance policy on all other jewellery. The judge upheld this on the grounds that the act of wearing the ring was not "intimately linked" to her religious belief.

These cases are tiresome. Normally, I would be with the school in its desire to create an equal and secular space - but a bangle? What's so wrong with a piece of jewellery anyway? Worst of all is the way school boards invariably take refuge in arguments about "health and safety" to prohibit utterly inoffensive items. It wasn't so long ago that teachers used to encourage boys to bring a penknife to school to help in craft lessons. Rings and bangles never did anyone any harm.

Rather than back down on a small point of principle for the sake of harmony, and concentrating on what really matters, which is this girl's education, the school insists robotically on the to-the-letter application of rules simply because they are rules. Even if a rule is, like this one, completely irrational. And they refuse to back down even in the face of a legal battle which will not only leave Sarika's education potentially damaged but waste thousands of pounds on a battle that will only serve to enrich lawyers. Of course, Sarika and her parents aren't blameless either. But wearing the bangle clearly matters to Sarika far more than it could conceivably mean to the school.

If Sarika loses, her school will have been vindicated at the price of much avoidable disruption and distress. But if she wins, the result will be a further privileging of religion and group identity at the expense of the secular public space which we all need to see. Especially now, with the Government's absurd enthusiasm for funding centres of superstitious indoctrination otherwise known as "faith schools".

By no stretch of the imagination could wearing a bangle damage Sarika's education or lead to religious or ethnic divisions. The same cannot be said, of course, for the hijab, which is by its very nature divisive (and intended to be so) but which most schools, in the faux-liberal name of "equality" or "diversity", are happy to indulge. The hijab is part magico-religious throwback (arising from belief in the malefic potency of women's hair), part misogynistic hangover, part political provocation. It separates and excludes, it carries with it a vast weight of cultural baggage, it changes the way its wearers perceive themselves and are perceived by others. But to point out these basic facts, in the current climate of officially-sanctioned doublethink, is to invite the inevitable accusations of Islamophobia. Far better to make everyone suffer.

My solution? Everyone should lighten up a bit. Provided an item of jewellery is reasonably unobtrusive and doesn't make its wearer overtly conspicuous, let it be. But not out of "respect" to religion, or culture. If a girl wants to wear a ring that symbolises her virginity, let her. But let the girl sitting next to her wear the ring given to her by her boyfriend for precisely the opposite reason. Let the Sikh girl wear her bangle, let the goth girl wear one decorated with skulls. As for Muslims, they should be invited to come up with an item of jewellery of their own: perhaps a necklace bearing the declaration of faith (shahaadah) in Arabic script. Thus they will be able visually to assert that There is but One God and Mohammed is His Prophet, not that He has a Problem with Women.
Email Post
Labels: human rights multiculturalism religion