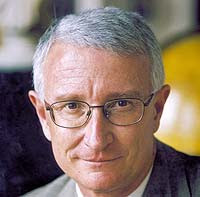 Good news from Oxford. Vice Chancellor Dr John Hood is to go at the end of his first term in office. Bad news: that's not until September 2009.

Hood is the man who attempted to destroy hundreds of years of academic independence by replacing traditional structures with a board dominated by external directors with backgrounds in politics and finance. Such a body would in all probability have had no more independence than Ratzinger's curia.

Hood has had a hard time since it became clear that his aim was to turn the ancient university into a sausage-machine the principal purpose of which was to implement government policies and meet arbitrary performance-criteria. Several of his opponents have been elected to the University Council and the atmosphere has turned a (presumably dark) shade of blue.

Meanwhile the current issue of Oxford Today magazine offers readers a chance to put questions to Hoodie in time for an interview to be published early next year. Dr Hood says, "I look forward very much to hearing from readers all over the world and to sharing some thoughts on the issues uppermost in their minds about our great university."

Should be interesting. But perhaps not too interesting. The authorities at Wellington Square are well-versed in the dark arts of spin.

In June 2007 it was even revealed that the University press office had been monitoring and editing comments in Hood's Wikipedia article in an attempt to protect his reputation.