How to get on in Society

First it was the Christians, demanding the withdrawal of Monty Python's Life of Brian and Martin Scorsese's Last Temptation of Christ.

Then it was the Muslims, burning copies of The Satanic Verses and proclaiming death to Salman Rushdie. 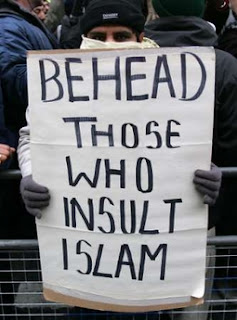 Then it was the Sikhs, threatening a riot outside Birmingham Rep where a play, written by a Sikh woman, was deemed "offensive" because it dealt with sensitive issues. Such as institutionalised violence against women.

Then it was the Christians again, in the person of the absurd Stephen Green, a.k.a. "Christian Voice", this time seeking to prosecute the BBC for broadcasting Jerry Springer the Opera.

Then it was the Hindus, demanding (and getting) the withdrawal of some Christmas stamps because they featured Nativity scenes done in an Indian style and were thus "insulting" to Hinduism.

Then it was the Muslims, again, murdering Dutch film-maker Theo Van Gogh and demonstrating against the Danish cartoons of the Prophet Mo, on the grounds that if Muslims choose not to depict him, no-one else should be allowed to either.

Then it was the Buddhists, or at any rate well-meaning local busybodies acting on behalf of presumed Buddhists, objecting to the naming of a restaurant in Durham "The Fat Buddha".

What sacrilege and profonation are they complaining of, then? Who are the blasphemers? 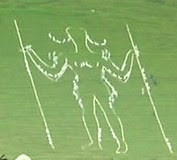 In their latest stunt, they got 100 women to dress in white and take up carefully-chosen positions on the Long Man of Wilmington, the (allegedly) ancient 227ft long chalk figure on the Sussex Downs.

As a result, the male figure (though his masculinity suffers in comparison with the better known Cerne Abbas Giant) was transformed, briefly, into a woman with breasts, cellulite and curly hair.


When the scene was filmed in July, pagans staged a protest against what they saw as the "disrespectful" treatment of their sacred heritage. The Sussex Archaeological society issued what read like a grovelling apology. Chief executive John Manley said,

It was not the society’s intention to cause offence. The society is proud of its curation of the Long Man. In future the society will consult representatives of the Pagan community and other interested parties before sanctioning any significant activities.

Not that this placated the protestors. One Newell Fisher set up a campaign group to put pressure on ITV to drop the item. Notwithstanding his efforts, and those of others, the offending footage was broadcast on Tuesday.

This site is sacred, part of our heritage, and needs to be protected, not disturbed and descecrated just for a TV Show!

I've watched the programme in the past, loved it, like the girls etc, but no longer will I, my friends or family watch their work due to this disrespect being shown to the pagan community and our land.

They would not do it to a mosque or a church, so why do it to our sacred sites!
Absolutely shocking behaviour. I will be putting in complaints to Ofcom.

Perhaps she should get the backing of her local police force. That always goes down well with Ofcom.

Pagans would not in their wildest dreams consider putting female breasts and clothing on effigies of any of the Holy Prophets, be it Jesus Christ, Buddha or any other revered figure of another faith.

Why then does ITV commission Trinny and Susannah to do so at the Long Man of Wilmington? If this was a Christian or Muslim site there would be all kinds of trouble, and they wouldn't even consider going there at all.

One can see their point. The beliefs of pagans are no more daft than those of mainstream religious believers. Considerably less so, in fact. No virgin birth for them (they celebrate sex in all its forms). No miraculous resurrections. No Holy Book dictated by God to an illiterate trader who went on to lead armies, ordain massacres and have sex with a girl of nine. No inquisitions, no jihads, no suicide bombers, no misogynistic hang-ups. Just a bunch of folks dancing round bonfires and doing their bit for the environment. Sometimes by not bothering to wash.

And, with the concession from the Sussex Archaeologist, they are officially "the pagan community". As we all know, being "a community" opens the door to special treatment. There's even now a minister for communities, Opus Dei enthusiast Ruth Kelly. But how to become a community? That's easy. Complain.

Finding something offensive. Demanding "respect". Suggesting that anyone who stands in your way is a bigot ("Racist!") or suffering from some sort of disease ("homophobia!"). That has become, in Britain, the royal road to the cherished "community" status, and the power that goes with it. Identity is forged in the fire of oppression; and if there isn't any real oppression, make some up. It's what the gay "community" did. It's what the Muslim Council of Britain have been doing with their absurd concept of Islamophobia, by which anyone bringing up awkward issues such as the widespread abuse of women by Islamic males is made to feel like a racist. It's what some claiming to be acting for the Hindus are now trying to do.

And how well do the pagans appropriate the language of the tsars of multiculturalism. The perennial Christian complaint - "You wouldn't say that about Islam" - is neatly turned on its head by the likes of Laura and Herbmoon. It's almost as if they are afraid that by not upping the ante in the discrimination stakes they would cease to exist, at least as "a community". I whinge, therefore I am.

Fortunately, not all pagans have bought into the respect agenda. Here, for example, is Keziah writing a couple of days ago:

I’d like to register my disgust at the arrogance of my fellow practitioners who seem frankly delighted at this opportunity for a bit of a moan. Look guys, just cause the other ‘religions’ (amongst which I wish we were not counted it is a ludicrous term) feel the need to be all high and mighty to define themselves, doesn’t mean we have to.

She even enjoyed the programme:

What the program did with the long man was great. It was perfectly respectful and in keeping, even worshipful if u get really in-depth. A celebration of the feminine with the help of the masculine, aspects of male and female in cooperation. Just what’s needed in today’s social atmosphere of self degradation, isolation and fear.