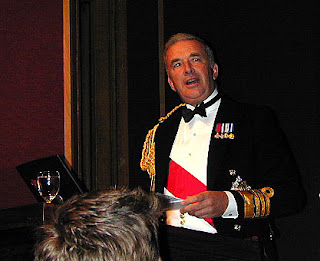 Never appoint a non-politician to do a politician's job. They might end up doing something really embarrassing, like telling the truth.

The appointment of Admiral Sir Alan West as security minister must have seemed like a great idea at the time. Here was someone independent and respected, who could be relied upon (and be seen) to put the national interest ahead of narrow party advantage. A man all people could trust. What better example of Gordon Brown, statesman and father of the nation, showing how serious he was about protecting Britain from the terrorists?

Lord West was given the job of drawing up plans to protect the national infrastructure from possible attack. And remarkably, this independent man has come up with a whole host of sensible, moderate, practical proposals. Like installing window glass that doesn't shatter into dangerous splinters when a bomb goes off. Or installing roadblocks in the approaches to prominent public buildings.

"We don't want to do the terrorists' job for them" he said today. "We want to live our lives normally, to go about our business normally."

All very uncontroversial. Unfortunately, the Today programme doesn't do uncontroversial, so John Humphreys this morning asked him about some of the government's more eye-catching proposals. Such as extending the period of pre-charge detention from the already doubled, doubled and doubled-again 28 days.

Lord West didn't see the need for it. And, shock horror, he said so.

I want to have absolute evidence that we actually need longer than 28 days. I want to be totally convinced because I am not going to go and push for something that actually affects the liberty of the individual unless there is a real necessity for it.

But surely classified intelligence reports proved the case for a higher time limit? After all, that is what the government keeps telling us.

I still need to be fully convinced that we absolutely need more than 28 days and I also need to be convinced what is the best way of doing that.

Of course, this is no more than most independent people have been saying for some time. It's true that some suspects have already been detained for close to the maximum period. But that's only an instance of Parkinson's Law proving its veracity. The police will detain suspects for as long as they can, and it will take them that much time to gather their evidence. The more time they have, the longer they will need. And all that time the suspect will be deprived of liberty for reasons that may well turn out (and often have) to be entirely spurious.

Unfortunately, Lord West's rational and balanced approach is not what the government wants us to hear. They want us to believe that the country is under permanent siege from legions of technologically advanced and almost undetectable terrorist masterminds, whose Dr Evil-style sophistication leaves our puny security services struggling to catch up.

Otherwise, we might be less willing to give up, one by one, all the civil rights we used to take for granted.

So a couple of hours later, the Home Office issued a "clarification", apparently in the admiral's own words.

I am quite clear that the greater complexities of terrorist plots will mean that we will need the power to detain certain individuals for more than 28 days...
I am convinced that we need to legislate now so that we have the necessary powers when we need them. The Government would be failing in its responsibility to protect national security if we waited until we needed more than 28 days to act.

So what new evidence has suddenly been made available to Lord West, who has been studying the terrorist threat closely for the last three months, to make him change his mind so quickly?

I was stating this morning that there will need to be scrutiny in the system, and robust evidence against individuals, to safeguard their rights.

No you weren't, Westy. You were saying that you weren't convinced there was any need for an extended time limit.

"I'm just a simple sailor," he added at lunchtime.

Of course, Lord West was this morning giving us the benefit of his considered opinion. And when he got back from the studio he was presented with a statement denying his considered opinion and told to sign it. Everyone knows this, but of course no one in the broadcast media would be so ill-educated as to actually say it out loud. It would be bad form.

Far better perpetuate the fiction that everybody "out there" in the real world is too stupid to notice.


UPDATE: Home Secretary Jacqui Smith now says (5.10 pm) that the reason for extending the period of detention is that "some time in the future there might come a time when 28 days isn't long enough". If that's the best justification the government can come up with they really are losing it. She also tied herself up in the most extraordinary knots when Eddie Mair asked her if she believed that women should be allowed into mosques. After waffling for a bit about it "not being a question for me" she eventually allowed that it was something about which Muslims might like to "start a debate". I wonder what she'd have said if it had been a question about golf clubs.
Email Post
Labels: civil liberties Politics terrorism