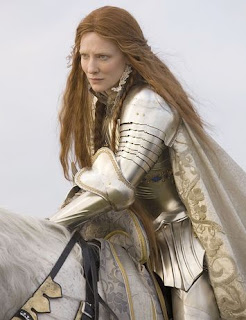 Shekhar Kapur's film Elizabeth: The Golden Age has been extravagantly praised by some critics, ridiculed by others (for example, Peter Bradshaw). The Cate Blanchett vehicle certainly plays fast and loose with history (though less so than its predecessor, The Virgin Queen) and anyone looking for a subtle analysis of the issues at stake in late 16th century Europe should probably look elsewhere. Kapur provides a reassuringly old-fashioned goodies and baddies interpretation of history, with the Spanish firmly in the role of the baddies: it has been described as the most pro-British (for which read English) film since Olivier's Henry V. A paradoxical achievement for an Indian director working with a largely Australian cast. Blanchett appears to be enjoying herself hugely. For the great set-piece oration at Tilbury she seems to be channelling Joan of Arc more than Gloriana, a vision in shining armour and free-flowing red hair. At other times, she serves as a mouthpiece for conventional liberal pieties about freedom of conscience, contrasting here as elsewhere with the fanatical and reactionary power-lust of Jodi Molla's Philip II.

One would expect such a confection to put a few Latin noses out of joint; and sure enough the Florentine professor of history Franco Cardini has been quick to denounce the epic, which recently premiered in Italy at the Rome Film Festival, as a “distorted anti-papal travesty”.

"A film which so profoundly and perversely falsifies history cannot be judged a good film," declared Cardini. Which is a somewhat bizarre principle of cinema criticism: would he apply it to Shakespeare, I wonder? His main beef, though, was not with the film's accuracy per se but with its perceived bias. It had potentially offered “a contribution to the understanding of a moment of vital importance.” Instead, the Virgin Queen was portrayed as “an able politician 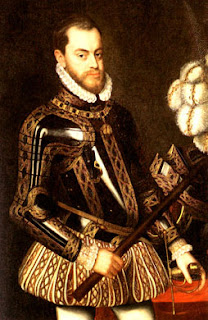 and courageous sovereign” while King Philip II of Spain was shown as a “ferocious, fanatical Catholic, swinging his rosary like a weapon and roaming the Escorial Palace like a madman, full of impotent fury, dreaming of subjugating the world to the Catholic faith”. And while the defeat of Phiip's armada came across as a "shining victory for free thought against the forces of darkness in the form of the Inquisition", Kapur had ignored the persecution of Catholics in England, the "illegal trial" and execution of Mary Queen of Scots, and Elizabeth's sneaky policy of encouraging Protestant dissenters in France; behaviour in stark contrast, according to Cardini, with Philip's noble and selfless support for the Venetian Republic in its struggle with the Turks.

And then the professor rather lets the cat out the bag:
"Why put out this perverse anti-Catholic propaganda today, just at the moment when we are trying desperately to revive our Western identity in the face of the Islamic threat, presumed or real?"

Cardini was writing in Avvenire, the official organ of the Italian Bishops’ Conference. And while it has been stressed that his opinions were in no sense an official statement of Vatican policy, there's little doubt that the remarks carry the authentic hallmark of Ratzinger's papacy. Ever since his notorious Regensberg speech last October, when he approvingly quoted a Byzantine emperor's belief that Mohammed had brought the world only violence and evil, it has been clear that he sees his mission partly as shoring up Christianity, and in particular Catholicism, as part of the moral armory of the West in its supposed duel to the death with Islam. Cardini is now saying that Catholicism is the "authentic fulcrum" of Christianity, without which there can be no defence against secularism and Islam. In this view, not just secularists but "apocalyptic Christians" form a sort of fifth column opening up the gates of Europe to the Islamic hordes.

Elizabeth's crime, in Cardini's eyes, seems to be that by renouncing Rome and refusing to carry out the will of the King of Spain she was working against the interests of a united Christendom. It's a view which seems to have more to do with a romantic view of the Crusades than any historical reality: it didn't take wars of religion to get the monarchs of Europe fighting it out, after all, they were busily doing that long before the Reformation. It does, on the other hand, carry an interesting echo of Trevor Phillips' recent well-publicised remarks in which he credited the Turks with helping to defeat the Armada by prosecuting their own war with Spain. 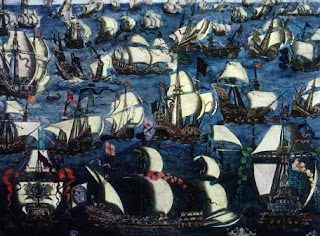 Cardini doesn't quite say it, so I will: in this film the Catholics are cast in the role nowadays given to Muslims. As representatives of something foreign, threatening and historically retrogressive, seeking to subvert a free and Protestant England, to "destroy our way of life". A threat on the horizon, but also over here, organised in small treasonous cells. Elizabeth's spymaster Walsingham urges a policy of zero tolerance; Elizabeth herself stresses her attachment to justice even while offing her cousin's head.

This, of course, fits in well with the traditional English narrative. But history is far more complex and subtle. In the sixteenth century, Spain was a transatlantic superpower, dominating the seas and drawing in vast wealth from its American dependencies. And what was England? For all the talk of a golden age, the reality was of a poor and struggling kingdom whose very survival depended on manipulating the balance of power and, where possible, by-passing the Spanish-dominated trade routes. Hence the contacts, which Cardini presumably deplored, with the Islamic Ottoman and Mughal empires, and with Russia, which most of Europe would have regarded as a desert of rude and barbarous heretics. And where forced to share space with the Spaniards, Elizabethans lived where possible by piracy.

Viewed from Rome or Madrid, the Virgin Queen was a usurper, a mercenary, a despot and a terrorist. England was a rogue state, the bastion of an alien and dangerous religion. Elizabeth was denounced in Papal bulls, rather than UN resolutions, but the principle was surely the same. Supporters of regime change, internal critics, were identified; a possible puppet ruler, Mary Queen of Scots, was set up in the hope of fomenting a spontaneous uprising; and when that failed a huge task-force was assembled, a "coalition of the willing" drawn mainly from Spain, with a few co-opted client states making up the numbers.

Shekhar Kapur has vehemently denied that his film is anti-Catholic. "It is anti extreme forms of religion," he said. "It's anti any interpretation of the word of God, which can be singular." That sounds like Catholicism to me; in any case, it's hardly cheerleading for the Ratzinger doctrine. Blanchett's Elizabeth mouths liberal pro-democracy platitudes that George Bush would be proud of, but in the sixteenth century's war on terror she was cast in the role of Osama.
Email Post
Labels: culture Elizabeth I history Pope religion terrorism