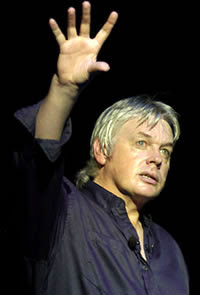 It seems that David Davis finally has a challenger. Labour refused to put up a candidate to defend its record, and Kelvin Mackenzie dropped out, despite the endorsement of Simon Heffer who oddly described him as "a profoundly serious and intelligent man" and "a thinking man's Boris Johnson". But, with the deadline for nominations in Haltemprice and Howden approaching tomorrow, a high-profile name has confirmed that he intends to stand. And it's another David. David Icke.

The reptilophobic former goalkeeper's website announces that "He will stand under the title 'Big Brother - The Big Picture' after a tremendous response to the idea over the last few days." It seems that Icke's legion of online groupies have been urging him to stand and expose the worldwide lizard conspiracy to the glare of the world's media. Not that he particularly wants to get elected, nor even opposes much of Davis's platform. As he says in his election address,

I am not standing to oppose David Davis as such because I have no wish to be elected to Parliament and get stuck in that irrelevant web of deceit and corruption. I couldn't take my seat anyway because I would never go through the pathetic ritual of pledging my 'allegiance' to the Queen.

I would be supporting the stand of Davis against the Orwellian State and I would want him to win the seat and let him be a voice against the Big Brother society in Parliament.

There is an enormous amount of what David Davis stands for on other issues that I fundamentally disagree with, but this is a time for all colours, creeds, backgrounds and views to unite on something that affects ALL of us - the tearing down of the most basic freedoms.

So why is he standing against Davis, then? Simple. He thinks it is An Opportunity. He will be able to let people know the Big Picture, of how international governments, carrying out the instructions of the Bilderburg Group, the Illuminati, and the Reptoids from Sirius or wherever it is Reptoids come from, are busily creating a world-wide slave state of which Brown's terrorist legislation and ID cards are just a local manifestation. As Icke says,

The same is happening in countries worldwide at the same time because it is centrally and globally coordinated, as I have been exposing and detailing for these last two decades. The UK Labour government is just the vehicle for introducing it in the UK, that's all.Because this election, with its mainstream media coverage, can be a platform to gain publicity for the big picture behind the Big Brother State - which I have been highlighting and warning about in my books and public talks for nearly 20 years.

David Davis has seen one level of it and blames the Labour government for destroying civil liberties in Britain. But it is bigger than that, much bigger. The same is happening in countries worldwide at the same time because it is centrally and globally coordinated, as I have been exposing and detailing for these last two decades.

"Yes, of course, the mainstream media will ridicule me," says Icke. "But so what's new? I am not doing it for them, nor to win a popularity contest, nor even an election."

No, just to bugger up the other David's. And what is the subliminal message that will be conveyed by the coverage of this development? That concern for civil liberties and the ancient traditions of parliamentary debate, magna carta and the rule of law is the province of conspiracy theorists and nutters. That serious, sober politicians get on with the "hard choices" of re-shaping society as a sort institutionalised paranoia in which no-one trusts anyone else but rather puts their trust in an omnicompetent state.

Is David Icke a New Labour stooge, I wonder? What is needed, and what David Davis's principled stand was intended to provide, is a serious, grown-up, wide-ranging debate about the role of the state and its increasing intrusion in the lives of individuals: an intrusion that may be intended for the best motives or (more likely) propelled by by a combination of administrative convenience, fear of tabloid headlines and the general atmosphere of risk-aversion, but which in any event has nothing to do with extraterrestrial lizards. Fat chance of that debate happening now.

An wonderful article in the Guardian by Jan Morris today put the matter plainly:

Anyone can see that in Britain, 2008, individuality is being suppressed, so that year by year, generation by generation, the people are being bullied or brainwashed into docile conformity. What is more ominous is that so many want to be docile. They want to be supervised, cosseted, homogenised, obedient.

A few more generations of nagging and surveillance and we shall have forgotten what true freedom is. Young people will have foregone the excitements of risk, academics will temper all thought with caution, and the great public will accept without demur all restrictions and requirements of the state. Ours will be a people moulded to docility, perfect fodder for ideologues.

She speaks with the wisdom of Teiresias. Or should that be Cassandra?

Without doubt Icke's candidacy is very bad news. The Labour party revealed its contempt for democratic debate when it refused to field a candidate; but that tactic may have proved a masterstroke, depriving Davis of the serious challenger he really needs.

"David Icke to stand in Big Brother by-election" is the headline above his statement. I doubt the double-meaning is intentional, but it has potency nevertheless. This was supposed to be a by-election about Big Brother. But with the Monster Raving Loony Party, a former beauty queen, and now the Conspiratologist-in-Chief, Haltemprice and Howden is beginning to make the Big Brother house look like a haven of sanity and serious thought.
Email Post
Labels: civil liberties conservatives conspiracy theory David Davis Politics

Olive said…
There's one thing that puzzles me about Davis' stand- he was quite happy to vote for 28 days, so it's clearly not the principle of detention without charge that he has a problem with. I'm having real difficulty with seeing this as anything more than a stunt.
25 June 2008 at 22:10

Anonymous said…
I thought Jan Morris' piece was excellent. Kudos to the Grauniad.

Re: Icke - by-elections are traditionally occasions that bring out the loons. Everybody knows that by now, surely? But you could be right - if he's received online encouragement, who knows where it came from? Does his site have one of those code thingies that blocks robots? If not, the Labour front bench could have got through.

Re: 28 days. I think Davis was wrong to support it and perhaps he regrets it. I'm not a great fan of his. But rather him than nobody, which is the option the 'liberal' elements in politics seem to favour.
26 June 2008 at 08:28