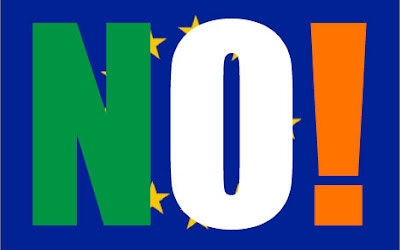 David Davis is yesterday's news already. Now attention shifts to Ireland, where, oh bliss, the people who were once Brussels' most loyal and subservient tributaries have thrown out the Lisbon Treaty. If you take the view, as almost all impartial observers do, that this document is the rejected Constitution by another name, then the result confirms what has become the trend in European referendums: when the people are asked, the people say No.

The incomprehension, anger and contempt with which the political elites are already greeting this decision has a familiar ring. The Irish didn't know what they were voting about, we learn. They were just rejecting unpopular politicians (as though that were a bad thing to do). 26 other countries "want" this treaty (which is true, but only synecdochically: "country"="that country's political leadership"). Europe mustn't let this minor incident "derail" the "progress" that has been made already. You know the drill. This time there isn't even the pretence, as there was after the French and Dutch rejected the Constitution, that the views of the voters need to be taken seriously, that the result poses a real threat to the ratification progress and to the ever-growing powers of the centralised EU. (Though it's hard to see how much further the process can go. As Dizzy has discovered, the British government doesn't even have the power to set the date our clocks go forward.)

"I believe that the treaty is not dead. The treaty is alive," said José-Manuel Borroso, EU Commission president, with all the confidence of Michael Palin's pet-shop owner but rather more credibility. The Brussels Blue might be pining for the Irish peat-bogs, but otherwise it's not a remotely sick parrot.

It's a game, and everyone knows it. Many of the changes in the Lisbon treaty have been introduced already, or can be sneaked through under some other heading. Even as the Irish people cast their No votes they knew it wouldn't make any difference. It may even the case (I speculate here) that the result would have gone the other way if the electorate believed that it would make a difference. But be that as it may. A No is a No, and in a democracy that would be that. But the EU is not a democracy, and inasmuch as it is a province of the EU Ireland is not a democracy either. In the coming days we will once again be reminded of this obvious truth.

After all, as Mark Mardell has it, "to go back to the drawing board is unthinkable to those who would have to do the work, as well as fairly pointless." The problem is not one of this or that opt out or piece of special funding. Increasingly, the problem is with the European project itself. Not just its remoteness, its lack of accountability, its trough-happy MEPs, commissioners and bureaucrats or its manifold inefficiencies and waste, but the whole notion of an ever-increasing superstate. Euroscepticism, once as British as pork pies or incompetently-executed penalty shoot-outs, has spread throughout the continent. Apparently now the Germans are even rejecting Euro-notes printed in Italy or Spain.

What is laid bare by the Irish referendum, what was laid bare by the French and Dutch referendums, and what would have been laid bare by the promised British referendum, is the gulf that now exists between the political class (which also includes much of the media and business classes) and the general public. It's a gap, increasingly, of mutual incomprehension. The elites are convinced that the people just don't understand the issues properly; and that if they did, they would support the centralised re-organisation of Europe. The people cannot understand why it should be that the politicians they freely elect do not seem to represent their interests. This is an impasse. As Disraeli wrote, in a different context, the politicians and the people have become,

Two nations, between whom there is no intercourse and no sympathy; who are as ignorant of each other's habits, thoughts and feelings as if they were inhabitants of different planets; who are formed by a different breeding, are fed by a different food, are ordered by different manners, and are not governed by the same laws.

A similar divergence is apparent in the reaction to David Davis's resignation. In the Westminster Village, on all sides of the House and most if not all sections of the media, there were two responses: either Davis was principled but stupid, or he was playing out some internal Tory game. Either way, he had blown it. Out in the country, however, as measured by blogs and contributions to message-boards and phone-ins, the response was very different. Some disagreed with his opposition to 42-day detention, others (including me) hoped he would now be able to put himself at the head of a great new coalition for freedom; but the great majority accepted his action at face value and welcomed his trust in democratic accountability.

Perhaps that in itself explains the horror with which Davis's decision has been greeted by the political/media establishment. For the obvious implication conveyed by his gesture is that the widespread suspicion of and impatience with the official political process is something that he shares.
Email Post
Labels: Europe Politics

Anonymous said…
Rather than just bore you by agreeing with you, I thought I'd send you a nice uplifting video linky thing. We can fly - we can be free! Hope this works...

MC Barros said…
"Apparently now the Germans are even rejecting Euro-notes printed in Italy or Spain."

lol you shouldn't believe that story. They would probably reject the euro all together, if given a chance, but the nationality of the paper is irrelevant to them. I travel very often between Portugal and Germany and to date no German has had any problem with my Portuguese euros. Actually, they seem to like them a lot!
14 June 2008 at 23:09

Anonymous said…
Like the war in Iraq and detention without trial, this just seems like too big a thing to wave through from parliament, without asking the people. And when you ask them, what do they say? No. They said it in France and Ireland and they'd say it in the UK, in Italy and countless other countries. So, of course, they don't ask.

The EU is unintuitive for most people. How can there be one central government for dozens of disparate states with different languages and cultures, and only a passing interest in one another? If the Lib-dems ever got their referendum, they wouldn't like the result.
16 June 2008 at 10:54