Things are obviously looking up for Gordon Brown. In a new Marvel comic book he has a cameo role helping the eponymous "Captain Britain" fight the menace of green-skinned alien invaders known as Skrulls. "It turns out the Home Secretary was a Skrull," he tells the assembled superheroes. "My cabinet... there's just three of us." 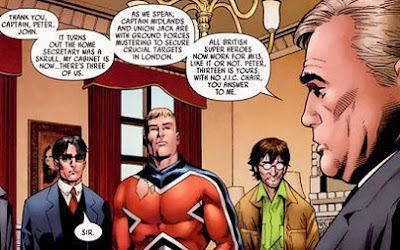 Brown, Ed Balls and Mrs Ed Balls, presumably. But Skrull or not, Jacqui Smith is now credited with saving the PM's political skin. And it does all seem to be over. 42 days detention without trial is almost certain to go through. Not because there are any good arguments for it. Not because the government has made any meaningful concessions, or because any of the facts that led the House of Commons to fix on 28 days have changed. It's just that Gordon Brown decided to stake what remains of his authority on this arbitrary figure; and since Labour MPs seem to have decided, for whatever reason, not to dump him for the time being he shall have his way.

The government has provided itself with a few fig-leaves to cover its nakedness. Their pet policeman, Ian Blair, was more than happy to exaggerate police incompetence in the face of "plots of increasing complexity" in order to back a campaign for new powers his officers almost certainly don't need. (Actually, it's not the "plots" that are complex - they tend to be of a childish simplicity - but the numbers of people who might just be involved and who thus have to be painstakingly tracked down, arrested, interviewed and crossed off the list.) Then there the "independent" reviewer of terror legislation, Lord Carlile, a man who was more than happy to speak up for ninety days when Tony Blair wanted him to. Why he hasn't been thrown out of the LibDems for his illiberal and undemocratic sympathies I have no idea. And, er, that's it. Unless you count the opinion polls, which have a tendency to show a depressingly shallow attachment to civil liberties among a majority of the population. Britons will be slaves.

Basically, this is naked politics dressed up as national security. Brown decided on extending the period of pre-charge detention as one of his ambitions when he took over as leader last year. It was part of a strategy to show that he was "tough", no more and no less. The liberties of the citizen are little more than a bargaining chip with which Brown and his opponents play their political games. Ironically, if Brown were still riding high in the polls today it's most unlikely that the Labour rebellion would have collapsed so easily, or indeed that the PM would have staked so much on such an unnecessary piece of legislation, which even its warmest supporters admit is intended to cover an imagined future possibility. Against a strong prime minister, the rebels would have held firm, as they did against Blair when they (but so narrowly!) defeated the truly draconian and more wide-ranging proposal for ninety days. But then, a premier less in need of self-assertion might have let the whole matter quietly drop.

So another principle is sacrificed on the altar of political expediency. Has anything been gained from the long campaign against the new laws? Possibly. For one thing, the debate may just have revealed the limits of Parliament's tolerance for the erosion of civil liberty in this country. The three-month proposal is effectively dead, and even Brown's initial push for 56 days has been watered down. New Labour's default position on all matters law'n'order - when in doubt, abolish another liberty - may just have hit the buffers. We'll have to see.

The "concessions" that Jacqui Smith offered the rebels last night, on the other hand, don't seem to amount to very much. There's supposed to be new Parliamentary oversight, and new safeguards against the new provisions being introduced at all. But, as Philip Johnston of the Telegraph points out, even these minor nods towards the rebels' finer sensibilities are not all they seem:

These are not concessions at all. They were in the original proposals when they were published last December; and while Jacqui Smith may have tinkered a bit with the wording and managed the sell the changes to gullible backbenchers as significant, they are nothing of the sort....

It was always intended there should be a "triple lock" protection against arbitrary use of the power. A High Court judge, the Director of Public Prosecutions and, ultimately, Parliament, would have to approve an extension beyond the current 28 day limit.

The essential argument remains the same; and those MPs who previously stated this was an issue of inviolable principle about the liberty of the individual cannot now say that they have managed to water down the legislation, because they haven’t.

What the rebels have been offered, though, is a figleaf to cover their moral nakedness. And this, perhaps, is all they ever wanted. While some of the rebels were, and still are, principled defenders of civil liberties, others - enough to tip the scales - care more about their seats. Another defeat would have crippled the government beyond even a putative Brown replacement's capacity to revive; whereas Brown knew that if he gave way on this issue his political impotence would have been laid bare. Thus was the rebellion doomed.

For this inevitable outcome, Jacqui Smith now gets the credit. Nick Robinson is even picking her as the next Labour leader, on the grounds, among other things, that the party's voting system "tends to favour women":

Who better, goes the theory, than a straight-talking Midlands mum, an Aston Villa season ticket holder, who still holidays in a caravan in North Wales to take on the Tory toff Cameron.

After all, Robinson reminds us, Harriet Harman got elected, to widespread surprise. On the other hand, in 1994 the system didn't favour caravan-owning Margaret Beckett. And Harriet isn't likely to resign in sympathy with an ousted Gordon. Smith and Harman? It might be someone's dream ticket, but they both look like Skrulls to me.
Email Post
Labels: civil liberties Gordon Brown Politics terrorism