The Daily Mail today carried an interview with Sarah Desrosiers, the "funky" King's Cross hairdresser who has been ordered to pay £4,000 to a failed job applicant on the grounds of "hurt feelings". The applicant, of course, is a hijab-wearing 19 year old Muslim who wears one of those seraphically smug expressions often seen on young women who have convinced themselves, or have been convinced, that having weird ideas about hair makes them morally outstanding. 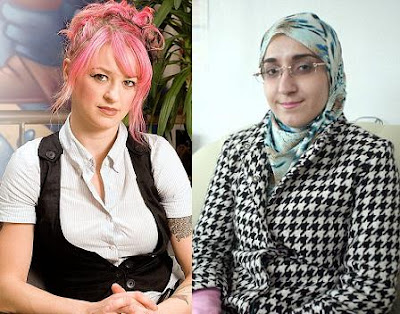 She lost her main claim: the employment tribunal conceded that the salon owner's desire to have staff who proudly sported the fashionable coiffures in which she specialises was an entirely reasonable one, and that she did not "directly" discriminate on racial or religious grounds. But Ms Desrosiers was still found liable, on the grounds that, in the words of the tribunal,

There was no specific evidence before us as to what would (for sure) have been the actual impact of the claimant working in her salon with her head covered at all times. We concluded that, on a critical and balanced assessment, the degree of risk, while real, should not be assumed to be as great at the respondent believed.

Bushra Noah claims to have suffered emotional distress as a result of the failed 10 minute interview. Sarah Desrosiers, on the other hand, has suffered more than a year of stress and heartache. "For months, I couldn't sleep, I couldn't eat, I felt as though my whole life was on hold," she said. "All I could see was that I'd be forced into bankruptcy and lose my business." The case has cost her an estimated £40,000 in lost income and legal expenses, her salon has almost gone to the wall, and she now faces the agonising decision of whether to appeal.

If she did, she would (in the view of most people who have expressed a view, and certainly mine) have right on her side. The whole case was vexatious and ridiculous. Ms Noah was not being discriminated against for wearing a hijab, she was discriminating against herself. There are many good reasons why her choice of attire was inappropriate to the environment in which she sought employment, and Desrosiers' expectation that her staff show off the hairstyles in which she specialises is entirely reasonable. Indeed, the tribunal half-acknowledged this.

But if the decision was ridiculous, it is important to understand why it was reached. However satisfying it may be to condemn Britain's culture of political correctness, to worry about appeasement or accuse Noah and other high-profile litigants of waging a "soft jihad" aimed at establishing Islamic supremacy or at the very least getting special treatment, such expressions of exasperation are ultimately meaningless. It was not "political correctness" that handed Noah her £4,000, it was the tribunal. And the tribunal was not, for all the huffing and puffing of secularists and Mail readers alike (to be joined, in all probability, by the Bishop of Rochester), promoting a secret anti-Britishness agenda. It was doing what all courts and tribunals do, attempting to interpret and apply the law.

If there is a culprit here, then, it is the law. In particular, the Employment Equality(Religion or Belief) Regulations 2003, which shift the burden of proof in such cases onto the defendant. The claimant has merely to prove that dismissal or (in this case) failure to gain employment might have been the result of discrimination. It is up to the defendant to prove that it was not. Section 29 runs as follows:

(2) Where, on the hearing of the complaint, the complainant proves facts from which the tribunal could, apart from this regulation, conclude in the absence of an adequate explanation that the respondent -

(a) has committed against the complainant an act to which regulation 28 applies; or

(b) is by virtue of regulation 22 (liability of employers and principals) or 23 (aiding unlawful acts) to be treated as having committed against the complainant such an act,

the tribunal shall uphold the complaint unless the respondent proves that he did not commit, or as the case may be, is not to be treated as having committed, that act.

This, of course, is contrary to the general principle of English law that it is up to the plaintiff to prove his case - in civil cases, on the balance of probabilities. Worse, it serves as an open invitation to anyone who has been refused a job to put in a claim, and can put an almost impossible burden on employers. Desrosiers had the case stacked against her. Although she was able to produce a cogent justification for her decision not to employ Noah - that she feared the incongrous staff member would detract from her business - she was unable to prove it to the exacting standards of the tribunal. As they said, "the degree of risk, while real, should not be assumed to be as great at the respondent believed."

That employment law is in such a sorry state is the result of an EU directive, 2000/78/EC of 27 November 2000, which was slavishly adopted in the amendment to the Race Relations Act cited above. Section 31 of that document states:

In other words, all Noah had to do was prove that she was a Muslim, and she had already won. And there's nothing anyone can do about it. These laws are no longer decided by our elected representatives.
Email Post
Labels: Europe Islam law multiculturalism religion respect

Anonymous said…
Good comment by BatleyMuslim on Cif pointing out that this young woman won, but British Muslims lost.

'These laws are no longer decided by our elected representatives.'

Heresiarch said…
As I see it (though I haven't been able to study the ruling properly), the best grounds for appeal would be the words "for sure" in the sentence, "There was no specific evidence before us as to what would (for sure) have been the actual impact of the claimant working in her salon with her head covered at all times." They imply the tribunal applied too high a standard of proof. All Desrosiers needed to show was that she had reasonable grounds for believing that the headscarf would adversely affect her business. I hope she does appeal; a case like this could open the floodgates.
18 June 2008 at 19:50

Anonymous said…
Let's hope the poor woman does win an appeal. It's hard enough running a business without having to fight against legalised scams like this.
The tribunal system should be used to fight real injustice, but, as you say, now it's basically 'I'm a Muslim!' 'That'll do nicely.'
And yes, that bloody woman does have a smug smile. Why is it so often women who are the worst offenders in this respect? Why don't they value Western freedoms instead of abusing them so often? Or are there usually beardy types putting them up to it?
19 June 2008 at 09:26

Olive said…
I don't understand the niqab thing; if her own hair is so alluring, couldn't she just have an embarrassing hairstyle, rendering it slightly less alluring? Or, if it's something in the very nature of the hair itself, could she not just wear a wig?
19 June 2008 at 18:24