Storm in a Coffee Cup 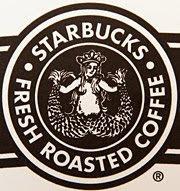 This is actually rather an old story (just as the "new logo" is merely a commemorative revival of the chain's original design, and only features on a limited number of polystyrene cups). The Telegraph reported it more than two weeks ago, and it was doing good business Stateside some days before that. It seems to have first surfaced in Advertising Age on May 8th, whence it was swiftly picked up by Gawker. From there it went global, inspiring comedy sketches and learned discussions on the origin of the twin-tailed mermaid (an alchemical symbol, possibly related to the sheela-na-gig). What it doesn't appear to have inspired, however, is an actual boycott. And until the Beeb picked up on the item, the tale was beginning to fade away.

Not much to worry about, then. Still, it's a great story. Not for the obvious reasons - prudish Americans getting upset about possible nipple-sightings. No: the man behind the "complaint", 30 year old Mark Dice of San Diego, is not your typical moral campaigner. He quotes the Bible selectively, it's true, but religion is less his thing than conspiracy theory at its most all-embracing, which he propagates by ringing up right-wing radio talk-shows or ambushing people on the streets of major American towns with his ideas and posting the results on YouTube. You know the sort of thing: 9/11 was a put-up job, Illuminati control the world, they secretly worship owls, and (perhaps a novel twist) the kind of machines predicted in the Terminator films are secretly being built in readiness for Armageddon. Dice comes across as a younger, hipper, less po-faced David Icke, but perhaps he's just taking the piss. When he first started out in the conspiracy business, used to use the pseudonym John Conner. As in Terminator, of course, only spelt differently. "Conner"="One who cons".

Still, he's not lacking in grandiloquence. The Press Release which started this merry-go-round of "news" (churnalism at its most churnalistic) claims that the Resistance "has over 3000 members nationwide" and "has made international news for rebuking various Hollywood celebrities for their ridiculous behavior, including Jessica Simpson, Paris Hilton, 50 Cent, Tom Cruise and others. They also demanded that Duke University change the name of their “Blue Devils” sports team to something not offensive to the Christian community." These "facts" were dutifully reported, and then re-reported, in all the news outlets.

On the website to which all links ultimately lead, the Resistance claims to be "a political and media watchdog movement focused on spreading and preserving the quality of life that God designed us to have." It seems, though, to be largely devoted to promoting Dice's book, The Resistance Manifesto, which you can buy through the site and perhaps (or perhaps not) elsewhere. According to the blurb, it

contains 40 chapters and 416 extensively researched and documented pages drawing from declassified documents, mainstream news articles, religious texts, and personal interviews. A dark web of evil is exposed like never before, making Bible Prophecy and the New World Order crystal clear. Learn the most powerful information on the 9/11 inside job, plans for the rise of the Antichrist, the institutions, people, and powers involved, and how you can fight them.

In any event, Dice can't be that much of a prude. This Borat-style skit is typical of his YouTube output.

"File this under ridiculous press releases" said Advertising Age's Ken Wheaton in his initial write-up of the Starbucks "protest". And indeed Dice's effort is a parodic masterpiece:

Starbucks has recently introduced a new version of their logo which features a topless mermaid with her legs spread, which has caused outrage from a nation wide Christian media watchdog organization. The Resistance... is boycotting Starbucks across the country saying their new logo is inappropriate.

“The Starbucks logo has a naked woman on it with her legs spread like a prostitute,” explains Mark Dice, founder of the group. “Need I say more? It’s extremely poor taste, and the company might as well call themselves, Slutbucks.”

But Wheaton's dismissive attitude didn't prevent the story going global, in the process no doubt generating much-valued free publicity for Starbucks as well as for Mr Dice. Perhaps it was the "Slutbucks" line that did it. Advertising Age returned to the story last week, featuring a denial from a senior Starbucks executive that they had anything to do with the "controversy". "Are you kidding me?" Stanley Hainsworth is quoted as saying. "We wanted to be invisible. We wanted the conversation to be about coffee, not about anatomy." And, indeed, the new revivalist logo isn't as lewd as the original one: this time, the mermaid's nipples have been covered by hair.

Advertising Age also spoke to Dice himself, who commented detachedly, "If you make a comment about the Starbucks logo, it goes all over the news. It's a fascinating phenomenon." He added, "We've made points on various issues but nothing has gotten the exposure of this. This one took off and went viral."

Like all viruses, this one flares up and then dies away, and can be hard to contain.
Email Post
Labels: culture general weirdness journalism moral panic sexuality

WeepingCross said…
I seem to remember a gentleman in Bournemouth many, many years ago who kept up a very diverting correspondence with the 'Evening Echo' of gradually escalating outrage at the tide of filth engulfing the town, to culminate in an offer to knit cossies for the statues in the local museum. Can we hope this is something along those lines?
2 June 2008 at 22:12