He may still be theoretically the most powerful man on the planet - for another seven months - but does anyone still care about George W. Bush? He's just started on his "farewell" (or is that Good Riddance?) tour of Europe, a whirlwind that will take in summits, photo-opportunities, an audience with the Pope and tea with the Queen at Windsor Castle. Today it's Germany, tomorrow he'll be recalling good times with his old mate Silvio Berlusconi, soon to be the sole survivor of that improbable quartet that also embraced Aznar of Spain and Tony Blair. But Dubya he might as well be touring golf courses for all the interest he's garnered. In the words of one un-named Brussels diplomat, "The US-EU summit is only being held because it is on the schedule." Even the protesters, who could once have been relied upon to turn up in their thousands at the mere whisper of his name, have been muted. After all, what's the point?

Any late second-term president becomes slightly irrelevant, of course. And George W Bush has never been popular in Europe. What's rather more surprising is that his star looks to have waned even among his natural - and once most whole-hearted - supporters, the Southern Baptist Convention. His visit to Europe meant that he couldn't be with the pro-life Bible-believing traditionalists in person this year, but he did thoughtfully send them a taped video-message which was played at the conference in Indianapolis yesterday. By all accounts, its reception was less than ecstatic. According to Ed Stoddard, writing for Reuters, this "luke-warm" response "stood in marked contrast to the standing ovations he received last year from the same group when he did a live broadcast link to its meeting in San Antonio".

Stoddard wonders if this response reflects disappointment that Bush hasn't managed to "pursue their anti-abortion and gay rights agenda with the vigor they had hoped for" during his long years in office. Given that he was so busy with the war on terror, saving democracy from Islamic fundamentalism through the paradoxical expedient of toppling the most secular ruler in the Middle East, it's hard to see what else he could have done. He has, after all, managed to appoint two impeccably conservative judges to the Supreme Court. I thought Bush was a hero to these people. One of the most memorable scenes in that scary film Jesus Camp involved self-styled "children's pastor" Becky Fisher wheeling out a cardboard cutout of a benignly smiling Dubya and inviting her young charges to pray over it. 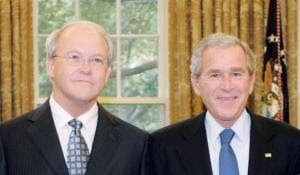 Perhaps the Religious Right realise that their influence is fading even faster than Bush's. This year the 16-million strong Convention revealed its lowest number of baptisms for more than twenty years. Rumour has it that John McCain has begun attending Southern Baptist services - though he hasn't taken the plunge - but even that is unlikely to endear him much to the baptist leaders, many of whom, according to Stoddard, regard him as "a liberal compromiser". He's mistrusted "because of his past support for stem cell research, his failure to support a federal ban on gay marriage, and his support for immigration reform, among other things". But he's (just) preferable to Obama, who was described by one Baptist conference-goer as "a die-hard socialist".

I think they will miss Bush after all.
Email Post
Labels: Bush religion US politics