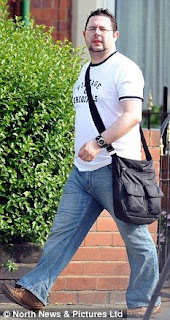 As you may have heard, last week saw the collapse of a (fairly) high profile attempt to resuscitate the 1959 Obscene Publications Act in respect of written material found on the internet. Darryn Walker, a 35 year old civil servant from Tyneside who looks uncannily like the Comic Book Guy from The Simpsons, had written a particularly nauseating story about the pop group Girls Aloud, and had deposited it in an online archive. Afua Hirsch, whose in-depth (and somewhat pro-censorship) analysis appeared in The Guardian yesterday, writes that Walker's tale belongs to a sub-genre known as "popslash", wherein "the unlucky subjects are celebrities in the music business". I really must get out less. Walker's writing is "darker than most" she comments. I should hope so. I'm going to quote one of the less explicit paragraphs from "Girls (Scream) Aloud", just to give you an impression of how ghastly it is. You might want to skip it.

From somewhere out of sight, they could hear faint laughter: A man's laughter. All five girls were getting very frightened. They wriggled futilely in their restraints as the sound of footsteps sounded in the distance and the shape of a man loomed into view.

He was large muscular and naked with a huge erection. His face was obscured by a black leather executioner's hood and only his eyes and mouth were visible. The girls tried to back away as he approached them. He went for Cheryl first and effortlessly hauled her to her feet and dragged her to where five hooks hung from the high ceiling. He untied her wrists then snapped handcuffs on them, this time in front of her. Then he pulled her arms above her head and looped the chain of the handcuffs over one of the hooks so as she stood suspended with her feet just barely touching the floor.

Then it gets really nasty. Short version: the girls are taken one by one to be tortured and dismembered in front of their remaining band colleagues; they are also forced to perform, and endure, acts of sexual violation; the narrator finds all this sexually stimulating, and the tale ends with him planning to do the same thing to his sister.

While certainly depraved, Walker's story is far from being the only sick fantasy out there in cyberspace. So why this piece of writing in particular? The fact that Walker's "story" concerned real people must have had something to do with it, but the CPS prosecution seems to have been based on the idea that unsuspecting children might come across it while seeking general information about the group. In fact, this was never remotely likely - the story was hidden in a specialist archive, and could only have been accessed by someone looking for it, or something like it. The crucial defence evidence, it appears, was provided by freelance journalist (and regular contributor to The Register) John Ozimek. Ozimek found, not only that any search for Girls Aloud will turn up millions of hits, but that even Googling "Girls Aloud + rape + murder" gives around 100,000. So the chances of happening upon Walker's story by chance were non-existent.

The Obscene Publications Act, with its highly subjective test that material should tend to "deprave and corrupt" those who come across it, was never likely to be of much use in the digital age. As Walker's barrister, Tim Owen QC, told Hirsch, "the idea that, in a world where almost anyone can be an online publisher, you can use the 1959 legislation to police the written word on the internet is completely unrealistic." Hirsch herself writes of "the despondency amongst the authorities" who have "no hope of tracing or tackling the majority" of online filth. But she also comments that "it is precisely this growth in internet porn which is leading some to call for tougher sanctions and more prosecutions, reflecting the wider divide about the appropriate response towards sexually violent material, especially where it is accessible to young people."

In other words, the battle isn't over yet.

In terms of visual material, there are signs that prosecutors are turning to the new extreme porn laws contained in the Criminal Justice and Immigration Act 2008. (See here for my take on this.) The CJIA has a more easily met (if almost as vague) checklist of what characterises the banned images. Convictions may thus be easier to obtain. In a couple of recent cases, involving images of bestiality, prosecutors have chosen to use the CJIA were OPA charges would have been available. But of course there's a major difference between the two. CJIA criminalises mere possession, while OPA goes after the producers and distributors of obscene material. (This, indeed, was always my principal objection to the legislation.) And this year's Coroners and Justice Bill seeks to extend the principle to cartoon images of children.

In that light, I have to report an alarming development. A Conservative peer, Baroness O' Cathain, has tabled an amendment to the current Coroners and Justice Bill which would extend the CJIA provisions to written material. Her clause would make it an offence to be in possession of "extreme pornographic writing." According to the draft:

Writing falls within this subsection if it portrays, in an explicit and realistic way, any of the following—
(a) an act which threatens a person's life,
(b) an act which results, or is likely to result, in serious injury to a person's anus, breasts or genitals,
(c) an act which involves sexual interference with a human corpse, or
(d) a person performing an act of intercourse or oral sex with an animal (whether dead or alive),
and a reasonable person looking at the writing would think that any portrayal of such person or animal was realistic.

This language is taken directly from the earlier dangerous pictures law. But there's an obvious difference between filming something and writing about it. In the former case, there is at least the possibility that we are dealing with non-consensual acts, or acts in which real people suffer permanent harm. But words are simply words. There's another paradox. In the best-known OPA trial, that of Lady Chatterley's Lover, the book's artistic merit was adduced in its defence. Lady O'Cathain's proposed law would actually penalise good writing - for only those able to create "realistic" portrayals of people would be caught by it. Whatever might be said about Girls (Scream) Aloud, it wasn't remotely realistic.

There's also an obvious loophole. The clause defines its target as "written words (including but not limited to those published or otherwise available on the internet), books, leaflets or other printed matter". So spoken words - which might be considered more "arousing" or "dangerous", being more visceral - would seem to be exempted. On the other hand, the act would presumably criminalise most of the oeuvre of the Marquis de Sade which, however great its literary merits, is basically pronographic.

So who is this woman? Ennobled by John Major, she's a former director of the Barbican Centre - indeed, her full title is Baroness O'Cathain of the Barbican. In 1994 the Independent described her as "the most hated woman in the arts", citing accusations by former colleagues and employees of a "reign of terror" and "a balance sheet mentality". On the other hand, in financial terms her tenure was, the report admitted, quite successful - she managed both to increase the level of subsidy and gain larger audiences. Perhaps she was merely out of sympathy with the prevailing leftie arts mainstream.

Coming from a conservative Catholic Irish background, O'Cathain has gained a reputation in the Lords as a campaigner for traditional and religious values. It's said that her opposition to civil partnerships led to her departure from the board of British Airways after Stonewall threatened a boycott. In the course of the debate she made Ahmadinejad-style noises about the rarity of gay people in Northern Ireland. The same year she opposed the legal recognition of sex changes on the grounds that "the basic proposition of the Bill is mistaken. A man cannot become a woman. A woman cannot become a man". She also mounted a rearguard attempt last year to save the ancient crime of blasphemy. She told the chamber:

Let us be clear. The amendment before us proposes to legalise the most intense and abusive attacks on Christ, who is the central figure in our history. As the Bible records, God has exalted Him to the highest place and given Him a name beyond every other name. The fundamental question is this: should we abolish Christian beliefs and replace them with secular beliefs? As long as there has been a country called England it has been a Christian country, publicly acknowledging the one true God.

Not surprisingly, she is one of the Christian Institute's favourite politicians. But she's not all bad. TheyWorkForYou records that she voted "very strongly" against ID cards, and she once suggested that members of the House of Lords set an example to the public by taking Latin lessons. No, really.

There's almost no chance of her amendment becoming law. It is badly-drafted - almost nonsensical, indeed - and it's unclear if it has any support. But it does, perhaps, set down a marker. It suggests that, with the OPA effectively dead as regards written online material, lawmakers and campaigners are casting around for something that they can use to police the web. What normally happens next is that the government rejects the proposal, but acknowledges that the problem exists and so announces a "consultation" before coming forward with its own proposals. So I wouldn't be too surprised to see Lady O'Cathain's loopy amendment come back in some other form.
Email Post
Labels: censorship culture Politics Society