Both the Telegraph and the Mail carry articles by Simon Caldwell about the defrocking of a priest who was closely associated with the supposed apparitions of the Virgin Mary at Medjugorje in the former Yugoslavia - a kind of spiritual Disneyland which has attracted millions of pilgrims over the past 30 years, despite being disowned by the Catholic church. He describes this as "a massive blow" to the shrine's many devotees, although they must be used to such disappointments by now. One might think that the Vatican would be keen to exploit the great faith-affirming (and money-making) potential of the Holy Mother's visits. But no. The church authorities have established commissions of experts, they have demanded scientific proof, and having found none they have pronounced the whole thing bogus (unlike, for example, Lourdes, which is completely genuine). Yet the pilgrims keep coming. And the Virgin is still delivering her messages. She and the pope are locked in a game of metaphysical chicken. 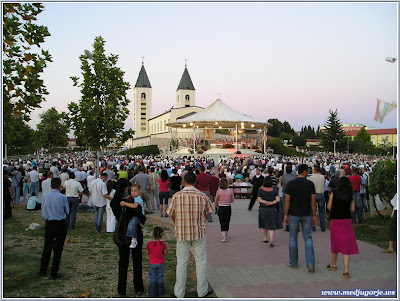 In truth, the row has always been as much a power struggle as a debate about the genuineness or otherwise of the apparitions themselves. The visions may be inauthentic - even, it is alleged, fraudulent - but, what is worse, they are unauthorised. Fr Tomislav Vlašic has been treated as a renegade for years now - even before the "miraculous phenomena" began in 1981 - but this new development brings to an end an investigation that began last year. Vlašic was confined to a monastery for the duration and, Caldwell reports, "he was forbidden to communicate with anyone, even his lawyers, without the permission of his superior." The spirit of the Inquisition is alive and well, it seems, and entirely unaffected by the European Human Rights Convention.

In the end, Vlašic gave up the struggle and jumped before he was pushed. Or perhaps he just begged to be let out. I've tracked down what appears to be the papally-approved document which was issued in March (on this forum) It's fairly hard-hitting.

It starts by referencing a "request" from Fr Vlašic to be released from his vows, but then goes on to describe the priest as "responsible for conduct detrimental to ecclesial communion, both within the doctrinal and the disciplinary ambit, and having incurred the censure of interdict". In other words, he has been both a heretic and a very naughty boy.

The Holy Father, it goes on, "has granted the petitioner... forgiveness of the incurred censure". However, the sting in the tail comes in the form of "a salutary penal precept - under pain of excommunication". He is "absolutely prohibited", not merely from exercising the ministry, but also from making any "statements about religion, especially with regard to the 'phenomenon of Medjugorje'". In addition, he is forbidden to stay in any property belonging to his former order, and any Franciscan superior who offers him a bed is threatened with dismissal.

Simon Caldwell was also responsible for a major hatchet-job on the Medjugorje circus last October in the Spectator. He described Vlašic, who acted as a spiritual adviser to the six original "visionaries", as "a genius at marketing the phenomenon in the West", but otherwise portrayed him as a libidinous con-man. Among the information he relayed was the following:

- In 1976, Fr Vlašic made a nun pregnant and packed her off to Germany, promising to renounce the priesthood and follow her. When he reneged, her landlord sent a copy of his love-letters to a senior Vatican official, one Joseph Ratzinger.

- Another local priest, Father Iveca Vego, was described by the Virgin in one of her appearances as a living saint. Shortly afterwards it emerged that, like Vlašic before him, he had made a nun pregnant.

- After he was kicked out of Medjugorje, Vlašic headed to Italy where he established a community devoted to the apparitions. There he "continued to party like a bad dog". He was accompanied by an Austrian woman who claimed to have been healed at the shrine and also by one of the visionaries, Marija. She left after a few months, however, allegedly after catching Vlašic and the Austrian having sex.

All the evidence indicates that the phenomenon is a calculated and cynical con. Medjugorje has grown wealthy and it is no coincidence that so have the seers. Some own executive houses with immaculate gardens, double garages and security gates, and one has a tennis court. Others drive BMWs and go on frequent foreign trips, and all have married — one of them, Dragicevic, to the former Miss Massachusetts, Loreen Murphy. It must have made Father Vlasic very proud.

There's another side to the story. The journalist John Cornwell visited Medjugorje about twenty years ago for a book he was writing and interviewed many of those concerned, including the local bishop who insisted that the whole affair was fraudulent and blamed it on the malign influence of the Franciscans (who had "been a nuisance to Rome for generations"). He was "neverthless convinced that despite the exploitation on the periphery, Medjugorje was an unusual focus of spirituality in modern times, one that outweighed the sum of his drawbacks." It "offered a message of hope" to "people who normally saw themselves as powerless, disenfranchised, helpless".

But that, of course, has been a characteristic of most great frauds throughout history.