In the Telegraph, Matthew d'Ancona wonders why Labour "decided to associate Cameron explicitly with a fictional character who personifies all that was best, most gleeful and is most fondly remembered about the Thatcher decade." After all, he notes, plenty of disagreeable things happened in that decade. And he has a suggestion:

I don't suppose it would have done Cameron and Osborne any favours to depict them as Brideshead's Sebastian Flyte and Charles Ryder from the great 1981 television adaptation, with William Hague as a bald Aloysius the teddy bear.

In the spirit of bipartisanship, I thought I'd have a go. 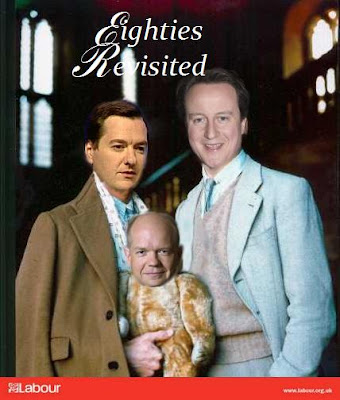