Ruth Gledhill of The Times reports that the Pope "has offered to meet more victims of clerical child sex abuse as the Roman Catholic Church continues its attempts to regain public trust."

That rang a bell. Then I remembered this image that appeared a couple of years ago on the New York Times website. 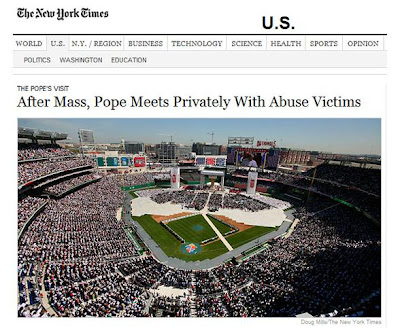 Father Lombardi, the Pope's spokesman who made today's announcement, also said (not before time) that local churches had to co-operate with police and the judiciary on child abuse cases. Because that's the law? Because it's the right thing to do? Not quite: "This is the only way to restore a climate of justice and full confidence in the institution of the Church."