Back to the Future? A review of Red Tory by Phillip Blond 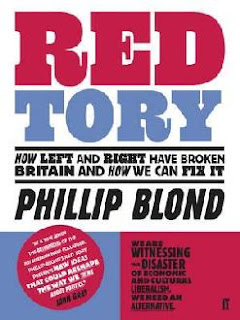 Phillip Blond's Red Toryism is high-concept political philosophy, a deliberate oxymoron, which may account for its popularity with sections of the media. That and the notion that he provides philosophical and moral ballast for the Cameron project. If Cameron wins on May 6th, this book may be seen as seminal - though it is no more likely to influence policy than Will Hutton's The State We're In did for New Labour. If the Tories don't win the election, it will be forgotten within a month.

Some of Blond's practical suggestions - centred around local community involvement and freeing public services from the deadening control of Whitehall targets and bureaucracy - have found their way into this morning's manifesto, though it's not clear to what extent, if any, he was personally responsible for them. But in any case they seem small-scale and meagre when set against the author's profoundly bleak assessment of the national condition, which takes up rather more than half the book.

His opinions will find an echo, somewhere, among many who find themselves out of sympathy with aspects of modern life. Religious conservatives of all denominations will bemoan, with him, the decline in marriage and the multiplication of pornography. Civil libertarians will share his distaste for the apparatus of a surveillance state which he is not embarrassed to call totalitarian. Daily Mail readers will like his attack on Welfare dependency, while Guardianistas will thrill to his evisceration of Thatcherism and neo-liberal free market economics. At times he sounds like a younger, less intellectual Roger Scruton, at others like Prince Charles. And throughout there's an undercurrent of barely-suppressed hysteria. "Passive and compliant," he writes, in a sentence that sums up both the tone and the content of Red Tory, "all we can do is shop."

I both agreed and disagreed with Blond's analysis, sometimes at the same time. The key point of his critique is that the monopolistic tendencies of the state and big business reinforce one another to the detriment of ordinary people and of the human-scale neighbourhood relationships that make life rich and rewarding. Society has been hollowed out. Instead, the state assumes a dominant position, and each individual's relationship with the state is one of dependence and supplication. By mitigating the worst effects of market capitalism, through the provision of basic services and a social safety net, the state makes possible the very exploitation it presents itself as counteracting. At the same time, social liberalism - and the solipsistic pursuit of individual gratification which (Blond thinks) it implies - dissolves social bonds, requiring an authoritarian state to maintain the peace. There's thus a close connection between the rampant liberalism of the markets and the increasing authoritarianism of the state, resulting in an increasingly unequal, fractured, mutually-suspicious and morally vacuous society.

"Back to the fifties" seems to be the message - though whether he means the 1950s, the 1850s or the 1250s isn't entirely clear. His evocation of the past is drenched in nostalgia. The vision he offers is bucolic and, in a sense, deeply reactionary - he complains, among other things, about the 18th century enclosure of farmland, and bemoans the decline of Northern working-class choral societies. A lot of bad developments turn out to be the fault of the Bloomsbury group. He hates television, which "presents children as sexually available"(!) and rhapsodises about real ale. Thinkers he disapproves of include not just the obvious (Adam Smith, Jean Jacques Rousseau) but Kant and John Locke. It's harder to identify who he does agree with, though he speaks highly of G.K. Chesterton and Hillaire Belloc, both of whom were essentially humourists - and, well, not exactly in the same league as Kant.

More than occasionally Blond recalls WS Gilbert's "idiot who praises, with enthusiastic tone, all centuries but this and all countries but his own." He praises German manufacturing prowess, Italian banking and Swedish community values. But then he lambasts Big Brother for "broadcasting casual sex between the 'housemates'", oblivious to the fact that such scenes occurred with much greater regularity in continental versions of the show. He damns the public services by pointing out that they have become less productive under Labour, while private productivity has increased by a third. That doesn't sit terribly well with his attack on big business for sacrificing human values to the bottom line, though, does it?

There are other gaping holes in Blond's analysis. In particular, he ignores the role that the market has played in lifting the standard of living of the great majority of people, bringing them material goods, cheap travel, entertainment, and indeed medicines that would have been unimaginable even a few decades ago. He says nothing whatever about immigration which, like it or loathe it, has wrought profound changes to the social fabric; but perhaps to admit this would spoil his odd vision of an unchanging community, cut off from the rest of the world and the forces of globalisation, which the markets and the state have invaded and despoiled. The book is long on rhetoric, much shorter on verifiable facts. His call for a "new politics of virtue" is so quixotic as to be practically meaningless.

Characterising the current state of society as combining private libertinism and public authoritarianism, Blond prescribes the reverse. But the past wasn't just a place of happy families and virtuous public spiritedness: it was also characterised by poverty, bigotry, low expectations and early death. The communities he hymns were stifling prisons for anyone who didn't conform to a narrow set of social expectations, for women who wanted to fulfil their potential, for gay people, and for those who lacked family to look after them. There were workhouses and debtors' prisons.

And yet, and yet... There are things here I found myself responding to. Blond's prescription for improving front-line public services by handing responsibility to front-line professionals answerable to the public rather than the administrative target-setters, for example, rings true. He suggests a model of co-ownership in which there is a direct relationship between citizens and service-providers, with the state doing little except providing resources. He argues for "a complete reversal of decades of employee mistrust and the embedding of centralised management as a result" - easier said than done, perhaps, but surely a goal worth aiming for. And sometimes I think he hits a bullseye:

The welfare state in itself is a vast body of employment, ranging from the front-line staff administering benefits to the professionals at the top managing the whole scheme. In essence, the social underclasses have become a product, the careful supervision of which gives constant opportunities both for employment and career advancement for those claiming, no doubt sincerely, to assist... Herein lies the great tragedy of the welfare state: it produces a managerial class whose interests, however unconscious or unintended, are intimately tied up with the eternal perpetuation of the problem they purport to address.

An odd mixture, then, of sensible moderation and romantic silliness. Ultimately, as befits a former theology lecturer, Blond has produced a tract - a Thought for the Day spun out to the length of a book. For all its pretensions, this is rather a shallow book. But his analysis, however sketchy, shouldn't be dismissed out of hand. He's definitely onto something.


Red Tory: How Left and Right Have Broken Britain and How We Can Fix It, is published by Faber&Faber (£12.99)
Email Post
Labels: books economy GE 2010 philosophy Politics