What's so offensive about Popegate 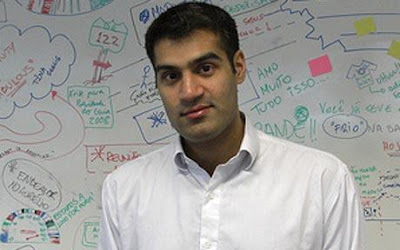 Balliol was once the home of effortless superiority. Now it would appear to be the home of brainless stupidity. The news that both men implicated in the Popegate dossier are graduates of one of Oxbridge's most intellectually elitist colleges ought to be a cause of major concern, even if the offence to Dr Ratzinger and his peculiar institution blows over. Yes, it was funny (if not at all witty). Pope jokes are inherently amusing, not least because the Roman Catholic Church is an anomalous absurdity and its current leader combines a Bond villain accent (and name) with a face that might have been put together by Hammer's make-up department. But I can say that; I'm not writing as a representative of the Queen and of the government that invited the pontiff to come over here in the first place. Nor, sadly, am I being paid handsomely by the taxpayer to sit around thinking up - sorry, "brainstorming" - juvenile pope gags.

Steven Mulvain, a wet-behind-the-ears 23-year old, was responsible for the distributing the bizarre document, which offered suggestions about the forthcoming Papal visit some of which were sensible and others fatuously offensive. But it was his somewhat more senior colleague Anjoum Noorani who we now learn was responsible for convening the forward-planning committee whose ideas, Benedict condoms and all, were so embarrassingly leaked. Some have played up the religious implications of Noorani's name. Indeed, there was apparently not a single practising Catholic on the committee charged with planning the papal visit. It's easy to contrast this casual approach to the sanctities of the Catholic faith with the aching deference this government traditionally shows to the real and imagined sensitivities of Muslims.

That somewhat misses the point, though. The clue is not in Noorani's (presumed) religious background but in his other background - the one he is standing in front of in this photograph, a whiteboard covered in squiggles. A "proper" Muslim would have had some understanding of the religious sensitivities involved and respect for the person of the Pope. A proper Muslim would not have been making jokes about condoms and abortion. Noorani's religion is not Islam but managementspeak and PR babble. He and his brainstorming session are symptomatic of the dumbing-down of public life.

Philip Johnston in the Telegraph had a good piece about the contamination of government by "jargon-filled rubbish imported from the world of management consultancy." But the problem goes beyond Birtification. See Charles Crawford's despairing account - from a former insider - of the damage wrought on the Foreign Office by Gordon Brown's obsession with targets. He is withering about how and the traditional diplomatic strengths of local knowledge and in-depth specialisation have been supplanted by a culture of buzzwords, fashionable enthusiasms and overarching visions. The ex-ambassador quotes a former colleague's complaint that the diplomatic service currently "has more people working on Change and Diversity issues than they have working on the Middle East peace process - a disgrace and utter madness, yet typical of the FCO's currently warped world view."

Crawford also noted the other day that "judgement" was no longer a criterion on which the Foreign Office assessed its staff. It has been replaced by more zeitgeisty concepts like "leadership" and "delivering results". It's easy enough to blame New Labour, with its love of targets and hatred of anything traditional or elitist, for this sort of tosh, but I suspect the Blair administration has been as much the symptom as the cause of it. Other, profounder, causes have been at play: a loss of nerve on the part of the old elites, the complete ascendency of the media and the news cycle, a generalised and growing distrust of institutions - most powerful when internalised by those who themselves run those institutions - a truncation of attention-spans and an hysterical neophilia. The best word for it is infantilisation. Britain, and probably most other western countries as well, is regressing to a state of toddlerism, or at best arrested adolescence.

It's profoundly irritating, as a citizen, to be addressed by government ministers or TV news reporters like an educationally subnormal five-year-old. This election campaign has been depressing in its relentless concentration on the Pop Idol aesthetics of the leaders and the almost complete disregard of the huge fiscal challenges facing the next government. Most depressing of all is the thought that talking down to voters may actually work. Scott Chisholm advised Nick Clegg to imagine that his audience had an average age of ten, and look what happened to him. As to the black hole, a party promising savage cuts where its opponents offer only efficiency savings and more maternity leave is likely to lose a lot of votes; at least it's a risk politicians have good reasons for not wanting to take.

Is it merely a case of pas devant les enfants, though? Are politicians and broadcasters patronising the audience out of intellectual hauteur - because they think we're stupid - or because they themselves are as moronic as they imagine the public to be? Incidents like Popegate - which eerily resembles an episode of The Thick Of It - suggest that even the most intellectually accomplished and highly educated among us we are suffering from advanced brain-rot. We are indeed being ruled by idiots, even if the idiots concerned swank around with first class degrees from Balliol College Oxford.
Email Post
Labels: catholicism government Oxford University Politics Pope Popeweek 2010