The news that Alfie Meadows, the student who suffered a near-fatal brain injury during last December's central London protest, is to be charged (along with several others) with the serious crime of "violent disorder", has been greeted with predictable outrage on Twitter and elsewhere. It was my reaction, too, late last night. 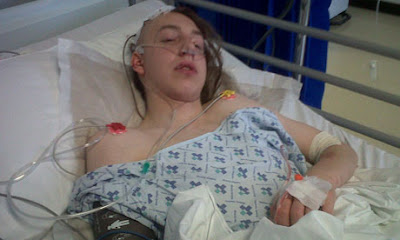 As everyone knows, Alfie was an entirely peaceful protester whose misfortune it was to have his skull smashed in by an out-of-control police officer, who has so far not even been identified, let alone held to account. To charge the victim with, essentially, the crime that was committed against him is, even by Met standards, more than usually crass and insensitive. It marks a new moral low both for the police and for the Crown Prosecution Service. It demonstrates contempt, not just for the protest movement (understandable, perhaps) but for basic human decency and compassion. It bespeaks an arrogant state apparatus drunk on its own impunity. It could almost be Syria.

To strike a topically Orwellian note, this chilling prosecution (it seemed to me) summons up a future of a boot stamping repeatedly on a human face - and then putting the face on trial for boot-obstruction.

I still think this, more or less, but four months since the above picture was taken there remains much that is elusive about the circumstances of Meadows' injury, to say nothing of his role in the protests. Today's decision to charge him, whether vindictive or misguided (or even defensible) doesn't shed much light upon what really happened that day.

As I said at the beginning, "everyone knows" what happened to Alfie, a 19 year old (at the time) described touchingly by a friend as "humble and witty". He doesn't look like a hooligan, and according to his mother he only became "radicalised" by the threatened closure of his university's philosophy department. One's sympathies must surely be engaged by anyone prepared to put his body on the line in defence of Schopenhauer and Kant. It is his mother, too, who is the only named source for the accepted account of events - that he was battered by a police truncheon in an unprovoked assault while attempting to leave a kettled area.

Susan Matthews (Alfie's mum) also asserted that the police tried to obstruct attempts to take him to hospital - a claim that turned out to be at the least problematic, and perhaps completely untrue. No mother wants to believe that her son was engaged in "violent disorder". And she was not present at the scene. Alfie himself has not commented publicly, nor has any video footage emerged that might settle the question. We do not yet have the full report of the Independent Police Complaints Authority - not that that will necessarily please everyone when it does.

In the absence of definite information, it strikes me that there are three possibilities:

1) Alfie was the victim of an act of unprovoked police aggression. His injury was a crime and his prosecution is a breathtakingly cynical gesture of official contempt for the life and liberty of the citizen.

2) Alfie was being violent and disorderly, and was hit over the head by an officer attempting to restrain him. The blow may have been (clearly was) excessive, but occurred "in the heat of battle" and the tragedy was, to some extent, of his own making.

3) Alfie was not hit by a police baton at all, but by a brick hurled from somewhere in the crowd by a violent protestor, aimed at the police. Inspector Gadget has claimed that there were rumours circulating in student circles late last year that Meadows was injured in a "friendly fire" incident. If this is true, his injury would of course be unconnected with any "violent disorder" he might or might not have been engaged in.

The third, most shocking possibiliy (at least to the many who naturally think the worst of the police), is also the least plausible, at least for the time being. Apart from Gadget's claim of student rumours (a rumour about a rumour) nothing has emerged to suggest that he wasn't struck by a police baton. This is surely significant. There have been no off-the-record whispers from highly-placed sources, as might be expected if there were any truth in the supposed rumours - not that such whispers would necessarily be reliable. The Metropolitan Police have an unfortunate track record when it comes to "confidentially" placing inaccurate information in the public domain.

Such considerations, when combined with the fact of prosecution, would tend to support the second theory. But that, of course, is precisely the impression the Met might be trying to achieve by prosecuting him. Already the charges have been seized upon in some quarters as "proof" that Alfie was not a peaceful protester. Yet - and this is what makes today's news especially shocking - there has hitherto been no discernible attempt to blacken Alfie Meadows' name, little or no suggestion that he was not as peaceful a protester as his mother claimed. The most charitable explanation is that the Met have finally learned the lessons of Jean Charles de Menezes and Ian Tomlinson. Even so, if there was evidence of misbehaviour one might have expected some confidential hints to have been dropped to sympathetic journalists.

But let's suppose he was indeed acting in a violent manner. Should the fact that he nearly died influence the decision whether or not to prosecute him? Legally, it makes no difference. Morally, and politically, it makes every difference. To drag him through the courts looks like an appalling abuse of power. Even if it isn't. Even if the proper procedures were duly followed. In an extreme (and thankfully rare) situation like this normal human decency ought to take precedence over rules, over setting examples or securing easy convictions (and getting charges against protesters to stick has always been easy). Some will object that he would therefore be "getting away with" violent disorder. But he had his head smashed in - that is hardly getting away with anything. And there were presumably more than eleven violent protesters that day. They, too, are getting away with it.

There undoubtedly was violence that day. But there are others who could have been charged - ten others are also up before the beak - without attracting such negative attention. If nothing else, the spectacle of Alfie Meadows in the dock will rebound on the Met in PR terms. It can only seriously undermine the genuine efforts they have made in recent months to evolve a more balanced approach to policing large demonstrations. Can they really not have grasped this? Could it even be that Meadows is being charged not despite, but because of his injuries - to send a message about police ruthlessness and amorality, about the impossiblilty of challenging them? It's not inconceivable; but I find myself reaching the even more worrying conclusion that they really are that stupid.

There was a thoughtful article by David Aaronovitch in the Times Saturday magazine the other week - a sentence I never thought I'd write - in which he reminisced about his youthful demonstrating in the 1970s. It was a time when demonstrators had

...a more robust attitude to policing. Essentially, if we were doing anything that we weren't supposed to be doing... we expected the fuzz to do something about it. Once, at a demo outside South Africa House, I found myself pushed to the front of a pushing crowd. Unaccountably the policeman in front of me, his arms linked to those of his colleagues, began to kick my legs hard with his big boots... it felt like his way of telling me that there was some price to be paid for all this.

Now I suppose I'd take his number, photograph him, write an online column for the Guardian and insist on an investigation. But we didn't take pictures, and there was no comeback. The standing joke was that you'd get charged with whatever they did to you. If they simply carted you off to make up the numbers, you'd be charged with obstruction, as I was. And if they hit you, you'd face a charge for assaulting a police officer.

The Metropolitan Police appear to believe they still live in such a world. Perhaps they're right.