Pastor Jones and the blame game 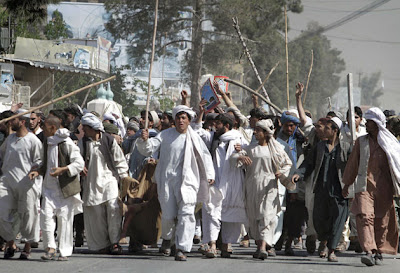 In understandable shock after the brutal murder of several of his staff in the Afghan town of Mazar-i-Sharif, the UN's chief envoy to Afghanistan, Staffan de Mistura has made a quite extraordinary statement. "I don't think we should be blaming any Afghan," Mr de Mistura said. "We should be blaming the person who produced the news - the one who burned the Koran. Freedom of speech does not mean freedom from offending culture, religion, traditions."

What peculiar logic. It was Afghans who murdered the UN officals, not Terry Jones. If you repeatedly poke a lion with a stick, until it goes on a rampage, then you may be held culpable for the fate of unconnected people it subsequently mauls. But a lion is not a moral agent with responsibility for its actions; it is a brute beast. By refusing to blame "any Afghan" - even those who wielded the knives and beheaded people who had no conceivable connection with Jones or his church - de Misura not only wrongly absolves the guilty, he condescends to them. He treats them as less than human; and he insults the millions of Afghans and other Muslims, deeply offended as they might be by Pastor Jones, who killed no-one on account of him.

It was certainly unwise and provocative of Terry Jones to burn a copy of the Koran, especially given that last year he promised not to do so. He may secretly have hoped to provoke a violent response, and thus been cavalier with other people's lives. After all, the riots that have occurred in Afghanistan and Pakistan serve only to confirm him in his belief that Islam is inherently a violent religion. But that does not make him morally responsible for a single death. One might as well blame the 9/11 hijackers, or the rioters against the Danish cartoons, without whose actions it would never have occurred to Mr Jones that the Koran was a book worth burning. By all means criticise the Koran-burning if you disapprove of it on grounds such as respect for religion or for the feelings of believers. But to condemn it on the grounds that it incites violence betrays severe moral confusion.

When you start apportioning blame for crimes to people other than those who perpetrate them, it quickly becomes complicated. Was it really Pastor Jones who "inflamed the Muslim world" with his theatrical Koran-burning stunt? Or was it the media, who reported it? Probably neither. Without the media, Jones's action would have gone unnoticed and would have inflamed no-one. Yet reporting of the event doesn't seem directly to have precipitated Friday's events. In contrast with the circus that surrounded Jones's aborted Koran-burning last September, his bonfire this time received surprisingly little coverage. Jones burned the Koran on March 20th, yet the first time most people (including me) heard about the incident was a full twelve days later when the mob in Masar-i-Sharif went on its murderous rampage.

Clearly, the crowd had heard the news. But who told them? Presumably it was the preacher who denounced Jones's sacrilege in the local mosque. He was certainly guilty of incitement even if he didn't personally wield a gun or a knife. But that preacher wouldn't have done so had President Hamid Karzai not chosen - for his own political purposes - to make Jones an issue. The New York Times reports:

Both Afghan and international news media had initially played down or ignored the actions of Mr. Jones, the Florida pastor. On Thursday, however, President Karzai made a speech and issued statements condemning the Koran burning and calling for the arrest of Mr. Jones for his actions. On Friday, that theme was picked up in mosques throughout Afghanistan.

“Karzai brought this issue back to life, and he has to take some responsibility for starting this up,” said a prominent Afghan businessman, who spoke on the condition of anonymity for fear of retribution if he was identified as a critic of the president.

Karzai, familiar as he is with the emotional tenor of some of his people, must surely have known that by condemning a Koran-burning of which most Afghans were unaware he was playing with fire. Was it his fault, then? The causal link is stronger; but again, no. The tragedy in Mazar-i-Sharif has been followed by rioting in Kandahar during which at least a dozen people have been killed. Yet - the NYT also notes - in other parts of Afghanistan the demonstrations have (so far) been small-scale and largely peaceful. So the mere act of burning a Koran, nor the act of reporting it, nor even the act of loudly denouncing it, cannot be said to cause riots or murders. And is not the fault of Islam. Such events occur when several factors come together in a largely unpredicable way, and are usually connected with local politics and personalities on the ground. Ultimately, though, only those who actually carry out monstrous acts or urge others to do so have blood on their hands.

UPDATE: On the Guardian website, Martin Robbins also wonders about the causality of the UN massacre and wonders if the media is as "responsible" as Pastor Jones. He also brings up the case of Raoul Moat, asking if the intensive press coverage during his six-day spree egged him on. I have a different thought. There was, notoriously, widespread sympathy expressed for Moat, especially on the internet, by people who preferred to blame his girlfriend for "betraying" him. As though she was somehow responsible for the cold-blooded murder of her new boyfriend and the random shooting of a police officer. It's strange how strong the desire to blame someone other than the criminal can sometimes be.
Email Post
Labels: Afghanistan Islam Koran burning religion respect