Was the "gay caveman" actually gay? Or even a caveman? 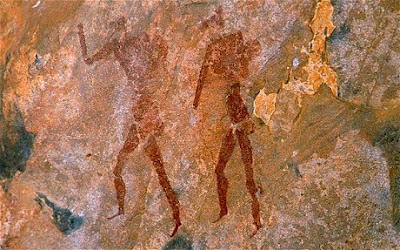 The "first known gay caveman" has been unearthed in Prague, apparently. The Mail is only one of several newspapers excited by the news.

How can they possibly know? The answer is depressingly stereotypical. The man was apparently buried in the attitude, and with the accoutrements, traditionally ascribed to women - not with weapons of war but with pots and pans. Therefore, say an archaeologist, he was "probably" gay or transsexual.

"She added that Siberian shamans, or latter-day witch doctors, were also buried in this way but with richer funeral accessories to appropriate to their elevated position in society."

Well perhaps. But - assuming that the male identification of the skeleton is confirmed rather than merely probable - perhaps he was a potter (whether or not a Stone Age equivalent of the cross-dressing heterosexual Grayson Perry), or the village chef. Perhaps burying the man in the attitude of a woman was a form of ritual humiliation because he had displayed cowardice in battle. Or perhaps he was a shaman. It seems strange to rule out this possibility on the grounds that in much more recent times, in a different part of the world, shamans were buried with "richer funeral accessories". Then again, the burial might have been carried out in accordance with magical practices whose purpose is quite lost to us. We just don't - and cannot - know.

Unfortunately there's no reference made to any academic paper or even to a more formal report of the announcement, so I'm unable to discover how reliably the sex of the skeleton had been determined or how large a sample of gender-specific burials from this period the new find violates. The original report - from which today's have largely been cut and pasted - seems to be this one from a Czech news site, which appears under the incredibly offensive heading "Grave of Stone Age gender-bender excavated in Prague". It contains few further facts, however. (For an expert sceptical analysis see Rosemary Joyce.)

The find is clearly unusual, but why are the archaeologists so keen to interpret it in the light of 21st century notions of sexual identity and orientation? And rather crude notions at that. Notice the elision - made by the archaeologists as well as in the churnalised press reports - between homosexuality, transsexuality and transvestism, as if being gay were the same thing as being feminised. There's no inevitable connection between effeminacy or cross-dressing and same-sex relationships, however. In many cultures, homosexual practices have occurred in a context of heightened masculinity (Sparta, various armies, English public schools). Today, of course, the whole area of sexual identity is highly political - there are already signs that the Prague burial may become the object of a tug-of-love between gay and transsexual activists.

That's not the only stereotype doing the rounds in these reports. The grave is late Neolithic, dating to around 2,500-3000 BC - which means that the person buried, whatever his sexuality, wasn't any sort of "caveman". That doesn't stop the Telegraph illustrating the story with some completely unrelated cave art, reproduced above, which the compositor may have decided looked a bit gay. What's going on here? Presumably, at some level, a contrast is being drawn between the cultural personas of a brutish, club-wielding (and thus stereotypically hetero) "caveman" and that of a mincing, cross-dressing, Judy Garland-loving queer. Thus "gay caveman" makes for a satisfying oxymoron, even though the body in the burial pit was certainly not a caveman and there's no real evidence he was gay.

The reporting of this story, and perhaps the presentation of it by the archaeologists, says rather more about our society than about the one in which this person lived and died.
Email Post
Labels: archaeology culture history sexuality