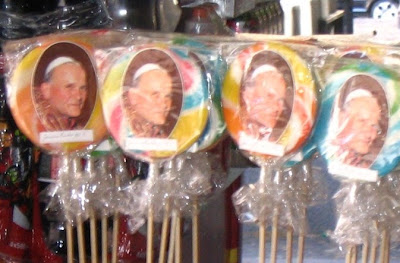 An interesting tidbit about differing pontifical styles in yesterday's Times, which had a piece on preparations for the forthcoming (and laughably rushed) beatification of Pope John Paul II. It comes from a Vatican insider who preferred to remain anonymous:

In 27 years he [JPII] didn't change a nail in his personal apartment. Ratzinger had it completely refitted with German kitchen equipment and electronic devices everywhere.

This is presented as evidence of JPII's superior personal sanctity - the report says that this "trumped his weaknesses as governor of the church". Others might see the state of the apartments as a metaphor for stagnation and rot in the institution more generally. The vignette does reveal that the present pontiff has been, at least as regards his personal living space, a radical moderniser. He has also moved to copyright the papal image, so we're unlikely to be seeing many Benedict lollipops.

It could be that, coming from Communist Poland, Wojtyla found the papal apartments splendid rather than antiquated, and Ratzinger simply had higher expectations. I've heard a similar story about Clarence House - the Queen Mother (no ascetic herself) declined to alter it in decades and left the place delapidated and unsafe. Prince Charles spent £4.5 million of public money having it refurbished before he moved in. On the other hand, John Paul II strikes me as the type who, in the Middle Ages, would have worn a hair-shirt, while Benedict XVI, in the Renaissance, would probably have hired Raphael to paint his bedroom. They would both have enjoyed burning heretics, however.
Email Post
Labels: catholicism Pope religion