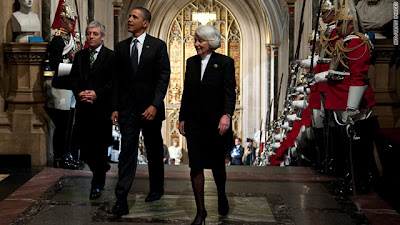 Peter Oborne finds all the fawning over Barack Obama from our leaders earlier this week rather nauseating.

It was like teenagers surrounding a pop star, but with very much less excuse: grown men and women, with a long record in public life behind them, abandoned all judgment and propriety.

The face of John Bercow as Obama spoke was a picture: like many other members of the audience (apart from Ken Clarke, who fell asleep) he appeared to be undergoing a profound, mystical experience.

I tend to agree. Oborne puts it down to "a collective act of naked power worship". I don't think the response to George W Bush was ever quite so swooning, however - except from Tony Blair. It's the president's charisma, and the undimmed popularity which he continues to enjoy outside the United States itself, that our own more tarnished politicians want a piece of. They hope the magic will rub off on them.

Oborne's more serious point concerns the Americanisation of British politics - shown for example in the creation of a Supreme Court, the transformation of the prime minister's principal private secretary into a "chief of staff", and proposals for the House of Lords to be replaced by a Senate. "We are losing faith in our institutions," he laments. At the same time he wonders if the US really a model to be emulated. From unpaid congestion charges in London to the legal abomination that is Guantanamo Bay, Obama's White House remains as internationally lawless as it was under Bush.

detected very little sense that Britain is a proud, independent nation with a distinct sense of our own values and traditions, many of which are very sharply different and, in some cases, contradictory to America’s.

Obama's Westminster speech - which Oborne thinks "over-hyped" (and it certainly wasn't one of his best) - attempted to flatter its audience by laying out a Churchillian view of history in which early gains for liberty in Britain were exported first to America and is now in the process of transforming the world. Partly he was making a case for continued American leadership in a world economically dominated by China and other emerging economies, partly he was flattering his hosts. Obama stressed repeatedly the "values and beliefs" that the two countries supposedly have in common: "our free market tradition, fortified by our commitment to basic security for our citizens"; "values of tolerance and self-determination that lead to peace and dignity"; "the rights of individuals".

He began by saying this:

The reason for this close friendship doesn't just have to do with our shared history and heritage; our ties of language and culture; or even the strong partnership between our governments. Our relationship is special because of the values and beliefs that have united our people through the ages.

I suspect that the opposite is, in fact, true. It is the shared history, the language and culture and the diplomatic relationship between the governments (i.e. the perennial British need to feel relevant in Washington) that bind the countries together. The values and beliefs can be strikingly different. Take, for example, this jarring passage from later in the speech:

Unlike most countries in the world, we do not define citizenship based on race or ethnicity. Being American or British is not about belonging to a certain group; it's about believing in a certain set of ideals -- the rights of individuals and the rule of law. That is why we hold incredible diversity within our borders. That is why there are people around the world right now who believe that if they come to America, and work hard, they can pledge allegiance to our flag, and call themselves American. And there are people who believe that if they come to England to make a new life for themselves, they can sing God Save the Queen just like any other citizen.

This is the American ideal, certainly. And - partly as a result of the mass immigration of the past few decades - it has become fashionable to think of it as the British ideal too. Is it, though?

I don't remember the last time I sang God Save the Queen, but I must have been very young. Citizenship may not be based on race or ethnicity, but it is now based on descent. Before 1982 British citizen was conferred automatically by birth in Britain, whatever the status of one's parents. This is no longer the case. More relevantly, before Gordon Brown started emoting about "British values" as part of his campaign to frustrate Scottish independence - or perhaps it was terrorism and the need to do something about all those scary young men in Dewsbury and Luton - it was possible for a sensible, law-abiding Englishperson to go through life without hearing any mention of "British values". Expcept possibly as part of the catchphrase "No sex please, we're British."

American values are freedom, the Constitution, the right to bear arms, pledging allegiance to the flag. One nation under God. E pluribus unum. British values are a nice cup of tea, warm beer, fish and chips, royal weddings, the NHS and, yes, no sex (or sniggering about sex, at any rate). The idea that the nation can be summed up in slogans may have some relevance in France (Liberté! Égalité! Fraternité) but it's historically alien to British sensibilities. The British empire was never about spreading peace and democracy, not really. It was about trade, self-enrichment, finding somewhere to export the underclass (and the Irish) and, to a small extent, Christianity.

The American response to mass immigration was the Melting Pot, with its intense civic nationalism and flag-worship. "American" is a morally loaded adjective, not a neutral descriptor - the United States has always been an ideal as well as a nation. And the British response? Before it became fashionable to encapsulate "Britishness" in a series of abstract nouns (democracy, fairness, justice etc) that ought to apply to anyone anywhere we had multiculturalism. Multiculturalism, of course, has had a bad press recently, partly because it has seemed divisive, partly because of the endless opportunities it has given pressure groups, bureaucrats and self-styled community leaders to enrich themselves. But it probably owes more than is generally supposed to a very traditional British desire not to impose culture from the top down.

Churchill had a war to fight, and he had a sentimental attachment to the United States through his mother, so he could be forgiven for taking the Anglo-American relationship too seriously. But he's responsible for a lot of transatlantic misunderstanding, wishful-thinking and guff we have suffered from ever since.

It's now almost 250 years since the two countries went their separate ways. Before the Second World War, Britain and the USA were not particularly close diplomatically. They were imperial rivals that had several times been on the verge of war and economic rivals competing aggressively for market share. For Americans of Bristish or Irish descent, the United Kingdom was what they, their parents or grandparents had come to the United States to get away from. American presidents throughout the 19th century viewed British leaders and their intentions with deep suspicion and anti-British rhetoric as an easy way of gaining votes.

To the extent that he does "undervalue" the Special Relationship, Barack Obama represents a return to this historic pattern. Except that earlier presidents would have seen very little advantage in being photographed paying court to the Queen.
Email Post
Labels: Obama Politics US politics