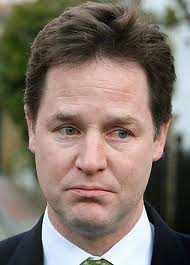 Nick Clegg has not been looking happy lately. Yet in the Telegraph, Ed West hails him as the most successful Liberal politician since Lloyd George. He points out - as does Tim Montgomerie - that the Lib Dems seem to have been able to implement more of their manifesto commitments than the Tories. An amazing 75% of their agenda has to some extent become government policy, against just 60% of Conservative pledges. Given the relative size of the two parties both at Westminster and (even before the Lib Dems' recent collapse in the local elections) in the country, this is quite a remarkable achievement. An impartial observer might even think that Clegg had David Cameron over a barrel and was using his small but decisive Commons troops to exert a disproportionate influence over the shape of government policy.

If true, this ought to make Nick Clegg the object of envy and wonder, the darling of his party and possessor of an aura of political potency rivalling that of Tony Blair in his late 90s pomp. Instead, he cuts a pitiful figure, reviled by "progressive" opinion, hanged in effigy by the very people who cheered him to the rafters a mere twelve months ago, increasingly unloved by the rank and file of his own party. He is widely seen as a busted flush, and his party as an impotent appendage of the resurgent ranks of Conservatism. If Cameron is Flashman, Clegg is his fag.

In a speech today, Clegg even appears to have accepted the truth of this caricature - saying, for example, that the Lib Dems must be more distinctive, their voice louder and more independent, that they must come out of the Tories' "shadow". In future, the Coalition will become less symbiotic and more fractured. The price of the Coalition's survival may be the loss of its public image as a truly joint enterprise. The Lib Dems will be happier, and so will many Conservatives. But where will this leave the Liberal impression on government?

If West and Montgomerie are right - and many senior Lib Dems also insist on their success in translating their manifesto commitments into reality - then we're faced with a paradox. Nick Clegg appears like a failure, yet in reality he is a stonking success. His party appears to have been smothered by the Tories while his policies have regularly prevailed over theirs. Practical success has been bought, perhaps, at the cost of political eclipse - an eclipse that threatens to become something close to extinction if present trends continue.

What, then, will the new, assertive, semi-detached Lib Dem ministers achieve? Will a Conservative party so readily embrace policies calculated to please a partner which treats it as radioactive? It seems unlikely. If Lib Dem policy success has come at the price of political failure - if it had depended on hard work behind the scenes and a public facade of inter-party harmony - then a more assertive Clegg may well be a less effective political operator. He may save his leadership at the expense of ceasing to exercise it.

I hope not. I like Nick Clegg. He's a decent man and an asset to his country. Sadly for him, he was fated to lead the Liberal Democrats.
Email Post
Labels: Con/Lib coalition Lib Dems Politics