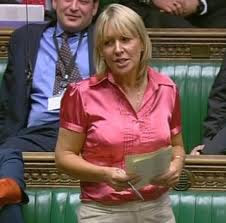 Nadine Dorries in trouble on Twitter again, this time with a ten-minute rule bill calling for teenage girls to be given extra abstinence-focused sex education in schools. She writes that her bill is "about making boys wait being an empowering and cool thing for girls to do and that it should be taught as a viable, if not preferable option for girls aged 16 and under – especially as sex at that age is unlawful." But the general consensus of outraged Tweeters was well summed up by Cath Elliott when news of the motion's success came through at lunchtime: "the idiots have it".

Dorries has an uncanny knack for outraging a certain sort of left-liberal personality, especially feminists, whose language about her often veers close to what an outsider might consider sexist. It may have something to do with her being blonde.

More thoughtful critics look at her professed aim - reducing the number of teenage pregnancies - and point out that in places where it has been tried (some US states, especially) abstinence education has rarely succeeded. The sight of Bristol Palin, whose teenage pregnancy seems only to have facilitated her emergence as a semi-independent TV celebrity, beating the drum for virginity sums up for many the inherent nonsense of the whole idea. But then, as Dorries ripostes, the current situation, in which "girls as young as seven are taught about intercourse, safe sex, how to apply a condom on a banana, where to get condoms, how to detect an STI and that they don’t need to tell their parents anything" has failed to stop Britain having the highest level of teenage pregnancy in Europe. So why not try something different?

The Dorries plan (which has no chance of becoming law, needless to say) can usefully be separated into two ideas: that sex education should be gender-specific, to the extent of girls being given separate lessons; and that teaching abstinence, at least to girls, is a good idea. Abstinence is certainly a good idea for teenagers: sex is an unnecessary distraction from schoolwork, most of the time. Whether teaching it works is more contentious. I seriously doubt that any form of sex-education really "works", in the sense of altering behaviour. It reflects society more than moulding it; sex education appears more effective in (for example) the Netherlands because the Dutch are just less weird about sex than the British (or the Americans), not because the lessons themselves are any better.

But perhaps that's not the point. State-mandated sex education is about politics rather than biology, and Dorries' support for abstinence education is of a piece with her opposition to the commercial "sexualisation" of childhood. Especially as it applies to girls, of course. The strange thing is that Dorries and her opponents share many assumptions. The Right might complain about "sexualisation" and the Left about "objectification" (of women), but both posit wider society as the problem and a particular form of sex education as the solution. Strikingly, Dorries devoted part of her speech today to the ritual denunciation of Primark and its notorious "padded bikinis" aimed at under-tens, previously the target of David Cameron's ire, but also singled out for criticism by Channel 4's ultra-liberal Sex Education Show.

In her speech, Nadine Dorries quoted approvingly an article written by Joan Bakewell, in which the veteran broadcaster recanted her earlier opposition to Mary Whitehouse's 1960s campaign to clean up television. Bakewell "has now changed her mind in terms of her opposition," claimed Dorries, "saying that the freedom granted by the introduction of the pill has been abused, resulting in the sexualisation of young girls and the prevalence of pornography." Joan Bakewell is now a grandmother, which might possibly have some bearing on her change of attitude, but the citation does illustrate the striking convergence of religious conservatives and secular feminists in the area of sexuality. (Perhaps a subconscious awareness of this fuels some of the hatred towards Nadine Dorries?)

The main difference would seem to be that while Dorries' opponents promote explicit sex-education as the answer to Primark-style sexualisation or internet porn (or just boys), for Dorries they are part of the same phenomenon. But while Dorries' opponents are busy denouncing her for reinforcing an antiquated idea of acceptable female behaviour, their antidote to "blaming" women usually turns out to be blaming men. When it comes to the politicisation of gender, the world view of the Guardian and the Daily Mail can be surprisingly close. And of course the most prominent voices on both sides of the debate are female.

Which brings me on to the gender question.

How would segregated sex-ed work in practice? If the girls are off in one room being taught to cross their legs and "just say no", what will the boys be learning? To keep it in their pants? Or that if she still puts out, even after all that state-mandated abstinence education, then she must be a real slapper, so go for it? Perhaps neither: Dorries' motion provides only for "certain additional sex education to girls aged between 13 and 16"; it says nothing about boys, who might well be off playing football or tinkering with car engines or doing something else stereotypically masculine. Sex, you see, is basically a female thing.

In the Commons, Dorries repeatedly elided the categories of "children" and "girls":

One factor constantly ignored by society is that peer pressure is a key contributor to early sexualised activity among the children of our country. Society is focused on sex. Our sex education teaches children how to have sex, not how to say no to sex. We ignore at our peril the fact that many girls feel pressurised into having intercourse when they are far too young, when what they actually need is their childhood.... We need to let young girls know that to say no to sex when they are under pressure is a cool thing to do; it is as cool as learning how to apply a condom. It is as important as all the other issues that they are taught in sex education. It has to be taught alongside everything else so that young girls can say, “I have been told to say no.”

This is dangerous ground, ideologically, not least because of the implication that sex (and its consequences, such as preganancy and disease) is something that boys do to girls, and at the same time something that it is the responsibility of girls whether or not it happens. On the one hand, it risks reintroducing the old double standard, in which good girls say no and bad girls deserve everything that happens to them (including rape, unwanted pregnancy, disease and of course the shame). We're already within ten paces of putting young women in burkhas, for their own safety. On the other hand, what sort of message is being sent out to boys here? That they can't help themselves being testosterone-fuelled savages, so they shouldn't even try? That there aren't equally strong pressures on boys to engage in (possibly premature) sexual activity? The pressure might be coming from their peer group or from online porn rather than from their (assumed to be female) partner but it's at least as strong.

At least girls, to some extent, are "allowed" to be virgins in our society without being made to feel like failures. Boys have no such freedom. Their sexual agency (assuming that they are heterosexual) is contracted out to their girlfriends, whose responsibility - or privilege - it is to grant or withold sex. The cultural roots of this go very deep - basically, female virginity has been conceptualised as a possession which a woman loses and a man takes from her (or she bestows on him as gift). Male inexperience, on the other hand, is essentially an absence, a lack that must be made good. The consequences of this mindset are terrible, ranging from misery and feelings of inadequacy among sexually unsuccessful boys through to misogyny (blaming and resenting girls for not giving them what they "need") and in some cases sexual harassment or even rape.

I recently spoke to a 16-year-old who used these very disturbing words: “The thing is, if you reach the age of 18 and you’re still a virgin, and you meet somebody you’d like to be your boyfriend, he’s going to think you’re a freak.” It never enters the minds of young teenage girls, who are taught in sex education classes about “safe sex” and about making their decisions on whether to have sex based on how they feel that day or on their wishes—“feelings” and “wishes” are the key words—that they are empowered and have the ability to say no. That is not taught alongside information on making the decision based on their feelings and wishes and on “safe sex”, but it should be an equally viable option.

Being 18 years old and a virgin is considerably more embarrassing to a boy than to a girl, though, who would more likely be able to thrill her partner with the revelation that she had been "saving herself" for him. But would Dorries tell a boy that it was "empowering" or "cool" to say no to sex? Would anyone?

It's possible to argue that, at least when it comes to pregnancy, the consequences of premature sexual activity impinge more heavily on girls than boys - certainly in terms of the impact on their education and their future career prospects of motherhood, and also in the emotional impact of abortion if they choose that course. If the aim of sex education is (as we're often told) primarily to reduce the teenage pregnancy statistics then it may make sense to concentrate on the female half of the species. But herein lies a paradox: precisely because the possible consequences of sex are so much greater (and more obvious) for girls than for boys, Dorries-style abstinence education would be better targeted at boys. It is boys, after all, who most need to be convinced that there can be a downside to sex.