Voting reform and the failure of metaphor

A few days ago a leaflet from the ‘No to AV’ campaign dropped through my letterbox, as I’m sure it did to many of you. It contained the following image: 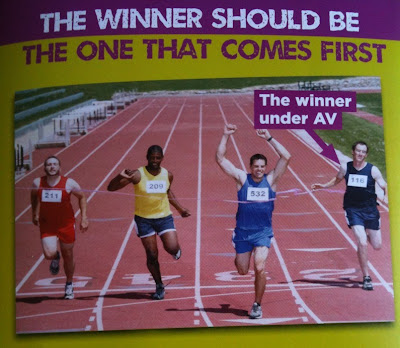 I’ve been a long-term supporter of the Liberal Party and its sundry successors and have a bias in favour of electoral reform, but I’m a sceptic by nature and often find myself persuaded to conclusions which don’t immediately sit easily with other positions I take, so it was by no means a foregone conclusion that I’d vote Yes in the AV/FPTP referendum. The message of this image is very simple and impressive. It, and others from the No campaign, convey very effectively the point that AV is ‘unfair’ because the person who comes first doesn’t necessarily win. We all want to be fair, after all. I do, anyway, and I’m sure you do too.

But I am also interested in the categories in which people think and the metaphors they use. The ‘race’ metaphor for an election has become a very natural one, which political parties and the media use ad nauseam. However, it’s a very misleading image; an election campaign is not actually like a race at all. In a race, the relationship between effort and ability on the one hand and reward on the other is very clear: you run faster than everyone else, you come first. Of course there may be other factors that contribute towards you running faster than everyone else, but during the race itself everyone works under the same conditions, opportunities and constraints. The test of quality is completely objective, and how well an athlete does is, all things being equal, under his or her own control.

This is not how an election works. For the metaphor to be accurate, the athletes would not run at all, but just stay where they are and argue why they should win the race, whereupon the crowd at the arena would vote on who they thought should win. An election is, patently, not a reward for effort and ability; the person who ‘competes best’ is not necessarily the one who wins. Comparing gaining more votes than anyone else with the objective achievement of running faster than anyone else is not a true comparison. In an election, it’s not your ability which brings victory, but the opinion of other people which includes all sorts of entirely arbitrary, or at least unpredictable, elements.

The ‘Yes to AV’ campaign have an equally powerful metaphor on their side, that of the ‘Wasted Vote’. Nearly six MPs in ten are supported by fewer than half their electorates; everyone who hasn’t voted for the winning candidate, or at least the ones who have voted for candidates other than the top two in any constituency, has effectively had their vote thrown away for them. This is a simple, strong image too, which creates its own impression of injustice, of things not being ‘fair’.

But what is a vote? It’s an expression of a person’s opinion on a particular matter, delivered at a particular time. It is an event, rather than a thing. Yet the metaphor of the ‘wasted vote’ treats it as though it were a thing, something that can be ‘thrown away’ when, treated differently under a different system, it could be more effectual. I suspect we have come to think in this way because in our electoral practice we have got used to casting our votes via little bits of paper, which capture our expression of opinion and so convert it from something entirely mental into something physical. I think of the old Liberal marching song from the early 1900s, ‘The Land’, which asked ‘Why should we be beggars with the ballot in our hand?’ The ballot, the thing you actually mark and pop in a box to be counted, has by metaphorical slippage become the vote, the opinion it represents. It’s those ‘votes’ which are ‘wasted’ or ‘not wasted’, not actually the expression of opinion they embody. It’s difficult to see how an expression of opinion can be ‘wasted’; it’s made, and that’s it.

I draw no special conclusion from this; and if I had any doubts about voting Yes on Thursday they were finally dispelled by listening to John Reid gabbling incomprehensible nonsense about chocolate bars on the Today programme yesterday morning. But considering the images which express and affect the way people think helps us to see how these sorts of debates so often become a dialogue of the deaf.
Email Post
Labels: AV Referendum elections guest post Lib Dems Politics