Have I Got News For You, Greg 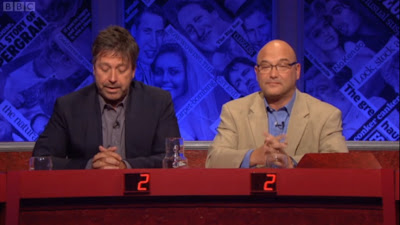 If you saw last night's Have I Got News For You, you may have noticed that co-host Greg Wallace (on the right) looked slightly uncomfortable during the inevitable discussion of Max Mosley's latest legal battle at the European Court of Human Rights. Nothing was said - at least, not in the edited broadcast version - but no superinjunction forbids me from revealing that Wallace is no stranger himself to the world of sadomasochism and spanking.

Wallace seems to have taken the story - which included allegations of affairs and regular use of prostitutes - in relatively good part. A spokesman quoted at the bottom described the failed marriage as "well and truly in the past". But the disclosures, especially the infidelity, were embarrassing and none of the story can be said to have been in the public interest (or even, it must be said, particularly interesting to the public). Almost anything involving sex now attracts s8 protection as being subject to "a reasonable expectation of privacy". Had Greg Wallace got wind of his ex-wife's intention to speak to the Screws he would almost certainly have been granted an injunction, as was another prominent media personality whose ex-wife was recently gagged from describing their life together. Had Max Mosley been successful at Strasbourg he would have had a right to be informed. It is not unreasonable to speculate that such a thought passed through his mind during the show.

Incidentally, given the tradition on HIGNFY of Ian Hislop and Paul Merton ambushing their guest hosts with tawdry incidents from their pasts, the absence of any allusion last night to Wallace's private passion is slightly surprising. Why have him on - this week of all weeks - if not to administer the show's trademark version of retributive justice? Perhaps there was some prior agreement, but I'd love to have been a fly on the wall in the editing suite.

Two points. First, despite the unsavoury nature of some of his indiscretions - Denise described an occasion on which he arrived home "drunk and dishevelled" at 4 am one morning and announced "I've been with a prostitute" - Greg Wallace's career was not significantly disrupted by the News of the World story. Perhaps it was not entirely out of keeping with his laddish public persona. The same might well be true of many of the footballers who have been queuing outside Mr Justice Tugendhat's chamber door. Of course, potential career damage itself is not a consideration of privacy law - the point is that sex is private - but tabloid apologists frequently claim that celebrities depend on a public image whose hypocrisies they wish to expose, while the celebrities probably do fear for their careers.

Second, why should someone in Denise's position - a betrayed ex-partner - not have the right to tell intimate details of her own life simply because it touches on someone else's "privacy"? Presumably she did it for money - the NOTW mentions that she is "living in a two-bed flat and working at Tesco for £180 a month" - but why should she not be entitled to get some financial return for her years of marital unhappiness? It seems to be established law now that sex is inherently private and thus entitled to protection, and there are certainly very strong arguments against third party intrusion like that to which Max Mosley was subjected. But while private, sex is not (preferably) a solitary activity. It is shared with at least one other person, and it questionable on what basis the law can impose a duty of silence on someone regarding their own private life simply because it necessarily trespasses upon the private life of someone else. It has certainly never been properly debated ("freedom of expression" being mainly used as a euphemism for freedom of the press).

To talk openly about such matters might be considered tasteless or even immoral (althought the confessional culture we now live in has made it much less shocking that it used to be). But to make it effectively illegal - at least where an ex-partner objects - is to impose a much greater burden than social opprobrium on those who would kiss and tell. I've no sympathy for the sleazy culture of the News of the World and its notion of "news", but this aspect does worry me.