There's no evidence he actually made a pass at the first lady. Just this photo of him in which he seems to have his tongue hanging out. 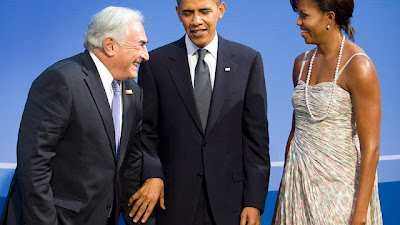 What no-one denies - supporters or detractors alike - is that Dominique Strauss-Kahn is a man of gargantuan sexual appetites, the sort of man who walks around with a semi-permanent erection, or a permanent semi-erection, and can't see a woman without making a pass at her. But of course that doesn't make him a rapist, and several women who have enjoyed his attentions have come forward to defend him. "He likes sex. So what?" asks one former mistress, a Spanish writer. "He is not a primitive, cruel, sadistic man, violence is not part of his make-up."

Similarly impressed was the porn-star, codename Natasha Kiss (the Mail, as usual, enjoyed the opportunity this gave them to splash pictures of the pouting brunette over several pages). "Dominique does not need to rape a woman," she said. "He is just a libertine. I know men. He is not violent... I still remember his cuddles."

But against this there are accounts like that of Tristane Banon, who went to interview DSK at the age of 22 year old journalist went to interview him and, she later claimed, narrowly avoided being raped. She compared him to "a rutting chimpanzee". Or the New York madam, whose escorts repeatedly came back complaining of his aggressive behaviour. Or the politician who complained about being groped. Or the suggestion that Air France, and the IMF itself, had a policy of not leaving him alone with female staff. Or the economist who worked at the IMF and "felt coerced into sleeping with him because of his senior position and aggressive advances."

When the DSK scandal erupted, some were quick to point to cultural differences between unreconstructed French libidinism (protected, perhaps, by strict laws of privacy) and Anglo-American prudery and puritanism; or to conflate the accusation of attempted rape with other conspicuously straying alpha males such as Arnold Schwarzenegger, or the dozen top footballers currently sheltering behind injunctions. Because, as everyone knows, money and success often go along with rampant priapism.

Not all powerful, charismatic men are sexually incontinent. Tony Blair isn't, nor by all accounts are Barack Obama or David Cameron or Sir Alex Ferguson (to name one of the few prominent figures in the world of football who hasn't felt the need to take out a superinjunction). And while I come to think of it, the tragedy of Ryan Giggs is that here is someone for whom a dalliance with a reality TV star seems to have been out of character. But plenty are. The list is long and notorious: Lloyd George, JFK, Bill Clinton, Berlusconi. It might be that men in positions of power have more opportunity. It might be that they have more testosterone. It might be a sense of entitlement. Or a propensity for risk-taking. Sexual voracity might be a consequence of, or a driver of, these men's success. But however you explain it, few would deny the correlation.

When Strauss-Kahn is discussed in this company, an objection is not far behind. The difference between these men's behaviour and that of the former IMF chairman, after all, is that DSK is accused of sexual assault, near-rape, of repeated sexual harassment. He's accused of treating women habitually as his personal sex toys. Whether they welcome his attentions (and some do) or not. He isn't on trial in New York for having consensual sex with women who are not his wife.

It's about consent, in short. His accusers point to a pattern of behaviour that appears to show repeated abuse of women. His defenders point out that he had no need to assault women, because his Don Juanism never lacked willing accomplices. But this misses the point. Indeed, one of the things the sorry story of Dominique Strauss-Kahn shows up (or ought to) is the simplistic way in which sexual crimes are - for political reasons - so often conceptualised.

Consent makes the difference between permissible sexual intercourse and rape. Violent sex can be consensual. Non-violent sex - if the victim is drugged or asleep - can be rape. This is true legally, morally and from the point of view of the victim. For the rapist, however - that is, the erotically-driven rapist - the presence or absence of consent may be of very little significance. He is jumping on her - or trying to - despite her lack of consent, not because of it. What matters is achieving copulatory consummation, possessing the woman, getting his end away.

The stress on consent may be morally correct, but it does little to account for the behaviour itself. Worse, it tends to go along with a feminist theory of rape that sees the crime as an expression not of sex but of power and misogyny. The rapist violates women, the claim goes, because he hates women, because he has "issues" of anger and resentment against women, because the patriarchy has given him the impression that he enjoys (or ought to enjoy) power over women's bodies. Not because he wants sex. "Rape is not about sex" - or, according to some, is not sex at all.

It's unlikely that a man who behaves like Dominique Strauss-Kahn is alleged to have behaved in that New York hotel room sees it quite that way, however. Perhaps such a man assumes that every woman he meets will want to sleep with him, because so many have in the past. Perhaps at some level the risk of exposure - of embarrassment or worse - adds to the thrill. But it's probably a lot more basic than that. Here's someone of great intelligence, of education and sensitivity, in other areas a paragon of rationality and self-control (to be a successful politician, you have to be) in thrall to an overwhelming, unstoppable, but transient, biological urge. He just can't help himself.

It's no excuse. It isn't even an explanation. Perhaps it just is.
Email Post
Labels: Crime sexuality