Karen Armstrong and the death of paganism

Karen Armstrong was up to her usual tricks on Start the Week yesterday, combining historical inaccuracy with the sort of passionate intensity that brooks no contradiction. She warned modern Christians not to be so "dogmatic" as to actually believe things, something she described in her postmodernist way as a "peculiar modern Western Christian development". Asked by Andrew Marr whether churches and other religious institutions (which he thought were "struggling") had any future, she told him:

They will struggle if they can't adapt. When faith traditions cease to be able to adapt to their current conditions, they die. That's what happened to the old paganism.

The old paganism didn't wither because it failed to adapt, as Armstrong knows perfectly well. It was destroyed. It was consciously and deliberately persecuted out of existence. Within a few of generations of Constantine's conversion to Christianity another Roman emperor, Theodosius I, acting under the influence of a Milanese fanatic later known as St Ambrose, made the practice of the empire's traditional religion illegal. Temples were closed, soothsaying was outlawed on pain of death, the Oracle of Delphi was shut down, the Olympic Games were cancelled after more than a thousand years of quadrennial celebration, Plato's Academy in Athens was forced to close its doors (many of its leading lights fleeing to sanctuary in Persia), the Vestal Virgins were forcibly married off. He then went one further and issued decree prohibiting any pagan worship even within the privacy of people's own homes. His policy was one of religious totalitarianism. 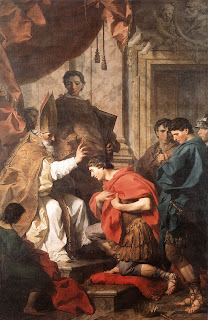 Before Theodosius got to work in 381 AD, Classical paganism was very far from being dead. Over half the population of Rome was still pagan, as were large parts of the empire. And it had adapted, considerably, to survive. The Neoplatonism espoused by the pagan intellectuals of late Antiquity was a very different phenomenon from the worship of gods in the Homeric age, from the cults of Republican Rome, or from the myriad of mystery religions and popular shrines that flourished for centuries around the ancient Mediterranean. Christianity and paganism weren't simply rivals, either: they borrowed from each other, Christianity taking over certain pagan festivals and official paganism imitating Christian organisational structures and priestly hierarchies.

There was no inevitability about the death of Classical paganism. Its equivalent in India survived and flourishes still in the guise of Hinduism. Modern Hinduism is more theologically and philosophically sophisticated than most ancient paganism, of course; but then it has had a great deal longer to become so. And many of the old cults still survive. They answer, as Classical paganism answered, the needs of ordinary people in their millions. Had India ever had a Theodosius, intent upon suppressing the Hindu religion and replacing it with Christianity or (more likely) Islam, he might very well have succeeded. Instead, the country enjoyed rulers like Ashoka, a liberal-minded Buddhist, Akbar the Great, who enjoyed listening to representatives of various religions engaged in intellectual debate, or the British, who (as Diane Abbott recently reminded us) enjoyed playing divide-and-rule and in any case completely lacked the resources to impose their religion on anyone.

Karen Armstrong is obviously right that for a religion or a religious institution to survive it needs to be adaptable. And some are very adaptable indeed: the Church of England, for example, has successfully (so far) preserved its official status by putting itself forward as a sort of clearing-house for faith in general rather than for Protestant Christianity in particular. It likes to pretend that it has been ever thus: the Queen, who herself embodies another institution that knows how to adapt to survive, recently praised it for having "created an environment for other faith communities and indeed people of no faith to live freely." Whereas the religious and political freedoms of non-Anglicans have been wrested, over centuries, from the usually unwilling leadership of the once dominant Church of England.

But it's a curious mistake to write off ancient paganism as hidebound and unadaptable. It was anything but. And it embodied far better than any form of Chistianity ever has Karen Armstrong's own religious ideals. It was non-dogmatic. It was a religion (or religions) of practice rather than of belief. Its narratives were grounded not in history, which invites secepticism and archaeological research, nor in texts, which invite critical analysis and source-comparison, but in the recurrent cycles of nature and in a fluid body of myth and epic. The vulnerabilities which afflict the "religions of the book", which Armstrong imagines are modern and aberrant (though ancient pagan philosophers delighted in pointing out the implausibility of the factual claims made by Christians about Jesus) were alien to the spirit of ancient paganism.

None of that could save it from Theodosius' persecution. The fact that the emperor (like Christian and Muslim rulers of other previously pagan societies who came after him) saw the need to destroy traditional religion with such violence and finality suggests that it was, after all, a tough old bird that would, if left alone, have continued to serve the needs of people humble and great for centuries to come. It remains true, however, that Theodosius' campaign was successful. Unlike Christianity, paganism could not survive sustained persecution. It was too gentle, reasonable and flexible a faith. It had no core of fundamental belief; it made no historical claims; it compelled adherence to no creeds; it didn't care what its followers actually believed, so long as they turned up to sacrifices and listened to the lyre recitals.

In other words, it was nothing like the militant fundamentalism, or for that matter the "militant atheism", of which Karen Armstrong so disapproves. It lacked conviction. When a more dogmatic creed came along it was doomed.
Email Post
Labels: Christianity Church of England paganism religion