On the Today programme this morning, ex-Canon Giles Fraser asked Richard Dawkins if he could repeat the full title of Charles Darwin's magnum opus.
"Yes I could!"

"Go on then," came the challenge. 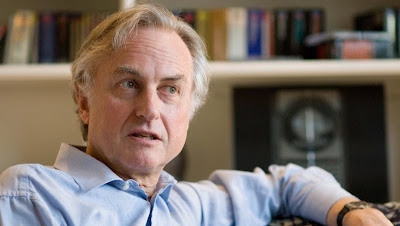 That's not bad, said Justin Webb, just a tad patronisingly. It never does to be too confident, but it was frankly painful to listen to. I was willing him on.

You are the High Pope of Darwinism. If you asked people who believe in evolution that question and only two per cent got it right it would be terribly easy for me to say they don't really believe it after all.

Having collected himself, Dawkins repaired to his website, where he protested that Fraser wasn't playing fair:

The fact that I got it in the end, thereby demonstrating that I knew it all along but was temporarily flustered by the unexpected ambush will by no means deter them!

But he didn't get it in the end. He missed out what many would consider to be the most important words of all. It is On the Origin of Species by means of Natural Selection... Even I knew that bit, though I would have missed the part about favoured races and the struggle for life.

Never mind. It was, in any case, not a good comparison because the Mori poll question was multiple choice. The polled 'Christians' were not asked "What is the first book of the New Testament?" and expected to enunciate a word-perfect "Matthew" (a one-word memory feat as opposed to the 21-word memory that was asked of me). They were only asked to choose from one of the following: Matthew, Genesis,, Acts of the Apostles, Psalms, Don't know, Prefer not to say. 39% chose "Don't know" and only 35% chose Matthew.

Well indeed. But then the people being asked weren't theologians, either. A good comparison would be for a senior clergyman - Fraser himself, perhaps - to be asked to rattle off, say, the first three verses of the Gospel According to John or name the Books of the New Testament in the correct order. Knowing the full title of The Origin shouldn't be too much of a stretch for someone who has been preaching the gospel of Darwin for the past five decades. Stephen Jay Gould wouldn't have forgotten it.

The context for this was a piece of Dawkins-sponsored research that claimed to show that Christianity was less prevalent in Britain than the oft-quoted figure of 72% who ticked the Christian box in the 2001 Census would imply. It set out to demonstrate that these "Christians" were, mostly, at best nominal believers. For a start, the researchers only found 54% who admitted to describing themselves as Christian a decade ago. Had they forgotten or changed their minds, like all those people who now deny ever voting for Tony Blair? It's not clear.

Anyway, of those self-described Christians, around half said that they did so because they had been baptised (which in most cases, of course, reflected their parents' decision rather than their own). There was a range of other responses. "I believe in the teachings of the religion" scored 18%, as did both current and past church attendance. Half never went to church at all. 17% were weekly churchgoers, a figure that rose to just shy of 30% for those who attended at least monthly.

By contrast, a mere 6% were Christmas and Easter worshippers, which implies that the custom of nominal seasonal attendance is dwindling. People either worship more-or-less regularly or not at all - a finding which some clergy may find reassuring. (Though it's a surprise to me: the carol service I went to, at Ely Cathedral, was packed, and I'm sure I was far from being the only non-believer in the congregation.) The survey appears not to have asked why the 29% of regular worshippers attended church, which seems an unfortunate lapse. It would have been interesting to know how much truth there is in the stereotype of middle class parents faking religiosity to get their kids into a faith school.

The questions that most annoyed Fraser related to people's personal beliefs: he thought it impertinent of Dawkins to want to rate self-declared believers by seeing how many points of doctrine they were willing to sign up for. He has a point there. The most relevant findings were that 30% described themselves as having "strong religious beliefs", 45% said that they were "religious" and a full 60% said that Christianity was very or fairly important in their lives. As to the influence that the religion had on their lives, the most popular response that it encouraged them to be "a good person". I don't think that implies either that they think you have to be Christian to be a good person, or that the respondents are confusing Christianity with basic humanistic morality, as Dawkins was trying this morning to imply. The religion would be pretty useless, even on its own terms, if it didn't somehow help its followers to lead moral lives.

It's nevertheless interesting to see whether most Christians really do believe the things they're supposed to believe.

The Bible is regular (weekly) reading for a mere 15%. 32% could be put down as occasional readers - anything from monthly to once in the last three years. On the status of the Bible, the most popular response (42%) was this: "The Bible is not a perfect guide to morality as some of its teachings are not appropriate today, but it is still the best guide we have." It's a view that I suspect would also have many takers among professional clergy. 61% never took part in church-based community activities; mostly, these will be the non churchgoers, but even a majority of fairly regular attendees would seem to confine their church-related activities to actual services.

On the resurrection, the orthodox view (that Jesus physically came back from the dead) was endorsed by fewer than a third; the most popular answer being that the resurrection was a purely "spiritual" event. But 44% were prepared to describe Jesus as "the Son of God and Saviour of Mankind." This would include many who don't regularly attend church. I'm not quite sure not to make of someone who believes that Jesus Christ is their saviour yet can't be bothered to worship him one day a week.

There were mixed views on such subjects as bishops in the House of Lords (most people, I suspect, just don't care) or daily worship in schools. There was no strong feeling either in favour or against teaching creationism in classrooms, the state funding of hospital chaplains or the status of the Church of England as the established religion. But on social questions there was a clear trend: those who describe themselves as Christians tend to take "liberal" positions on questions of same-sex relationships, sex outside marriage (does that one even still count?) and assisted suicide. Most dramatically, there was emphatic support (63%) for the proposition that a woman with an unwanted pregnancy should be able to choose an abortion.

Three-quarters agreed with the propostion that "religion should be a private matter and should not have a special influence on public policy. Take that, Lady Warsi.

But this survey doesn't show that most "Christians" have a merely sentimental or cultural attachment to the faith. They may not go to church very often, they may read the Bible even less, they may have only the vaguest scriptural knowledge, they may not believe in the resurrection (the virgin birth question was apparently not even asked). But that doesn't mean that they don't think of themselves as Christians or attempt to lead some sort of Christian life.

This is the constituency which Christian leaders, populist politicians and Daily Mail editorials claim to speak for when they evoke notions of Britain as a "Christian country." But the people in this survey are clearly not calling for more religion in politics, and they do not, by and large, display illiberal attitudes on social matters. Devout or lukewarm, they tend to look upon religion as a private matter, a source of moral or spiritual inspiration, not as a source of political identity. This may please Giles Fraser more than Richard Dawkins, ultimately, even though the professor claimed to have found "lots of good stuff" in the survey. It sure as hell won't please Sayeeda Warsi.
Email Post
Labels: Christianity human rights religion