Let's give the Falklands to Argentina 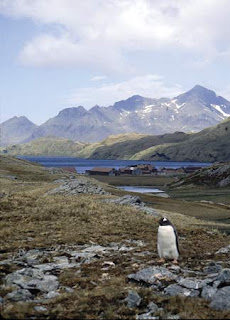 Ahead of the thirtieth anniversary of the Falklands war, there has been a big diplomatic and rhetorical effort by Argentina and its president Cristina Fernandez de Kirchner to push the country's continuinng claim over these guano-soiled lumps of rock in the South Atlantic. For his part, David Cameron has been striking Churchillian poses, dispatching Prince William and sending what is apparently our one decent warship to deter any (highly unlikely) Argentinian military moves. What nonsense. If the Argies want the Falklands so much, why don't we just hand them over?

I do not, of course, say that we should give the islands "back" to Argentina. That would be absurd, since they never had them in the first place. The Argentine claim is weak in international law and weaker still in morality, and any repudiation of British sovereignty over the territory should be on the understanding that this is an entirely voluntary act of friendship and self-renunciation.

Ideally, it would be accompanied by a declaration from the international court that British sovereignty is legitimate and inviolable, as it clearly reflects both the history of the islands and the present reality. But if that cannot be obtained, a simple assertion by Britain of its historic position should suffice. Just so long as it is understood that renouncing the islands is not a concession to Argentinian pressure, indeed no concession at all, but rather something that is in Britain's own self-interest.

It is embarrassing and counter-productive, in the 21st century, to still be flying the flag over insignificant lumps of rock half a world away. So Port Stanley has red-pillar boxes and fish-and-chip shops? There are Welsh-speakers in Patagonia, who have been happily Argentinian for two hundred years. There are communities in this country who maintain cultural traditions imported from their distant homelands, who nevertheless are fully British. Whether the ultimate suzerain of the Falklands/Malvinas sits in Buckingham Palace or in the Casa Rosada will make very little difference to the lives of the people who live there. They may well find themselves better off under the benign auspices of a geographically proximate democracy rather than, as at present, under what amounts to a military occupation.

It would be hard to deny that the Falklands are a relic of colonialism. They are British because the British settlement established there in the 1830s survived while earlier British Spanish, Argentine and Dutch settlements were either pushed out or died a natural death. The continuing "dispute" over their sovereignty - in other words, Argentina's continued campaign on the issue - is damaging to British strategic interests and, especially, commercial prospects in an increasingly significant area of the world.

It doesn't matter that Argentina lacks a good case, or that its obsession with these under-inhabited rocks borders on the pathological. What matters is that it has opinion in Latin America sewn up; and, I suspect, a friend in the Obama administration as well as in Sean Penn. The merits of the case matter less than the perception: to outsiders as well as to leader-writers at the Guardian, the British position looks like an outdated colonialism. And as long as that perception is maintained, as it will be, as long as Britain appears (even to the Americans) to be pig-headed and unwilling to negotiate a diplomatic solution, the Falkland Islands dispute will continue to overshadow and stymie Britain's ability to do business, not just with Argentina but with most of the other countries of Latin America.

To hand the islands to Argentina would of course be to sacrifice the wishes (if not necessarily the best interests) of its inhabitants to international realpolitik. It would, ironically, be far more "colonialist" than the current British policy of selflessly deferring to the islanders' views. Proponents of negotiating with Argentina tend to downplay this or ignore it altogether, but it must be faced head-on. Would it be a "betrayal" of a small, brave, loyal people who have proudly flown the flag for Britain? Perhaps. But what, frankly, have the Falklanders ever done for us, apart from costing the British taxpayer a great deal of money and helping to provide Margaret Thatcher with a crucial election victory in 1983? Not much. Why should the wishes of three thousand islanders outweigh the interests of the sixty-odd million of us who live on the British mainland?

If the Falklanders are so desperate to remain British then they can come and live here. There are only a few thousand of them, after all: we're hardly talking about mass immigration. If they are congenitally wedded to sheep and desolation there are plenty of under-populated islands in Shetland or the Hebrides. We could even import some penguins to cheer them up: it would be a lot cheaper than maintaining an armed garrison.

Alternatively, if there are too many qualms about blatantly ignoring the inhabitants' right to self-determination, Britain could just pull out, declare the Falkland Islands independent and tell them that, from now on, they're on their own. Rather as the emperor Honorius did to the ancient Brits in 410 AD. The Falklanders might well groan. They might find their economy unsustainable without continued subventions from London. In which case, they would always have the opportunity enter into a union with (relatively) nearby Argentina, who would be so delighted to take them on at almost any price.
Email Post
Labels: Falkland Islands history Politics