Oh dear. It looks as though I'm going to have to come to the defence of Trevor Phillips. 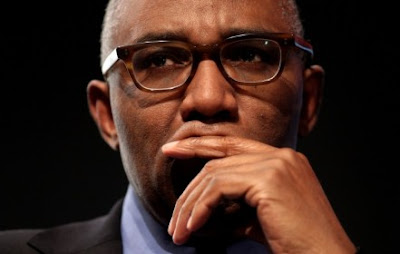 The Telegraph today is leading on remarks the Equalities Commission chairman made more than a week ago at a seminar on the subject of "superdiverse" societies. He is said to have told Christians that they "must choose between their religion and obeying the law." He "singled out the adoption agencies that fought a long legal battle to avoid being forced to accept homosexual couples under equality laws." The killer quote, in the paper's view, was the following:

To me there’s nothing different in principle with a Catholic adoption agency, or indeed Methodist adoption agency, saying the rules in our community are different and therefore the law shouldn't apply to us. Why not then say sharia can be applied to different parts of the country? It doesn’t work.

The Telegraph found some "legal specialists and religious leaders" to denounce Phillips, presumably just going on what its journalists told them he'd said. No surprise that Lord Carey, former archbishop turned pain-in-the-arse, was prominent among the rentaquotes. He described the comparison with Sharia as "ridiculous". We need lawmakers to respect the country's Christian heritage and "seek accommodation wherever a strongly held faith seems to clash with new legislation". Wherever? Presumably that would include Sharia, then, George?

Not to be outdone, Michael Nazir-Ali, the former Bishop of Rochester, claimed that Phillips was implying "a totalitarian kind of view in which a believer’s conscience should not be respected." Presumably he was echoing Baroness Warsi's silly comments the other day in the Telegraph about "militant" secularists displaying "similar traits to totalitarian regimes."

Then there was Neil Addison, a barrister and author of the Religion Law blog. He denounced Phillips Commission as being "so obsessed with equality that it has lost sight of freedom." On the other hand, the National Secular Society's Keith Porteous Wood, who has recently been highly critical of Phillips, was on his side for once, calling his remarks "absolutely right". There's balance for you.

The Telegraph report is based on one in the Tablet, but with the hysteria cranked up a notch or two, the better to drive home the paper's regular themes of Catholic victimhood, the threat of Islam and the organised craziness of the Equality and Human Rights Commission. But the report is almost entirely bogus.

As is much of the response to it. "Trevor Phillips is foolishly stoking Christianophobia and inciting hatred," says Cranmer. Tosh, Your Grace. Tosh and twaddle and hysteria-mongering, as well you know.

The event isn't named in the report, but it was organised by Lancaster University and the think tank Theos and took place last Wednesday at the Royal United Services Institute. A full (hour and a half long) video of the debate is up at YouTube; suffice to say that it was moderate in tone and occasionally soporific. On the panel were two academics, Trevor Phillips and the Attorney General Dominic Grieve. The latter two agreed on almost everything (Phillips noting how embarrassed he felt to be agreeing with a Tory). It was chaired by the former Labour Home Secretary Charles Clarke.

Phillips prefaced his remarks by saying that "People in my office who spend their lives trying to stop me being an arse said to me this afternoon, Try really hard not to be interesting." He did however say one fairly interesting thing, which was that in his opinion there was no conflict between the rights of various groups recognised under equalities laws. He said:

There is a theoretical possibility that preventing discrimination against one group on the basis of religious or racial equality may lead to some consequent disadvantage on the part of another. No-one has yet shown me a real-world example where that happens. Therefore, the idea of "conflict of rights", I think it's rubbish. I don't believe it. There are laws about discrimination, and actually they're quite clear. And the fact that you protect one person against discrimination does not at all lead to the proposition that that person has more rights than anyone else.

Not everyone will agree with his scepticism about conflicts of rights. I for one find extraordinary his implicit claim that there was no conflict, at least between the perception of the rights of guest-house owners Peter and Hazelmary Bull and those of the gay couple who were refused a double bed in their establishment. Self-evidently there was such a conflict, even if the law now has a clear view of the matter and favours the gay couple's right to non-discrimination over the Christian couple's freedom to run their establishment along religious lines.

If you want to make a case that a secularist establishment is trampling arrogantly over the religious freedoms of believers, then Phillips' incomprehension that the conflict of rights even exists would be a good place to start. But as I said, Phillips isn't a hero to secularists either. He has been known to say things such as "our business is to defend the believer." I think he's just in denial about possible flaws in the current one-size-fits-all equality framework.

But this apparently wasn't interesting enough for a journalist from the Tablet who was in the audience. In the Q&A that followed he pressed Phillips on the subject of the Catholic adoption agencies, no doubt hoping to get material for a story. Phillips did not, as the Telegraph claims, "single out" the adoption agencies for criticism. He was responding to a direct question.

Dominic Grieve, who answered first, said almost precisely the same thing as Phillips -- although the Telegraph did not see fit even to mention his presence at the seminar, still less to report his comments. Grieve said that the tension between equality and freedom of conscience was going to be a topic of debate "for a very long time to come.

Adoption agencies richly highlighted one of the big conundrums. My personal view is that those who are providing public services which are funded by the state cannot discriminate, but that is a different thing from recognising and acknowledging that faith groups may provide services which are restricted to their faith community but which nevertheless have a wider public benefit.

I agree entirely with Dominic. The law stops at the door of the temple so far as I'm concerned. When you're inside the church, inside the temple, you're governed by what you are. But once you start to provide public services that have to be run under public rules, for example child protection, then you have to go with public law... You can't say that because we decide we're different we have a different set of laws. That, by the way, er, to me there's nothing different in principle between a Catholic adoption agency saying "the rules in our community are different and therefore the law shouldn't apply to us", why not then say, "Okay, then Sharia law should apply in certain parts of the country." It doesn't work.

I agree with Trevor. In fact, I find his remarks here far more reassuring than, for example Rowan Williams' suggestion a few years ago that it was "unavoidable" that Sharia law would be recognised in Britain and that it was "a bit of a danger" in an approach that said "there's one law for everybody and that's all there is to be said." Because there is one law for everybody and that is all there is to be said.

The main point, though, is that Trevor Phillips wasn't telling Christians to choose between the faith and the law or comparing Catholic qualms about gay adoption "with draconian punishments such as stoning adulterers to death", as the Telegraph implied.