Obama and the Catholics 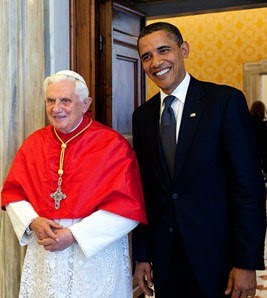 Tim Stanley, on the Telegraph blog, accuses Barack Obama of engaging in an "un-American" war on Roman Catholicism, "nothing less than a secular Jihad". Janet Daley suggests he has been "startlingly foolhardy" to have "provoked outrage in the Catholic Church and thus in that huge US constituency – now larger than ever due to a vast increase in the Hispanic community – which takes its Roman Catholic faith very seriously." We'll come to that later.

Daley and Stanley are merely echoing views on the other side of the Atlantic. For example, John Boehner, Speaker of the House of Representatives, called the measure "an unambiguous attack on religious freedom". It "must not stand and will not stand," he declared. Washington Post columnist and liberal Catholic E.J. Dionne accused the president of "throwing his progressive Catholic allies under the bus." Strong stuff. But not as strong as Timothy George and Chuck Colson, two leading Evangelical pastors, who in an open letter entitled "First they came for the Catholics" compared Obama's healthcare reforms to "the Nazi terror". Yes, really.

Three years ago, when we co-authored the Manhattan Declaration, we predicted that the time would come when Christians would have to face the very real prospect of civil disobedience—that we would have to choose sides: God or Caesar. Certainly for the Catholics and for many of us evangelicals, that time is already upon us... We do not exaggerate when we say that this is the greatest threat to religious freedom in our lifetime.

The proposal, remember, is that all employees, even if they work for, say, Catholic-run schools, should have access to birth-control as part of their health insurance. Should they want it.

Why so much outrage? It sounds as though Catholic leaders (and their supporters) have been knocked sideways that the admininistration has had the temerity not to want to treat all citizens equally. Stanley reminds readers that other Democrat presidents cosied up to the church hierarchy, disguising their support for abortion (or even, like Jimmy Carter, cutting federal funding for terminations) because "they never wanted to upset one of their biggest allies in the historic fight for social reform."

But not Obama, whose proposals to force organisations (even Catholic-run organisations) to offer contraceptive services as part of employee healthcare scheme have been denounced by bishops, Catholic commentators and Mitt Romney as violating the sacred American principle of freedom of conscience. Which in this case means the freedom of employers to exercise their conscience on behalf of, and potentially against the wishes of, their employees. Who might not be Catholics at all. Or they might be among the overwhelming majority of American Catholics who routinely and more-or-less happily ignore the Vatican's teaching on birth control.

Obama’s attempt to force Catholic employees to provide contraception coverage in employee healthcare plans has united the entire Church establishment – Left and Right – against him. And this is the establishment that garlanded him with honours three years ago at Notre Dame University, despite his aggressive support for abortion.

Bishops, conservative and liberal, are now a single voice in their disgust with the administration’s move. The scale of Left-wing outrage is astonishing. Even the columnist EJ Dionne – the Polly Toynbee of American Catholics – complained that “progressive” Catholics who had put their reputations on the line to support Obamacare had been “thrown under the bus.” Obama took 54 percent of the Catholic vote in 2008. He will struggle to do that well again.

So -- it's the "Catholic establishment" that Obama is at war with. Not Catholics in the pews. An important distinction worth bearing in mind. I suppose this display of righteous theological fury is what Dr Ratzinger had in mind when he told US bishops a few weeks ago that they had a duty to interfere more in politics:

[I]t is imperative that the entire Catholic community in the United States come to realize the grave threats to the Church’s public moral witness presented by a radical secularism which finds increasing expression in the political and cultural spheres... Many of you have pointed out that concerted efforts have been made to deny the right of conscientious objection on the part of Catholic individuals and institutions with regard to cooperation in intrinsically evil practices [he means gay marriage]. Others have spoken to me of a worrying tendency to reduce religious freedom to mere freedom of worship without guarantees of respect for freedom of conscience [he means contraception and abortion]...

In this regard, I would mention with appreciation your efforts to maintain contacts with Catholics involved in political life and to help them understand their personal responsibility to offer public witness to their faith, especially with regard to the great moral issues of our time: respect for God’s gift of life, the protection of human dignity and the promotion of authentic human rights... [R]espect for the just autonomy of the secular sphere must also take into consideration the truth that there is no realm of worldly affairs which can be withdrawn from the Creator and his dominion.

It looks like the bishops have been following their orders to the letter.

But what about ordinary Catholics? Here the picture changes. Polling by the Public Religion Research Institute found that a majority (55%) of Americans agreed with the Obama proposal that "employers should be required to provide their employees with health care plans that cover contraception and birth control at no cost."

Among Catholics, the figure is 58%. That's right. The proportion of American Catholics who support the measure is actually higher than among Americans as a whole. Worshippers in the pews are not going along with their leaders' bluster, which is all that Stanley or Daley can hear. It's true that among white Catholics, a key voting bloc (likelier to vote than Hispanics, for one thing) support for the measure is lower, at 50%. But that's still higher than the proportion who oppose it. It's identical to the figure for "mainline" white Protestants, incidentally. Support for the measure is lowest among white evangelical Protestants, which may go some way to explaining this week's swing to Rick Santorum among Republicans in Minnesota and Missouri.

Despite this, its opponents seem to have the Obama administration on the run. The White House has been caught off guard. Talk of compromise is in the air. The bishops and their allies have successfully framed the issue as one of religious freedom rather than one of individual access to healthcare. That's not just hysterical, crackpot thinking: it's also profoundly illiberal. The consciences, opinions and right to self-determination of employees has scarcely featured in the debate. Since when did religious freedom include the right to inflict your scruples on your workers' private lives? That's not freedom; it's tyranny.
Email Post
Labels: catholicism health Obama Pope religion US election