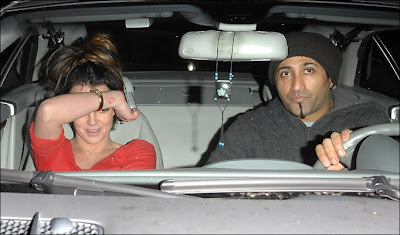 So it's over. Adnan Ghalib, from Pakistan (or is it Afghanistan?) is well and truly dumped, Birmingham bound with only his intimate snaps and world exclusive tabloid deals for company. And the word is that this 24 carat ratbag plans to tell all about his brief but incident-packed relationship with "troubled star" Britney Spears. Not that he hasn't told an awful lot already. According to the News of the World the other week,

But while telling close family that he only wants the best for Britney and sincerely cares for her, Ghalib has rung old mates from his days as a teenage radical to tell of their sex romps together.

One pal told us: "Last week he called to say how she is amazing in bed and gets turned on by him talking dirty in his Brummie accent. Adnan says she takes lots of prescription happy pills to get her high before getting really filthy in the bedroom."

Sudden trips to Mexico, naked romps in clothes-store cubicles, pregnancy rumours, marriage-rumours, restraining order rumours; this story has had a lot of rumours. And a lot of photos.

But it also has an intriguing cultural sub-plot. For Adnan Ghalib, in addition to being a society photographer, is also (theoretically at least) a Muslim. And as we know, Muslims are all seething fanatics seeking to blow us up, impose Sharia law or indulge in multifarious other (according to the approved Jacqui Smith version) "anti-Islamic" activities. Or else they are uniquely devout, humble, public-spirited followers of the "religion of peace" who wish to be left alone to grow their beards, wear their hijabs or broadcast their calls to prayer all over Oxford.

But Adnan Ghalib is neither of these things. He wants to have a lot of sex with a famous singer, and then make a lot of money by selling his story. A not incomprehensible ambition for a modern man; Ghalib is only exceptional in having succeeded. To the current media mindset, however, it would be difficult to imagine anything quite so un-Islamic. It just doesn't compute. It's almost a category error.

So how to deal with it? One response is to play up the culture-clash angle. The News of the World reported that Ghalib's "respectable Sunni Muslim family" were "so horrified by his antics they have disowned him".

One family member told us: "His parents Ghalib and Saghra are devastated. This week his dad gave him an ultimatum, ‘Give up Britney, or you are dead to me,' which Adnan ignored."

Meanwhile the Daily Mail delved into Ghalib's "traditional" background, contrasting his childhood home in a "humble terraced house on a predominantly Muslim street" with his life in California where he "managed a strip bar before branching out as a paparazzo."

Adnan was the second of four children, all raised as strict Muslims by their devout parents.

They are respected members of the local community, and today Hussain still regularly attends Small Heath's Central Mosque, while Saghra, who wears traditional dress, continues to teach the Qur'an to local children from the family home's sitting room. Both Ghalib's sisters, Farrah, 36, and Aisha, 30, are understood to be in arranged marriages.

But of course a Muslim, however westernised, however anomalous, is still a Muslim, and we all know what that means. The Screws reported a bizarre rumour that the star was considering converting to Islam in order to marry Ghalib:

In her crazier moments she's even been threatening to fake her own death to start a new life with him in Pakistan.

This was a prospect that appealed to the Hindustan Times, which brought up the (to it) similar cases of Jemima Khan and Princess Diana. Its reporter wondered if the sleazy paparazzo was possessed of the same mysterious Asian glamour as the brilliant surgeon Haznat Khan and the cricketing legend Imran.

I think Pakistani men are more committed and, of course, the Pathan genes hold them in good stead. Britney Spears is hardly a good example - well, she could fall for anyone - but we have had Jemima and Diana too falling for Pakistani men.

Meanwhile, the Daily Star, a publication that prefers to make up its own stories, tantalised readers with the prospect of Britney in a burqa:

SINGER Britney Spears will be ordered to cover her face with a veil and wear a full-length Islamic dress when she weds her British boyfriend, it was revealed last night. She is planning marriage No3 to Muslim Adnan Ghalib, 35, who she hopes will help keep her on the straight and narrow so she can win back custody of her two sons.

But the only way Brummie cameraman Adnan’s strictly religious family will accept her is if she converts to the Islamic faith.

Astonishingly, party girl Brit, 26, is keen to do it – even though it will mean ditching the booze. The singer, famed for stepping out without her knickers, has even told friends she plans to wear a burka, or even a naqib, which leaves only the eyes visible.

Astonishing indeed. And, of course, utterly ridiculous. Although the Star apparently found a "pal" of the singer who claimed,

She is really keen to do it. It would be a mark of respect to Adnan and his family, and it would give her the anonymity she’s craving. Adnan’s Muslim beliefs could be Britney’s saviour.

Ah yes. Adnan's "Muslim beliefs". Which would appear to be remarkably flexible, if indeed they could be said to exist at all. But therein lies the undeniable slipperiness of the term "Muslim", which is responsible for much of the current confusion. Does it define a religion, or an ethnicity? Is there even such a thing?

Last November, a survey commissioned by soon-to-be-deposed London mayor Ken Livingstone complained about "Islamophobia" in the British media. Taking a "random" week in 2006, a week which just happened to include the publication of an inquiry into the Underground bombings of the year before, the report's authors described 91% of the stories they analysed as "negative" in their portrayal of Islam and Muslims.

For example, accounts of the conviction of the boxer "Prince" Naseem Hamed for dangerous driving were described as "negative". Hamed's religion wasn't actually mentioned in most of the stories, but he has an obviously Muslim name. So the mere act of reporting this newsworthy event was obviously Islamophobic.

Tricky one this. On the one hand, Ghalib is a shining example of integration. The Star's rabid imaginings aside, religion had nothing to do with it. Others from his background have taken the trip to Pakistan and ended up in al-Qaeda training camps or Guantanamo Bay; Adnan boarded a plane for LA and bedded a pop star. A far better result, one would think, for both him and us. Proof that a Muslim doesn't have to be born a Saudi prince to enjoy everything the West has to offer. Yet is this not the very type of corruption against which the radical preachers are forever declaiming? Is he not a horrible example of western decadence, another reason to cleave ever more closely to traditional values, the mosque and the veil?

Are we meant to think that Britney had a lucky escape, or is the politically correct response to regret that she did not, after all, pronounce the Shahada and swap her kinky boots for the Koran? Or perhaps that's the morally-censorious, pro-traditional family, Daily Mail, position? Confusing.

UPDATE: Did I write this too soon? Some sources are now reporting that Britney and Adnan are back on again. But I still don't think we'll be seeing her in a burqa any time soon.

Ala said…
I don't get the point of this article. This Adnan dude appears to be a lapsed Muslim, not an untold phenomenon. Of course, just as it is with Sikhs and Jews, your Muslimness is something you can't shake off, whether you're a rockstar, atheist or member of the Tory party. It would explain the need for a Britney conversion: it's just a cultic formality.
8 August 2008 at 13:08