The God-fearing loons at the Westboro Baptist Church are clearly on a roll. On Tuesday they greeted the sad news of Heath Ledger's death with a charmingly-worded press release calling his best-known film Brokeback Mountain a "sordid, tacky bucket of slime seasoned with vomit" and assuring the world that he was now in Hell (to be joined presently by the Pope, George W.Bush, Billy Graham and so far as one can tell, everyone else who wasn't a member, in life, of the Westboro Baptist Church). They will be picketing his funeral, just as they regularly picket the funerals of US service personnel killed in Iraq and Afghanistan, with their easily recognisable "God Hates Fags" placards and other similar expressions of Christian love. 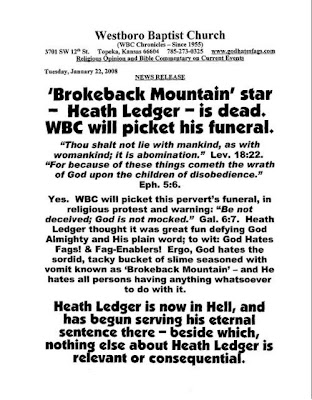 And now, as a follow-up, they have announced plans to capitalise on the Ledger publicity by picketing the Oscars. If, of course, there are any Oscars: the Westboro folk may well be joined by other, better-organised and more literate protesters.

According to their latest statement, "the entertainment industry has created an evil, poisonous Zeitgeist in which sodomy and all lesser forms of perversion now flourish."

And then, bizarrely, there's an outbreak of pedantry:

Hollywood is here put for the entire worldwide entertainment industry. This is a form of speech known as a synecdoche; part put for the whole.

Just so as to get the most from their time in LA, they also plan to protest outside two local churches, one Catholic and one Episcopalian, for "their part in creating the Zeitgeist of evil in which the sin of sodomy flourishes throughout America."

They're a canny bunch, these God-botherers. A fringe of a fringe, they appear to consist mainly of members of the Phelps family and assorted hangers-on. Founder Fred Phelps, 78, claims to teach mainstream Calvinist theology. His single-minded obsession with "sodomy" is, however, entirely his own. According to the church's website, the best-known Phelps slogan, "God hates fags" is "a profound theological statement, which the world needs to hear more than it needs oxygen, water and bread." But it's not just homosexuals who are bound for the brimstone,

To every lover of lies, believing and preaching that God loves every individual of mankind, we say, You are going to Hell! Period! End of discussion! God's decree sending you to Hell is irreversible! Hypocrites! How can ye escape the damnation of Hell?

They claim to have carried out more than 33,000 anti-gay demonstrations, mainly at funerals and gay rights events. "The unique picketing ministry of Westboro Baptist Church has received international attention," they boast. And not without reason. Like many in Britain, I first heard about the Westboro Baptists when Louis Theroux made the trip out to the small town of Topeka, Kansas to film them last year. He smiled indulgently while they assured him he was going to Hell. They were also visited by Keith Allen for another documentary, memorable for the moment when he mistook a picture of Lily Tomlin for one of his daughter. It's Heath's funeral, however, that looks set to give them their biggest opportunity yet.

Given that they look so much like a parody of hellfire Bible Belt fundamentalists at their most rabid, it's perhaps not that surprising that some have wondered if the Phelps clan are for real. Chez Pazienza in the Huffington Post has fun imagining the Westboro church as "Andy Kaufmanesque performance art at its most sublime." More mainstream representatives of religious reaction find themselves acutely embarrassed by Phelpsite antics, not least because they're unable to fault their theology. Calvinism aside, what is the real difference between Phelps and the Nigerian archbishop Peter Akinola and his fellow wreckers of the Anglican communion? Or indeed the Pope?

If nothing else, the unfettered activity this hateful group of "Christians" provides ample testimony to the American attachment to free speech. In Britain, Parliament is currently debating proposals to further extend the domain of prohibited "hate-speech" to include remarks deemed homophobic, legislation that has worried several religious groups who fear that they would be deliberately targeted. And even without these new, explicit, provisions, accusations of homophobia have led to police investigations of several prominent activists; which have led in turn to complaints of victimisation, witch-hunts and that old standby "political correctness gone mad".

Planet Apex said…
Hi,
I found your Britney's Islamic Panic post very interesting and informative. You've a lot of talent in writing too. I'm a Muslim btw.
26 January 2008 at 02:38