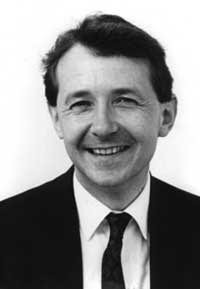 The story of the twins who allegedly got married, only to discover their relationship and seek a High Court annulment, continues to be reported uncritically by news organisations around the world. BBC News gave it prominent coverage on all its major bulletins last night, and the sensational tale has been reported as far afield as India and New Zealand.

So far, however, there remains only a single source for it: a speech by Lord Alton in the House of Lords. Since this story made international headlines yesterday, it's a little surprising to discover that he made the speech, in a debate on the Human Fertilisation and Embryology Bill, a whole month ago, on December 10th 2007. Anyway, this is what Lord Alton, a former Lib Dem MP who is now a cross-bencher, told the House:

I was recently in conversation with a High Court judge who was telling me of a case he had dealt with. This did not involve in vitro fertilisation; it involved the normal birth of twins who were separated at birth and adopted by separate parents. They were never told that they were twins. They met later in life and felt an inevitable attraction, and the judge had to deal with the consequences of the marriage that they entered into and all the issues of their separation. I suspect that it will be a matter of litigation in the future if we do not make information of this kind available to children who have been donor conceived.

That's it. No names, no dates, no context, no evidence. And that is where it might have remained, buried away in the pages of Hansard. Except that some eagle-eyed journalist (come forward and take your bow) happened upon it. As it sped around the world, it became, as such stories tend to steadily more specific in its details, until the News of the World, in its appeal for information, is able to claim,

Their marriage was annulled at the High Court at a special hearing held within the last 12 months.

What's their source for this assertion, I wonder?

The Sun has made a particularly big splash of the story. Twins' Plight Cruel Beyond Belief proclaimed their headline, above a story rich in the deathless prose for which that august journal is justly famed:

The smitten brother and sister — adopted by different families — discovered the shattering truth only after tying the knot.

Against all odds they had met and fallen for each other — neither even knowing they had a twin.

The horrified British couple faced the heartbreak of seeking to have their marriage annulled in the High Court after eventually finding out their love was forbidden.

Lacking what they really wanted (Do you know the twins? Call us!) they were forced to fall back on a roll-call of experts.

Their mannerisms — and even their odour — would remind them of themselves.

Not to mention their birthdays.

Psychotherapist Audrey Sandbank, a consultant for the Twins and Multiple Births Association, said:

These twins were together until they were born and may have had a strong connection in the womb. When they met they would have felt like soul mates — particularly as like all siblings they shared approximately 50 per cent of their genes.

Would have felt like soul mates? How does she know? Many brothers and sisters can't stand each other.

Then there's the inevitable Dr Glenn Wilson, who told the Sun:

If you are raised separately from a close family member there is a tendency to experience a powerful lightning bolt attraction to them if you meet later in life. It can be an incredibly intense response and almost impossible to resist.

Genetic Sexual Attraction is, indeed, a recognised phenomenon. But almost all the recorded cases relate to people who met each other knowing their backgrounds. It's impossible to say to what extent knowledge of the relationship, however taboo, influences the tendency to GSA. Meeting a long-lost (or never-found) relative is an intensely emotional experience under any circumstances. Would there be the same attraction if you never realised that you were related? One can only speculate.

But what of the man behind these lurid headlines, what does he have to say for himself?

Speaking to The Sun last night, he admitted:

I don’t know if the judge was hearing the case himself or if it was simply one he was familiar with.

Say what? So when he told the House of Lords that the judge he was speaking to was the judge who decided the case, he wasn't telling the whole truth.

At this point, and pending the discovery of the couple involved (Do you know who they are? Phone the Sun and make your fortune) the story hits an impasse. Just another tall tale told by a friend of a friend. Or, in this case, a friend of a judge.

It does, however, have an extraordinary resonance. It's the sort of storyline one might expect from Neighbours. On a slightly more elevated level, it reminds me of the plot of Wagner's Die Walkurie, in which the separated twins Siegmund and Sieglinde meet by chance, feel a powerful attraction, discover that they're related, and only then have sex, engendering the mighty hero Siegfried whose story fills the remaining two operas of the Ring cycle.

It's this mythic quality, I suspect, that gives the story its power. That and the way in which it taps into more contemporary concerns about personal identity, genetics and scientists "playing God". Bear in mind that Alton raised the alleged case in the context of a bill mainly concerned with fertility treatment. This is an area which raises these issues in a stark sense, for we are told, over and over, by science and popular culture, that genetics is identity; that if we don't know our true genetic origin then we are missing "a piece of ourselves". It is precisely this firmly embedded modern attitude, the belief that nature trumps nurture, that the practice of adoption calls into question. "I'm adopted" says the adoptee. "I want to know my REAL parents". Genetics defines "real".

The story also invokes the powerful (and perversely attractive) taboo of incest. Add to that the dislocating effect of modern atomised societies, where few people know every detail of their family tree and it seems entirely possible that the neighbour you barely speak to might be a long-lost cousin; and the natural "wow factor" of any story involving statistically improbable events; and it's no wonder that the press leapt on Alton's tale like a starving dog devouring a juicy bone.

Surely, though, they should have treated it with an ounce of scepticism. The story hangs by a single thread, the credibility of Lord Alton himself, and his claim, which he quickly retreated from, to have spoken to the judge involved. Is the mere fact that he is a member of the house of lords enough to verify a tale that has all the hallmarks of an urban myth? Has no attempt been made to find an independent source?

Of course, there's no perfection in journalism. And journalists are, perhaps, to be forgiven when they fall for a well-laid hoax put up on Facebook or Wikipedia, as in the recent case of Bihawal Bhutto. But this is a story which cries out for some good, old-fashioned investigation.

They could start with Alton himself. In March 2002 Alton chaired a meeting in Parliament at which "satanic ritual abuse expert" Valerie Sinason presented her dubious claims that children were being abused by hooded devil-worshippers all over Britain. This despite the fact that these claims had been comprehensively dismissed in 1994 following a 3-year Dept of Health enquiry. One of Alton's guest experts claimed that the abusers had Masonic connections. 'Nuff said.

A man so pathologically gullible is likely to have seized on the recycled piece of legal mythology pedalled by the off-duty judge and polished it into a "recent case decided by the High Court" (itself unlikely, since annulments sought on straightforward grounds, and the supposed facts here were very straightforward indeed, are usually dealt with by lower courts). Bless him, he didn't even realise it was particularly big news, just an eye-catching plank in his argument for transparency. For a month, it laid dormant. Until a bleak January day when Peter Hain was in severe trouble with his accounts.

A story, thankfully, that the press seems eager to investigate in more detail. Though even here, they're more than a little late.

Anonymous said…
Very convincing. But I think the press probably did try to check the story: I read somewhere that the High Court had "refused to confirm" it.
14 January 2008 at 10:45