He should be so lucky 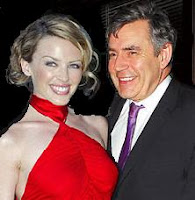 Kylie Minogue is very dear to the heart of our Prime Minister. According to Piers Morgan, writing his column in the Mail on Sunday's Live magazine, Gordon Brown buttonholed him during a recent dinner-party at Chequers and began waxing lyrical about the strangely ageless Aussie songstress.

Those Minogue sisters are quite something, aren't they? Kylie, especially. I met her the other day and she knows exactly who she is, what she's about and where she's going. I thought she was very impressive.

I suppose knowing who you were and where you were going would seem very impressive to Gordon, who looks increasingly unsure what day of the week it is. Or perhaps he's feeling a tad jealous of his pint-sized French rival, Nicolas Sarkozy, currently swanning around with the luscious Carla Bruni.
Email Post
Labels: Gordon Brown